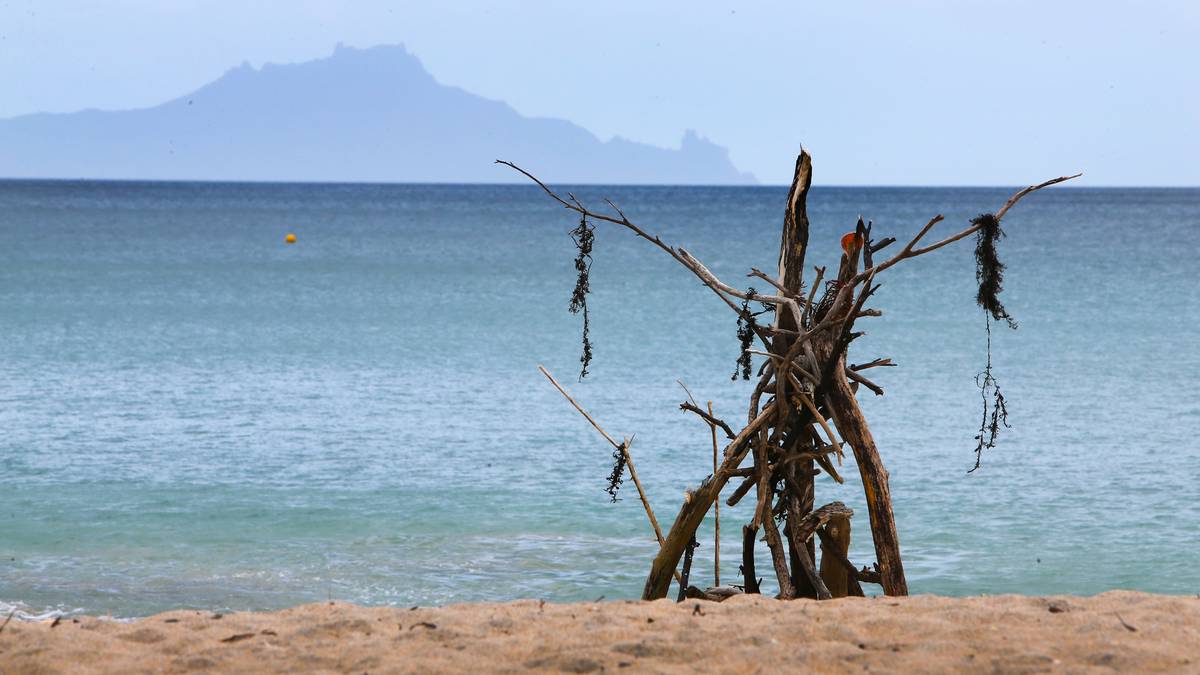 An improvised Christmas tree on Langs Beach, where hopes of a dry Christmas Day have been boosted by the latest MetService forecast. Photo / Tania Whyte

Fifty per cent odds of a mostly dry day and only a 10 per cent risk of serious rain — that’s the latest outlook for Christmas Day in Northland.

The more positive forecast is an improvement from earlier in the week when the signs pointed to continued rainy, unsettled weather.

MetService forecaster Lewis Ferris said he couldn’t make definitive predictions this far out but he could be certain of one thing.

“It’s December 25 and you’re talking about Northland, so it’s probably going to be warm.”

Data suggested a maximum of about 25C though that would vary around the region. An onshore breeze or proximity to water could reduce that by a few degrees, while it could be slightly higher in sheltered areas inland.

Ferris said he wasn’t even going to attempt picking between clear and cloudy skies but he was willing to take a punt on rainfall.

“It looks like there’s a pretty good chance we’ll have high pressure around our shores on the 25th. That doesn’t guarantee everyone will have a settled day but it would at least be some sort of prevention against a big rainfall system coming too close. I’d say there’s a 10 per cent risk of quite a wet day and a 50 per cent chance of a mostly dry day.”

Anyone trying to plan ahead for the day should keep an eye on the forecasts, he said.

On Wednesday MetService would issue a firmer forecast but even five days out there could still be significant variance.

Earlier data had pointed to “quite a wet day” around Northland but that risk had now receded.

“It might just pan out all right,” Ferris said.

While the unusually wet lead-up to Christmas has put a dampener on some holiday plans, it does come with a silver lining — an almost zero chance of water restrictions in the Far North during the Christmas break.

In recent years water supplies across the district have come under extreme pressure in summer due to a combination of dry weather, inadequate infrastructure and an influx of holidaymakers.

The hardest-hit areas are usually Kaitāia, Kaikohe and the tourist hotspots of South Hokianga and Paihia/Waitangi in the Bay of Islands.

However, the chance of water restrictions during this year’s Christmas break was almost zero, the Far North District Council said.

The National Institute of Water and Atmospheric Research (Niwa) had predicted normal or above normal rainfall until Boxing Day, with the current La Nina weather system expected to deliver enough rain to rule out a drought for at least the next 35 days.

Soil-moisture levels in the Far North, which were badly affected by the 2019-20 drought, were now 60-70mm higher than at the same time last year.

Niwa would provide a longer-term forecast next week but it appeared unlikely water shortages would be a feature of early 2023.

Also, the completion of the Kaitāia Water Project, which could supply an extra 5000cu m of water per day from the Sweetwater aquifer, had significantly boosted the town’s drought resilience, a council spokesman said.

Finally, for younger Northlanders concerned about the impact of La Nina and potential low cloud or rain on Santa’s flight path, the big guy had a reassuring message.

While he could not be contacted directly — an out-of-office message said he was busy in the toy factory — an assistant said deliveries to New Zealand would go ahead as usual.

If anything, his reindeer, which were accustomed to blizzards and sub-zero temperatures at this time of year, performed better in cool, overcast conditions than in a classic Kiwi summer.

Making the most of an indoor Christmas

What if Christmas does turn out to be rainy and grey? That might spoil your plans to head to the beach but it doesn’t have to mean a lacklustre celebration. Here are a few ideas from the Yuletide experts in the Advocate newsroom.

■ Camp out in the living room. Make a tent from sheets or pillows or whatever. Pretend you’re in an igloo staving off cold and marauding penguins. Then crack out some books and read out the kids’ favourite stories. Reading to children has been shown to boost their language skills and help cognitive development.

■ Compile a list of all-time favourite Christmas movies and binge-watch. How about Home Alone, Love Actually and How the Grinch Stole Christmas for starters? Make a batch of popcorn and settle in for a movie marathon.

■ Pretend you’re in the Northern Hemisphere and make mulled wine. It’s warming, easy to make and always a hit. All you need is a dark, fruity red wine — the inexpensive ones are fine — and spices such as whole cinnamon, star anise and cloves. A simmer pot is ideal but any big pot will work. The internet abounds with recipes.

■ Do some home baking. Gingerbread men are ideal. It’s fun for the kids, the house will smell amazing, and there’s a reward at the end.

■ Introduce a bit of healthy competition and stage your own family version of MasterChef. So you have hardly any ingredients left? It doesn’t matter, that just ramps up the challenge.

■ Remember the one thing children really want, way more than fancy presents, is undivided attention from the adults around them. Dreary weather might limit your outdoor options but it’s a great opportunity for quality time with the kids.