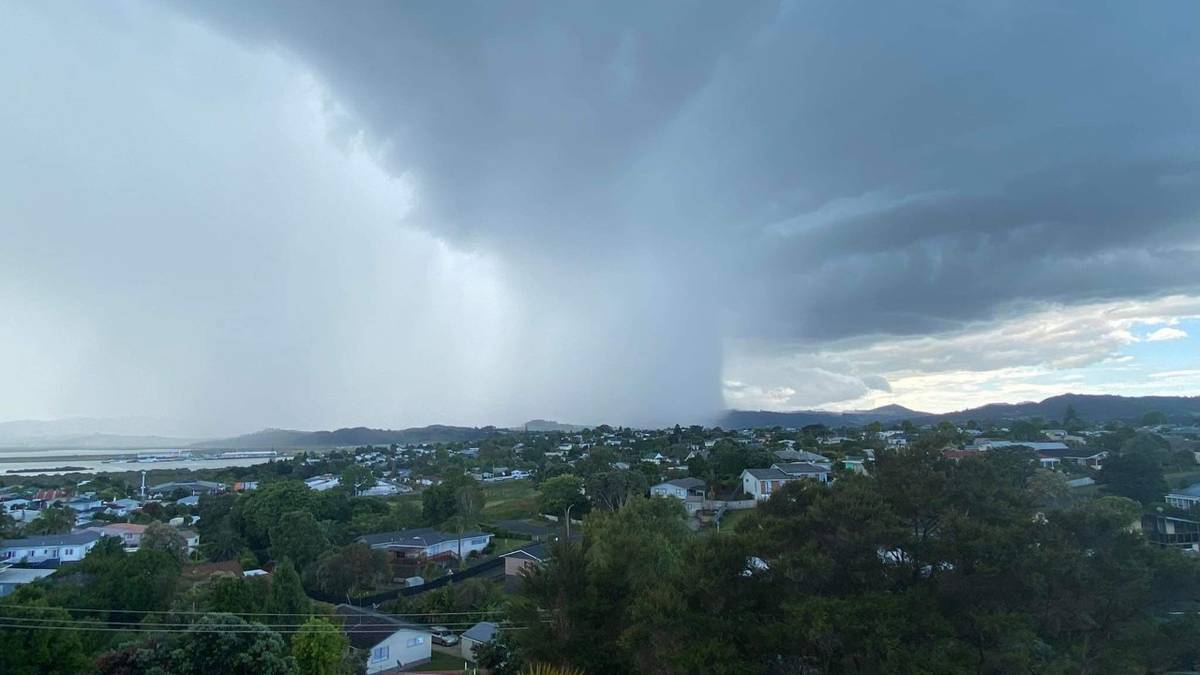 Trudy Ross sent in this photo of the downpour taken from Onerahi. Photo / Supplied

Residents in some parts of Whangārei say their homes and workplaces have flooded after a strange and short-lived bout of heavy rain and thunderstorms hit this afternoon.

A woman was in her Woodhill home when all of a sudden rain started pelting the wall 3m away from the windows it was pouring in through.

“It literally went horizontal,” she said.

The woman described a “peculiar” swirling wind that seemed to look like a tornado.

She shared a photo of the dark, grey skies online.

“It was to make sure I wasn’t going crazy and other people saw what I did.”

And those in central Whangārei did. However, many closer to the city’s outskirts – such as Kamo – missed the wild weather and continued to bask in the day’s sunshine.

“[…] the wind was sideways and I couldn’t see out the windows, incredible amount of rain, and a thunderclap right over the house. Frightening,” one Facebook user commented.

Others reported the intense downpour had partially submerged some roads in the city centre, workplaces downtown had flooded as had some homes.

One woman’s backyard was submerged in rainwater that reached the bottom of the steps to her home.

Bellam said the thunderstorm had tracked across the northwest of Whangārei, bringing with it “dramatic” rainfall.

The well-named Water St proved the most soaked, according to MetService data.

But Whangārei Airport recorded 10mm of rain and the nearby fire station 12.6mm.

The wind around the airport kicked up to around 33km/h but Bellam said that speed was “nothing major”.

However, the temperature dipped by 7C. Taking the city from a warm 25C down to 19C during the sudden bout of stormy weather.

The temperature has since recovered to a balmy 22C.

“That is the nature of the heavy, sudden thunderstorm or showers,” Bellam said.

MetService reported the cause of today’s weather was a very weak and shallow trough of low pressure that has covered northern and central New Zealand today.

“These thunderstorms will be isolated and produce localised heavy rain of 10-25mm/h (or possibly a little more) and hail of 5-15mm diameter. There is also a low risk of one or two very small and localised tornadoes or funnel clouds about the central North Island.”

MetService has forecast a shallow trough of low pressure that will cover northern and central New Zealand on Tuesday morning, with the atmosphere becoming increasingly unstable as temperatures cool aloft.

There is a broad low risk of thunderstorms covering most of the North Island.