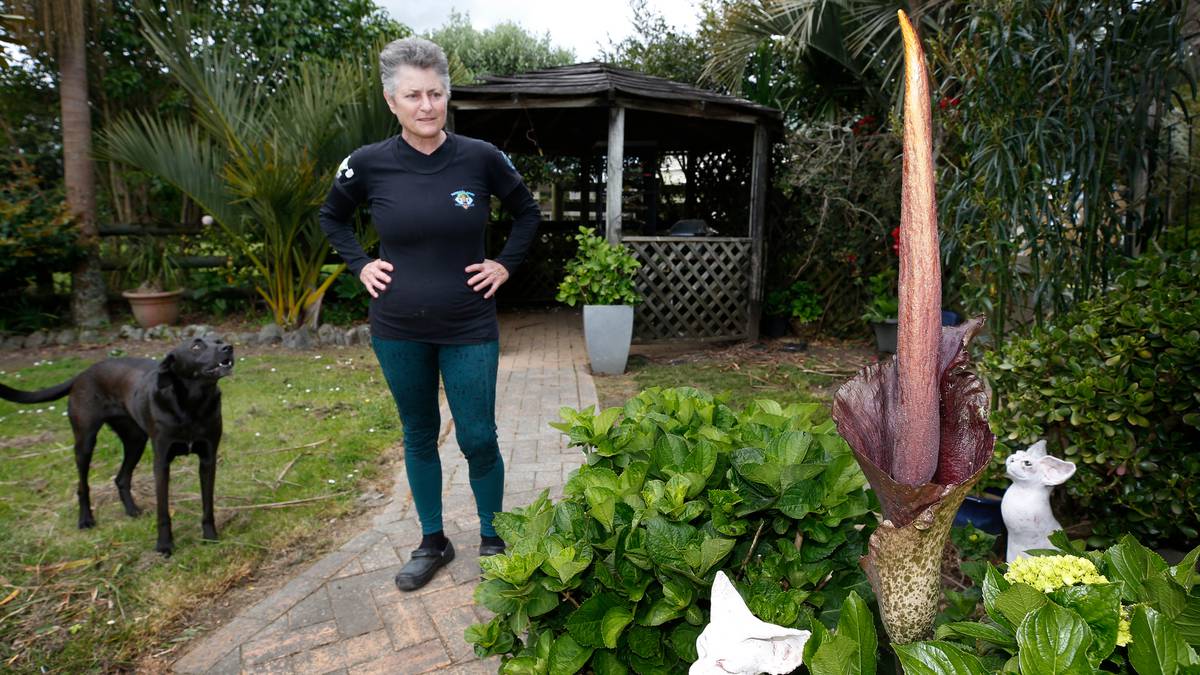 Maggie Lindsay and her dogs Ralph and Tui stand back a safe distance from the stinky plant. Photo / Michael Cunningham

After growing for 15 years, a Whangārei woman’s plant has finally flowered – and it stinks.

Owner Maggie Lindsay said the plant – which she believes is a Konjac plant – suddenly grew two feet in just two days last week, and then it bloomed.

“This year it just came up, and I was pretty stoked. It’s probably been in the ground about 15 years.”

The plant emits a putrid odour reminiscent of rotting flesh to attract carrion beetles and flesh flies – insects which feed on dead animals or lay their eggs in rotting meat and which help the plant’s pollination process.

“Every year I’ve been waiting for it to do something. Finally.”

The plant – less generously known as the ‘corpse plant’ – takes between five and 10 years to mature. There is also considerable variation in the period between bloomings; anywhere between two and 10 years.

The plant was a surprise gift from Lindsay’s friend several years ago, who couldn’t stand the smell in her own backyard.

“She was ripping them all out of the garden because they hated the stink,” Lindsay said.

Amorphophallus konjac is the scientific name, and some also refer to it as ‘corpse flower’.

All these years later, Lindsay’s son paid a visit to finally see the plant in its full form, and his corpse-centric interests haven’t waned in the interim.

“He’s a medical scientist; he’s spent the last three years up until this week in the morgue.”

The species Lindsay has is a small breed – a giant species of the plant that attracted over 5,000 people to a Southern California botanical garden last year.

■ Konjac is a common name of the East and Southeast Asian plant Amorphophallus konjac, which has an edible corm (bulbo-tuber). It is also known as konjaku, konnyaku potato, Devil’s tongue, voodoo lily, snake palm, or elephant yam.

It is native to Yunnan in China and cultivated in warm subtropical to tropical East and Southeast Asia, from China and Japan south to Indonesia and Vietnam. It is a perennial plant, growing from a large corm up to 25cm (10in) in diameter. The single leaf is up to 1.3m (4ft) across, bipinnate, and divided into numerous leaflets.

The flowers are produced on a spathe enclosed by a dark purple spadix up to 55cm (22in) long.

The food made from the corm of this plant is widely known in English by its Japanese name, konnyaku (yam cake), being cooked and consumed primarily in Japan and Korea.

The two basic types of cake are white and black. Noodles made from konnyaku are called shirataki. The corm of the konjac is often colloquially referred to as a yam, though it is not related to tubers of the family Dioscoreaceae.