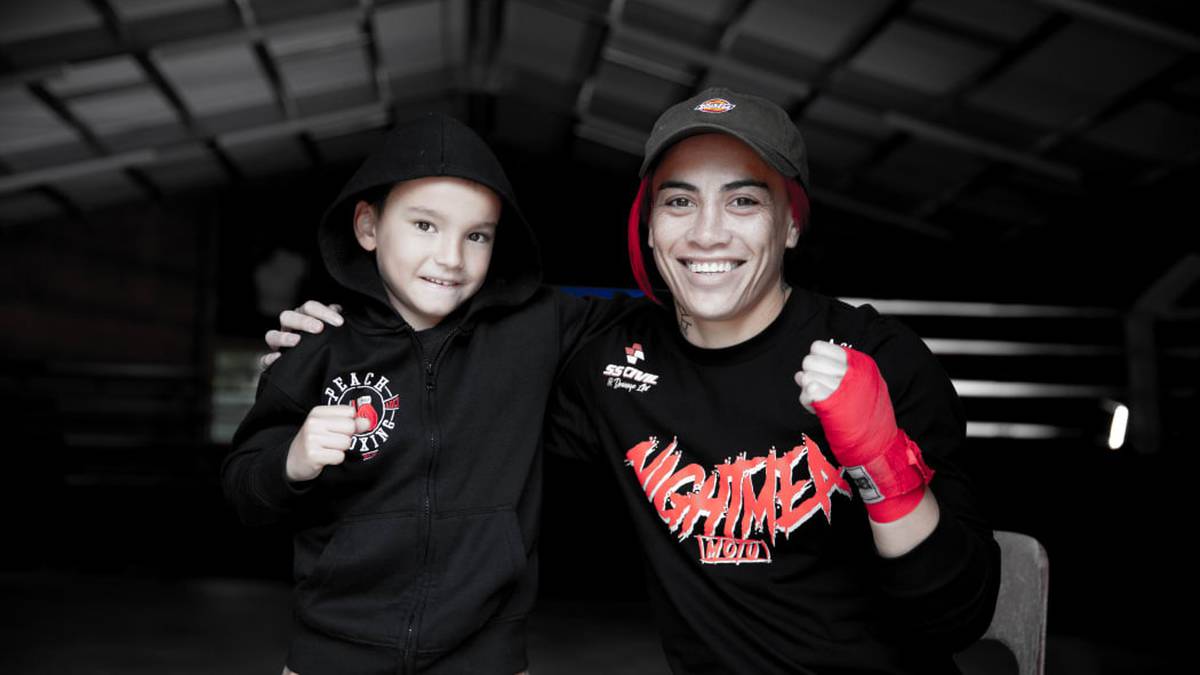 She’s conquered New Zealand boxing, and now Mea Motu is ready to take on the world. But the path to the top for this 32-year-old mother-of-five has been anything but smooth. Now, for the first time, Mea is publicly sharing the harrowing details of how she quite literally fought for her life. Reporter Clay Wilson and video journalist Marika Khabazi of RNZ have her inspiring story.

It is a resume that has Mea Motu eyeing up a world-title opportunity.

But no fight she ever has inside the ropes will come close to the battle she’s fought on the outside.

“I look at it now and it’s like, wow, I actually came out on the other side … Seriously, if you were to ask me eight years ago, I thought I was digging my own grave.”

It was a desperate situation that is hard to imagine when meeting and talking to the Motu of today.

It is also one she could never have predicted growing up in a loving and supportive family in a small community in Aotearoa’s Far North.

Motu’s eyes light up as she reflects on her childhood in Pukepoto, on the outskirts of Kataia.

“I grew up with the horses, the pigs, the land. We didn’t have shoes, we didn’t need shoes. Waking up to fresh air and just living in the nature.

“I grew up on a marae a lot. Seeing all my elders, grandparents and our culture. Singing and speaking te reo Māori was very strong.

“It was very family orientated. I thought everyone in my home town was all my cousins, all my family. They weren’t, but that’s how it was back then.”

When Mea was 10, the family moved south to Auckland.

She discovered boxing at age 13, and would soon meet her present trainer and Peach Boxing founder, Isaac Peach.

Bubbly, kind, generous and warm. These are the words Isaac uses when he recalls how Motu was back then, and remains today.

“I was always drawn to Mea.

“Me and Mea are very, I dunno, she’s rough, I’m rough. We were in a poncy kind of a gym and we were probably outsiders in that sense … so I always liked Mea.

“I was always older than Mea, so I always felt like I needed to look after Mea. And then we drifted apart.”

For Motu, life had begun to change. At 17, she met her first boyfriend and future husband. About a year later, she was pregnant.

“When I first got hit physically I was kinda shocked, like, is this meant to happen?”

From there, it only got worse.

“I could be sleeping in my bed and then I’d get woken up at three in the morning and I’d have a hammer or a bat hitting into me cos he’s either intoxicated or drugged off his face, I don’t know.

“I always thought, okay, it’s cos he’s not being himself. The drugs have overcome him, or the alcohol has consumed him, so that’s not his true feelings.

“I thought being with him when he was really good to me, that’s his natural self … he was two different people.

“I believed he could change and the only person that could help him was me, and that’s where I was trapped.”

Trapped and soon to be homeless. She began living in a car with two young children, trying to make it through each day.

“Some days I couldn’t eat, and I’d make sure the kids had eaten.

“I remember, I was counting my pennies, counting my little coins. I had six dollars exactly and I just remember getting bread, drink and hot chips and that was enough.

“It was pretty hard. It was stressful. I look back at it and I’m like, what the heck was I thinking, but I was so caught up in love.”

Eventually, though, Motu knew she had to get out. But wanting that and doing it – given her partner’s gang affiliation – were two very different things.

Motu said even moving to Australia or finding a new partner did not mean it was over for her, or her children.

“My daughter saved my life. She put her life in front of her father to stop him from stabbing me.

“And my son has put his life [on the line] for me. To save me and keep me alive, and their dad almost tried to run him over because he was trying to run me over.

It was not the only way in which her kids were her saving grace.

“The only thing that kept me alive was that I needed to stay awake for these kids.

“I so wanted to give up. Like, every time I hit the concrete floor or whatever it was, I’d be like ‘I wish I could stay here and he just beats me to death and I don’t have to ever wake up’.

“But then there’s that little inch of me [that was] like, ‘Who’s going to look after my kids?’.”

The situation eased when Motu’s partner was sent to prison, but it did not mean the ordeal was over.

It was only when she found a desire to return to boxing, that true freedom followed.

A desire that quickly led to an invite from Peach, who had set up a gym at his house in west Auckland.

“One day she just turned up, simple as that,” he said.

“She turned up with her two babies, knocked on the door and said: ‘I’m ready to train’.

“She had a four-month-old and a one-year-old. She walked in and my wife was like ‘who the hell’s this’? I was like ‘Mea come in, do you want some dinner’?”

As it turned out, it was a pivotal moment that nearly did not happen.

Motu said after she pulled up in Peach’s driveway, she was flooded by second thoughts.

But, with a bit of urging from her new partner, they were thoughts she was now grateful she overcame.

Having seen Motu’s skills as an amateur boxer, though, Peach knew she was capable of much more than that.

Anyone who would listen was told “this girl is going to be the next world champion”.

That immediate – and to this day unwavering – belief created a mutual trust, although with everything Motu had been through, it took time before she truly opened up.

“When she started with me her barriers were up, in the sense that she was extremely tough about everything,” Peach said.

“Over the last two years, now she’s a big sook, she’s soft as. But she was hard as hell and that was her way of protecting herself.

“[Now] she’s just Mea. She doesn’t need to be tough any more and she can let the guard down.”

It was a healing process that, along with Motu’s coach and teammates, Peach’s wife Alina has played a key role in.

Alina not only runs Motu’s strength and conditioning, she now helps with her boxing training, all of it bringing the pair even closer together.

“Oh, she gave me a whole other power,” Motu said of Alina.

“She just put the icing on top of the cake … I built a bond with her that … I don’t open to random people, but I felt comfortable opening up to her.”

Alina remembers the day Motu did just that, revealing the harrowing details of her eight-to-10-year ordeal.

Having heard how low things got, Alina said those hard times were clear in Motu’s qualities as a boxer.

“I think she can almost block out the physical pain, probably from her trauma. She can actually switch off from that and she can push really hard and nothing is going to physically hurt her in that gym or in the ring, which is one benefit of what she’s been through.”

A benefit that has helped Motu to that 13-0 pro record, in the space of just two years.

A record they believe should have her in the mix for a world title shot in the not-too-distant future.

But regardless of what happens, or will happen, in boxing, Isaac says Motu’s journey was about much more than the sport itself.

“It’s not boxing. Boxing comes, boxing goes. Boxing’s going to be gone. Might be gone for her in three years, might be gone in eight years.

“It’s that she knows she’s worth something. She can be something, she can do whatever the hell she wants, man.”

Right now what Motu wants is to share her story – a story Alina believes can make a real difference.

“Especially in New Zealand, with our gang culture and domestic violence, it’s so important other women hear her story and know that if you are or have been in that situation, that’s not the end of the road for you.

“If you can get out of it then that doesn’t define you. Look what she’s now done with her life.

“That’s not saying everybody has to go and become world champion or do amazing things that make headlines, but just to be able to survive that and live a normal happy life is such an amazing thing.”

Once simply surviving, Motu is now thriving and she sees exactly how powerful that can be.

“I want to help others. If there’s someone that’s stuck in my position, I wish they could hear me right now.

“Don’t give up. Keep fighting for your life.”

Because if you do, she says, you just never know what might be possible.

“What would it mean to win a world title? I fought for my life and my happiness, that’s what it would mean.

“I overcame that darkness and I came to the light.”

A light shining brightly for this mother of five, who has already won the fight of her life.

Where to get help

If it is an emergency and you feel like you or someone else is at risk, call 111.