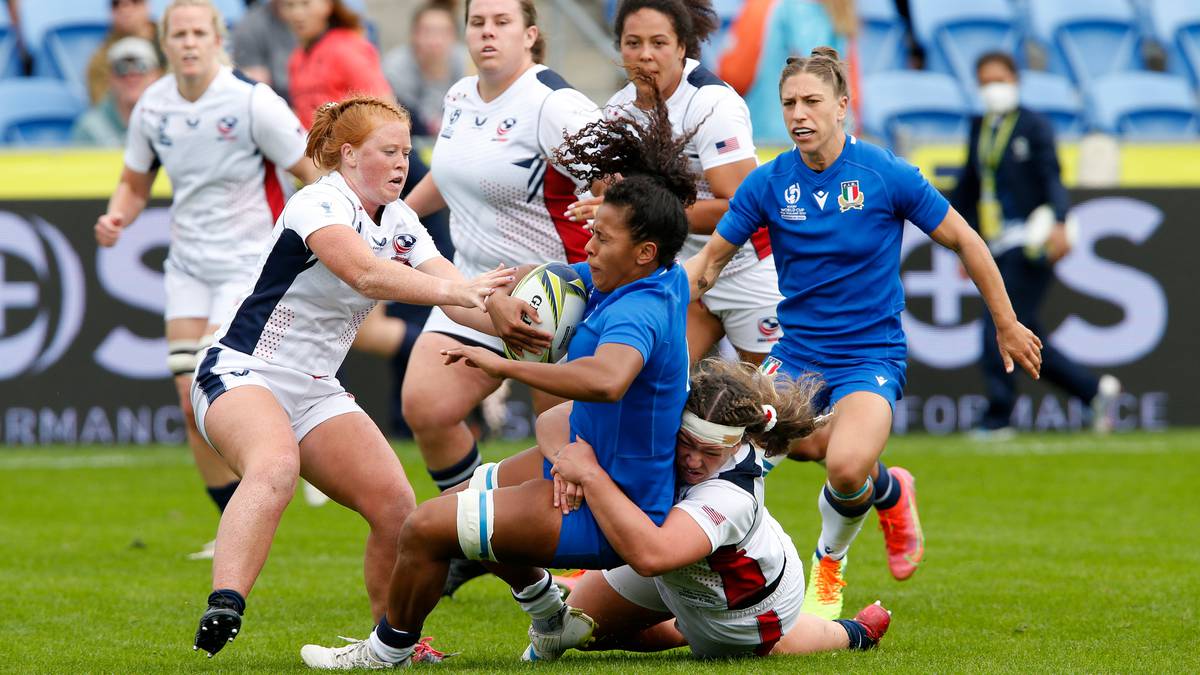 More razzle-dazzle rugby at the Women’s Rugby World Cup is in store for Northlanders, if the opening triple-header is anything to go by.

At Northland Events Centre in Whangārei, the grandstand and terrace seating did not sell out for the opening three games yesterday, despite Ladi6 also performing between two matches on what was a patchy day.

However, those that turned up enjoyed a feast of rugby, and the calibre of players, their skill level, and the tempo of the games all made for an exciting opening day.

The Italian side leave Whangārei for Auckland today with their tails up after overpowering USA 22-10 in the opening game. Italy will play their remaining two pool games in Auckland.

Led strongly by their skipper Elisa Giordano, the Azzurre picked up the tempo of the game towards the end of the first half and rattled the Americans for most of the second spell, which resulted in four well-worked tries.

While the USA managed to get on to the scoreboard in just the third minute through lock Hallie Taufoou, they couldn’t exert enough pressure off set piece play for large parts of the game and nab more points.

Their ball-carriers bashed and crashed up the middle, but began to tire out somewhat as the game wore on, and the Italians did not need a second invitation to up the ante.

Their fourth try was a delight to watch. It came off a lineout move – wing Maria Magatti received an inside ball from No. 10 Veronica Madia, and the former made a scything run down the midfield channel and around the USA’s defence to score.

“[The win] was amazing because it boosted the belief in our capabilities. We need to keep getting better,” Giordano said.

She said her players opted to utilise space rather than crash and bash upfront against a physically stronger USA pack, and they got the results.

USA captain Kate Zackary was proud of the first 20 minutes, which was the plan going into the game.

“We set the intentions of the first 20 minutes to come out guns blazing, basically – for lack of a better term – and I think we met that intention, but we just have to figure out what the standard is for the remaining 60.”

“But [I’m] really proud as well of the set piece; we demolished the scrum a couple of times. We’ve been on the other end of it, so we know how it feels. Our forwards did a lot of work, from set piece to open field – they had a lot of line breaks, they created a lot of opportunities on the edges.”

Zackary said her team needed to just dig a little bit deeper and fine-tune their lineout a bit, because they knew they could play well through a full 80-minute game.

Neighbours Canada had no such heartbreak, convincingly beating Japan 41-5 in the second match.

Canada’s rolling maul is such a lethal weapon, and they scored three tries off that in the first half.

Hooker Emily Tuttosi and halfback Brianne Miller bagged a brace each, while wing Paige Farries scored the first try after pouncing on a charge-down in the opening minute.

Japan struggled to build decent phases in drizzly conditions and the Canadians chose to play a territorial game, knowing there was a high chance their opposition would make mistakes in their own half.

The last game was Wales and Scotland.