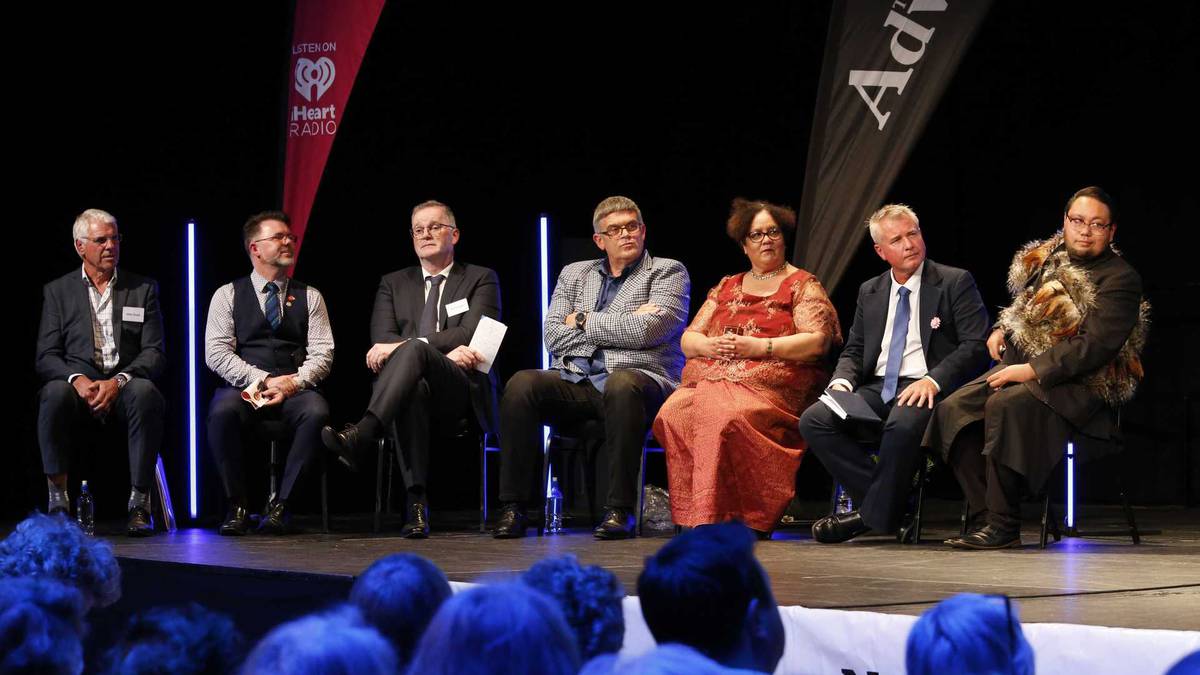 Five hundred people attended Forum North’s exhibition hall last night to hear the six men and one woman speak at the event organised by the Northern Advocate and the Hits radio station.

Candidates said they were against government proposals to take $1.5 billion of Whangārei District Council (WDC) Three Waters assets and put them into a giant top-of-New Zealand water services entity currently known as entity A, along with infrastructure from Far North District Council, Kaipara District Council and Auckland Council.

Cocurullo and Jacob adamantly said no to Three Waters.

Cocurullo said WDC’s $1.5 billion of Three Waters assets belonged to the ratepayers of the district. The council managed these assets on behalf of the community.

“In my view, it’s [Three Waters] creating a division among people,” Cocurullo said.

Others, such as Couper, were less definite, saying the government had recognised there was a problem with wastewater, stormwater and drinking water infrastructure that needed to be fixed, but it had been too quick in trying to bring this fix in within just three years.

Couper said a solution was needed for Northland as sewage was running into the region’s harbours, where wastewater treatment plants were not meeting required resource consent standards.

He said Whangārei ratepayers would be subsidising Three Waters costs for the Far North and Kaipara if the region’s three district councils operated into the future without Auckland Council as part of the new picture.

Shortland, 28, said he was 99 per cent against Three Waters.

He said the 1 per cent he was more in favour of was the co-governance that featured with Three Waters. Whangārei’s crest included his ancestor Pohe and Anglican Reverend Samuel Marsden. Both worked together to solve challenges.

Shortland said he did not trust the government to adequately protect assets such as Three Waters, which could be better managed locally through co-governance, he said.

Budd said 75 per cent of WDC’s asset value was tied up in Three Waters. Removing these assets from the council balance sheet reduced its ability to borrow against them to fund development.

Flower said solving Three Waters restructuring was not simply about changing the government at next year’s election. No new government came in and overturned the previous government’s developments such as Three Waters. It would be a case of the new government tweaking what was already in place and then selling it.

Green said Whangārei should “blinking well not” be handing over its Three Waters assets.

Mayoral candidates also outlined what they would do in their first 100 days in office.

They were asked whether they were in favour of co-governance, which prompted a range of answers for and against. Candidates also outlined how they would address worsening central city crime so businesses could feel safe.

On other topics, Shortland said better communication about what the council was doing was needed.

Get more local election news with Georgina Campbell every Tuesday with our politics podcast, On the Tiles – Local Edition

Shortland said he would appoint a town crier to spread the news if he became mayor, or would become one himself if elected as a councillor.

Shortland’s waiata, speaking of the importance of all people working together, held the audience spellbound.

Dealing with the major ramifications of climate change for the district and region got a small mention from the candidates, but did not feature prominently overall.