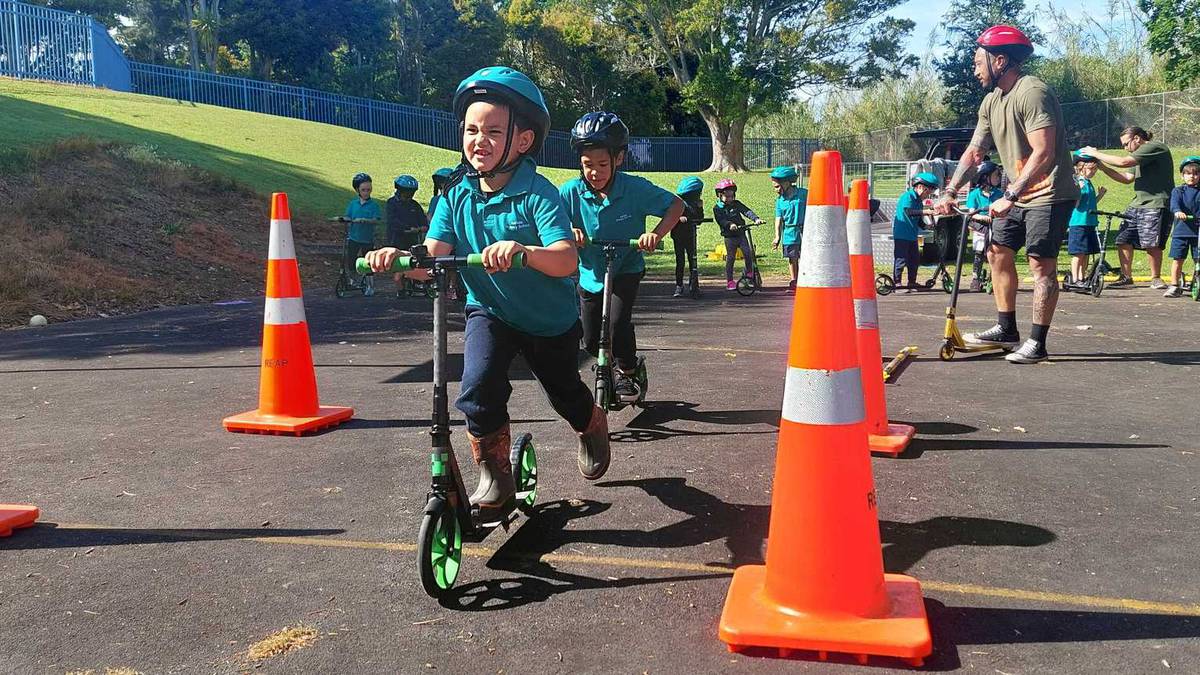 Students were also taught the importance of scooter safety and understanding stop and go while riding to school. Photo / Myjanne Jensen

A Far North primary school is using the “fear of missing out” (FOMO) to help get kids back to school this term.

Kaitaia Primary School held its first Rock Up fun day on Tuesday in an effort to encourage tamariki (children) and their whānau (families) to pick up attendance after the school holiday.

The all-day event included a range of activities based on the kaupapa (concept) of the term four theme, Keeping Ourselves Safe, in conjunction with outdoor education and learning.

The team from Rock Up brought their giant outdoor rock climbing wall, as well as other fun obstacle challenges for the tamariki.

Principal Brendon Morrissey said historically, the first two weeks of term four had always been a bit low in attendance, with only 50-75 per cent of students turning up for class.

Morrissey said he’d taken the approach of using FOMO to ensure children didn’t want to be anywhere else but at school during the week.

“Having something exciting early on in the term, we’re hoping it will bring those percentages up quicker and we have noticed there are more students this time around,” Morrissey said.

“We’re also looking at putting more activities on a Friday, which is our worst attendance day.

“We’d love for this type of event to be a yearly thing, but it all just depends on funding from the ministry.”

Morrissey explained the ministry had sent out extra money to all schools to help them with improving attendance.

The Tai Tokerau Principals’ Association released a statement back in August announcing its intention to encourage more students in Northland to get to school and to send the message that “school was safe and important for the future of our tamariki”.

TPPA chairman Pat Newman said schools had built some “really good relationships” with the ministry, and the campaign was one example of what could be achieved when you “work together”.

“We’re not saying this is the magic solution, but at least we’re not sitting on our backsides doing nothing,” he said.

As part of the campaign, schools around Northland have been provided a social media kit containing graphics and messaging in both te reo Māori and English that can be used on a range of platforms including Facebook, websites, and newsletters.

The campaign name, slogan “For the future of our tamariki”, and key messaging were informed by students from Kamo Primary School, Hora Hora Primary School, Tikipunga High School, and Taipa Area School.

Ministry of Education attendance data shows Northland has had one of the highest chronic absence rates – students attending school 70 per cent or less – since 2011.

But principals say dealing with attendance has become more difficult to address post-Covid.

Newman said it was hoped the Let’s Get to School campaign would spread a unified message that schools cared about their students and were keen to work with whānau to get their tamariki back, for their future.