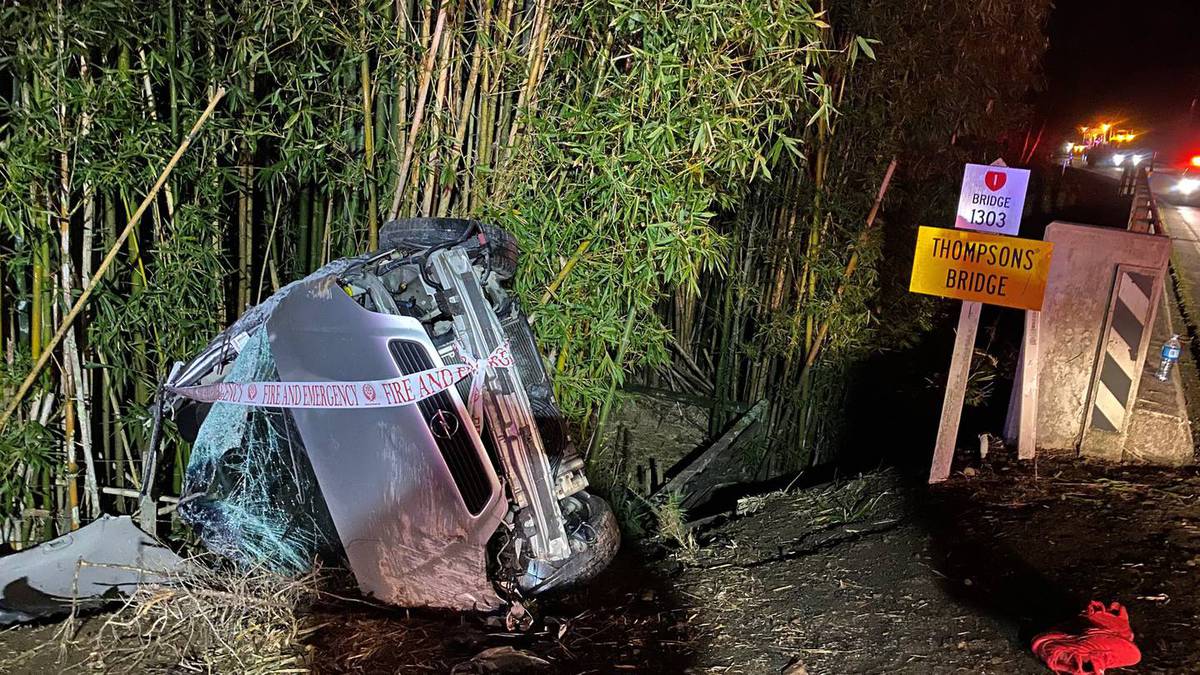 Five people were in this car when it rolled and just missed a bridge abutment on SH1 south of Kaitāia, last year. A man, who later died, was thrown from the vehicle.

Well, it had to happen. For months now we have been dodging bullets, getting double vaccinated, then double boosted and watching friends, relatives and colleagues going into isolation. Then late last week, we got it – a positive test.

So this column, the last of the year, is being written in a Covid-induced fug that lifts and descends with the day. We have no great debilitating health symptoms but the system surrounding the Covid response really does work. We’ve had offers of help from family and friends, our doctor and the health system, such that we really feel supported as this system wraps itself around us in isolation.

This column though, heading into the holiday driving season, is about a different type of wrapping-around, that which is provided by our seatbelts. Non-wearing of available restraints is the cause of almost 40 per cent of our car fatalities in Northland. Last year nine out of 24 car fatalities or 37.5 per cent were not restrained and this year, so far, it is 9 out of 23 – that’s 39 per cent and remarkably consistent.

For Northland, there may be multiple factors that cause crashes. Alcohol, drugs, distraction, speed, crossing the centre line, maybe even lousy roads – but for almost 40 per cent of our fatalities, it was the failure to wear a seatbelt that meant that nine Northland people will never spend Christmas with their families again.

But it is not just those families that are affected. The first responders who had to pick the 6-month-old unrestrained baby off the road will also continue to live with that horror. It is time we started to talk about seatbelt-wearing, and for our politicians to act on it.

A family we know of had a recent holiday to Australia. They hired a rental car and enjoyed the attractions of the Gold Coast. Two weeks back home, the rental car company sends a photograph and a fine of $1078.

It seems the teenager sitting in the front seat had his seatbelt tucked under his arm rather than over his shoulder and was snapped by an overhead camera. The $1078 fine will take a hefty chunk out of his holiday pay packets and he won’t err about seatbelt-wearing again.

The Aussies certainly know how to make drivers aware of their obligations and the consequences of their indiscretions. For not wearing a seatbelt or incorrectly wearing one, there’s that $1078 fine – but also four demerit points. A recent post on an Australian website also indicated that, if you are snapped driving a business vehicle that can’t incur demerits, the fine for the driver increases five times to a whopping $5390.

In Australia, incurring 12 demerit points within a 12-month period qualifies you for a three-month licence suspension. New Zealand drivers and passengers caught not wearing a seatbelt incur a $150 fine with no demerits. The euphemistic slap on the wrist with a wet bus ticket.

The Australians are much more serious about catching and punishing non-seatbelt wearers and cellphone-using drivers than we are. Cameras to detect these have been rolled out and installed across most Australian states since 2019. There may be some questions about privacy while driving a car, but really this is about breaking the law.

In May this year, Waka Kotahi NZ Transport Agency commenced a six-month trial, using two cameras on three sites in Auckland, to detect instances of drivers using cellphones as well as not wearing seatbelts.

The trial concluded late last month by which stage these two cameras had snapped 200,000 cellphone-using drivers and 42,500 not wearing seatbelts. These numbers were increasing month by month during the trial and indicate the significant problem we have. No driver was notified and all images have been wiped.

We obviously have a problem and we know what works elsewhere, so why would you not get serious about fixing it?

The thing with the Australian experience, confirmed by this trial, is that the technology catches the bad drivers then significantly punishes them, and hopefully the roads are safer as a result.

It’s the summer holiday season. Buckle up and enjoy your safe and careful driving in the winterless North.