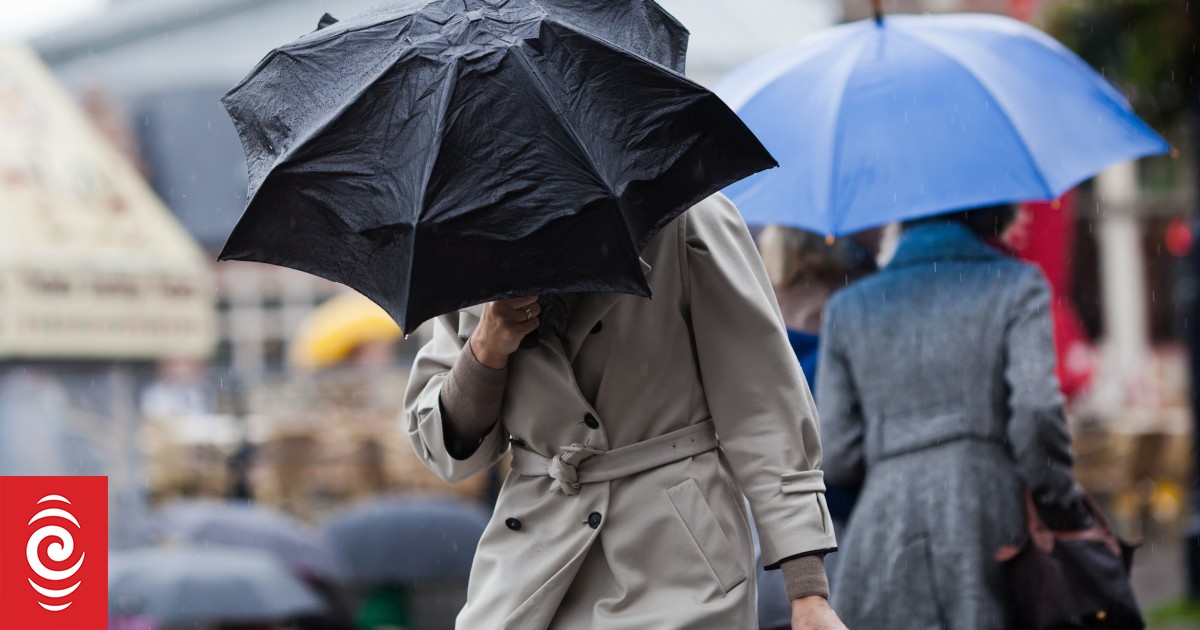 Heavy rain and gales have battered Northland overnight and Auckland is bearing the brunt of the summer storm this morning.

MetService duty forecaster Jessie Owen told Summer Report warnings and watches were in place for much of the northwestern regions of the North Island and top of the South Island.

The heavy rain warning for Northland is in place until tomorrow morning, with expectations of 110 to 160mm of rain accumulating, mainly in the north and east.

MetService said the eastern hills may see accumulations of 200 to 250mm but peak rates of 20 to 30mm per hour were expected from Wednesday night.

Northland has so far seen rain accumulation of 40 to 50mm overnight, and MetService said more was on the way.

“We have a low pressure system sitting out to the northwest of the country and that’s directing a strong northeasterly flow across the top of the North Island at the moment and that’s going to be moving slowly across the country,” Owen said.

“Unfortunately, we’ve got a big high-pressure system sitting out the east, and that’s preventing it from making much progress, so it’s going to be sitting over us for a couple of days and that’s going to be bringing strong northeasterly winds and heavy rain to many parts of the country.”

In Northland, hundred have reportedly left campsites after hearing about the incoming bad weather.

Bland Bay campground manager Wayne Johnstone said he had a huge hit to his books as holidaymakers cancelled.

Just 45 people were left on his site, and most people who had booked for this week and next had cancelled, Johnstone said.

This year was already shaping up to be a bad one financially, he said.

“Usually we would have around 300 to 350 people here with us but the weather has put an end to that. So approximately two days ago, they started leaving in anticpation that the weather was going to turn bad.”

On the other hand, his site had not seen flooding yet.

“A lot of our sites are a bit damp. We’ve had a lot of people leave. We must have had about 35 to 30 groups leave, we have 85 sites there so we’ve got a half-empty [campsite], it was fully booked.

MetService asked travellers to stay up to date with forecasts.

A heavy rain watch is in place for Auckland including Great Barrier Island, Coromandel Peninsula, Bay Of Plenty west of Matatā, and Tasman northwest of Motueka.

A strong wind watch is in force for Northland, Auckland including Great Barrier Island, Waikato, Coromandel and western Bay of Plenty to Taranaki and Taihape.

Yesterday, a few planes had to turn around from Wellington Aiport due to changing wind directions near the runway, Owen said.

Matakana’s Summer Haze concert, due to start on Wednesday, was cancelled due to the stormy weather forecast.

Wind and waves are increasing at our east-facing camera at Bream Bay in Northland. ️

The upper North Island will continue to see strengthening easterlies over the next 24-36 hours with heavy rain on Wednesday. ☔ pic.twitter.com/WW7ZxoxgKD