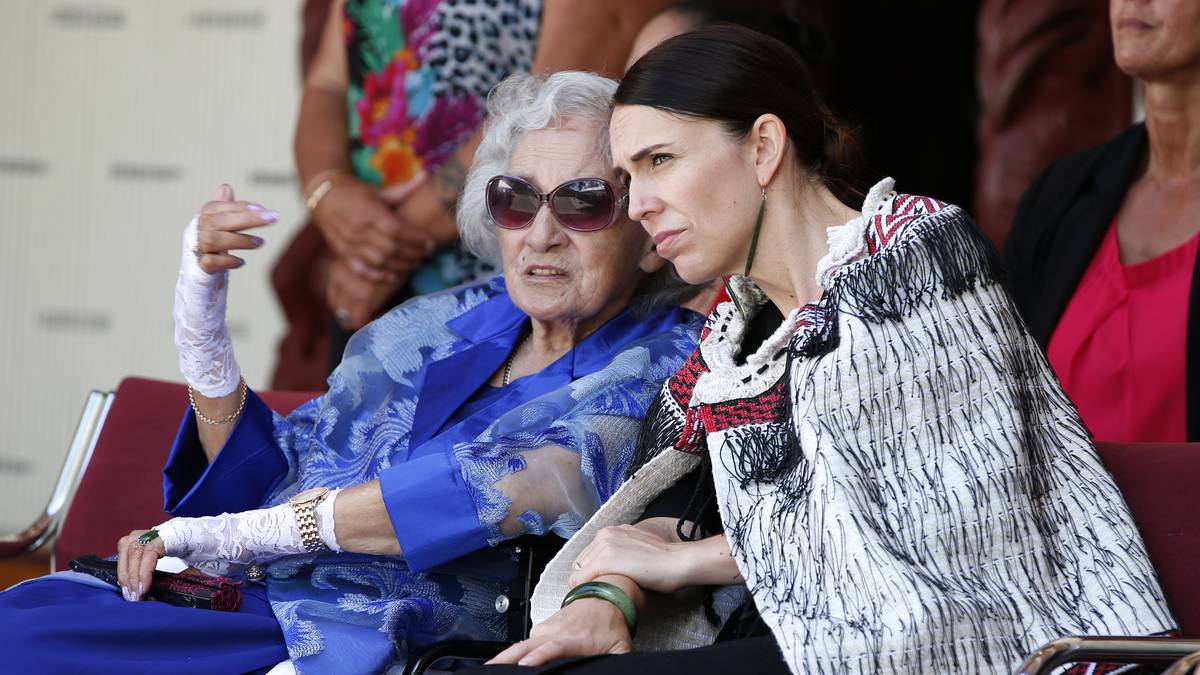 Ngapuhi matriarch Titewhai Harawira and Prime Minister Jacinda Ardern listen to the speeches from the porch of Te Whare Rūnanga at the Treaty Grounds in 2020. Photo / Michael Cunningham

Titewhai Harawira, Ngāpuhi’s best-known matriarch and a lifelong activist for Māori rights, has died at her home in Auckland, aged 90.

Her absence will be keenly felt at the upcoming Waitangi Day commemorations, where for decades she accompanied prime ministers on to Te Tii Marae, and more recently on to the Treaty Grounds, during the formal welcome for members of the government.

The proud head of a large and close-knit family, she was heavily involved in Māori activism with strong convictions backed by a steely will.

Her son, former Te Tai Tokerau MP Hone Harawira, said she lay at her home in Avondale on Tuesday night before going to Hoani Waititi Marae on Wednesday in Henderson to lie in state.

She would return to Northland for burial.

Titewhai Te Hoia Hinewhare was born in 1932 in the farming area of Whakapara, north of Whangārei, and was raised by her maternal grandparents.

After training as a nurse, she married John Harawira in 1952, settling in the Auckland suburb of Avondale. They had eight children and adopted another three.

The couple were active in local schools and founding members of the pioneering Hoani Waititi urban marae in West Auckland.

Harawira was also active in the Māori Women’s Welfare League, especially its campaign to improve Māori housing. John Harawira died in 1977 and she brought up their extended family on her own.

She became a member of the protest group Ngā Tamatoa in the early 1970s and campaigned hard, often against bitter criticism, for the Māori language.

“We were determined to rescue our language because we felt and we believed, and we believe today, that a people without its language is a people that die,” she said in 2009.

Harawira was one of the leaders of the 1975 land hīkoi that marched from Te Hapua in the Far North to Parliament.

Seeing the alienation of Māori land during World War II sowed the seeds of her dedication to land rights.

“I saw the farms that belonged to my aunties and my cousins, and people in and around our districts, being taken over by Māori Affairs and given out to other people, so that when our people came back from the Second World War those farms were padlocked, and they were locked off those farms.”

In later years, she was best known to the wider public for her annual role at Waitangi.

Harawira said she was demanding equality for Māori women who did not have speaking rights.

In 2000, some elders tried to stop her and her companions entering the marae because of the disruptions they caused, but the protest group eventually won the day.

Ngāti Whatua chairwoman Dame Naida Glavish said Harawira was often labelled a protester, but those who walked with her saw her as a protector of civil rights in New Zealand.

“She did it with such dignity even though she didn’t bow to any pressure from anyone, government or otherwise. She was staunch and true to her cause. She was very proud to be Māori.”

“She was sitting up the front and speaking. I had no inkling she would pass away less than two weeks later,” he said.

“Everyone is going to miss her dearly, for different reasons. We here in Tai Tokerau see her as a real matriarch, the champion of Te Tiriti o Waitangi and He Whakaputanga (the Declaration of Independence) and the rights and freedoms of the hapū of the North.”

“Titewhai was an absolute blunt instrument when she needed to be. She brought about accountability from people at all levels, including prime ministers. She was not a personality to be ignored. When she spoke everyone listened.”

Tipene also regarded Harawira as a paradox — she was highly critical of government institutions, yet would lead prime ministers by the hand onto the marae.

“In fact, woe betide anyone who had a go at the prime minister while Titewhai was around. She made sure everyone was looked after. She differentiated between politics and people.”

Tipene said Harawira’s legacy would “live long and resonate” through her own whānau, as it had for leaders of the past.

Tipene, who is also chairman of the Waitangi National Trust, said the organisation was still grappling with the effects on the upcoming Waitangi Day festivities.

“The flag is at half mast. We are talking with (local hapū) Ngāti Rahiri and Ngāti Kawa about what we can do to honour Titewhai. In the meantime, we are allowing her whānau to grieve,” he said.

Tai Tokerau MP and Labour deputy leader Kelvin Davis said Harawira was “a formidable force for Māoridom” who fought for what she believed in, what she thought was right, and what she thought would bring progress to Ngāpuhi.

“She was a formidable opponent but also a staunch supporter of people and causes she believed in, but she had a very soft and gentle side. She was also quite proper, the sort of person that drank tea from bone china.”

Davis said Harawira was “devastated” by Prime Minister Jacinda Ardern’s resignation, and the viral attacks and misogyny she had been subjected to.

“She wasn’t just a protester but in fact became one of our most important leaders, particularly for urban Māori, and challengers to the establishment of the last 50 years.”

It was ironic she had died on Prime Minister Jacinda Ardern’s last full day in office.

“Ti (Titewhai) loved Jacinda immensely and would have been shattered with her resignation,” Jackson said.

Te Pāti Māori president John Tamihere said Harawira devoted her life, and that of her children, to advancing Māori.

Tamihere wrote the foreword of a book published to commemorate her 90th birthday last October.

In it he said Harawira’s life story followed the journey of Māori from “being trampled and placed in great difficulty to a relentless energised woman who, through her efforts and her family, changed the national discourse and narratives around Māori rights to break out of welfarism and dependency of the state and overbearing Pākehā”.

Her legacy would live on through her children and mokopuna.

“It is they who will carry on Ti’s mahi,” Tamihere said.

“She was vilified as a woman but that never got in her way of fighting for the rights of tangata whenua. Women like Titewhai give the rest of us strength to hold our own and let us be activists and let us be mothers,” Ngarewa-Packer said.

When the Māori Party was formed in 2004, Titewhai Harawira wanted to stand as a candidate for it in the general election of the following year, but it was her son Hone who entered Parliament as a Māori Party MP.

“We were chalk and cheese, but I listened to her because she had very practical and pragmatic approaches to moving forward for hapū tino rangatiratanga (sovereignty).”

Harawira had been a driving force behind the January 14 hui called to discuss the Ngāpuhi Treaty settlement and the Waitangi Tribunal’s newly released stage 2 report.

She insisted the hapū of Ngāpuhi should not relent or miss the opportunity to advance their settlement, he said.