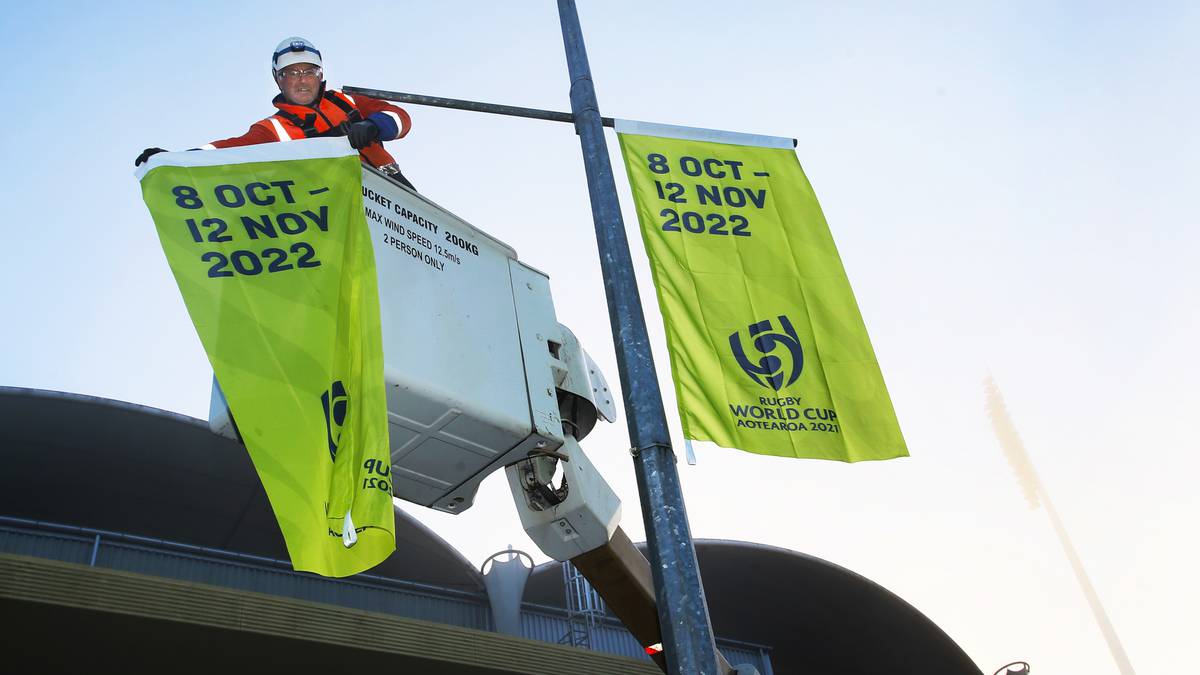 RWC2021 flags going up at the Northland Events Centre ahead of the pool games kicking off next weekend.
Photo / Tania Whyte

Teams playing their pool matches in Whangārei during the women’s Rugby World Cup will start arriving into the city from Monday and organisers are on track to meet attendance targets for all games.

Eleven of the 12 teams competing in the Cup, known as RWC2021 after its postponement due to Covid-19, will play matches at the Northland Events Centre in Whangārei.

The fixtures start next weekend, and the venue will also host two quarter-finals later this month.

Fiji, New Zealand, Australia, Canada, the United States, Japan, Italy, Scotland, England, Wales and France will play in Whangārei but there won’t be an official welcome for them in Northland.

A pōwhiri will instead be held for all 12 teams in Auckland on Monday and then the six teams that will play in Whangārei on the opening day on Sunday, October 9, will make their way up north.

Auckland is chosen as the location for the welcome event as it is the only opportunity before the tournament begins when all 12 teams will be based in the same host city, an RWC2021 spokeswoman said.

She said teams have been provided with a list of local non-match day activities to enjoy during their time in Northland in association with local tourism operators, businesses and community organisations.

“It is up to each team to incorporate these as their schedules allow. Among these opportunities are to experience a pōwhiri and to visit the Waitangi Treaty Grounds.”

More than 100 volunteers have been recruited to help out during the games in Whangārei.

The spokeswoman said volunteer uptake in Northland has been amazing, both in terms of pure application numbers, and the level of engagement and interest from those who applied.

“Lots of people mentioned that they want to show off Whangārei-Northland and are keen to take advantage of the opportunity given there are not often major international events hosted locally. Many volunteers also have previous experience from the 2011 [men’s] Rugby World Cup.”

She couldn’t give specifics on ticket sales but said there was unprecedented interested in attendance at Northland Events Centre match days.

“We have seen particularly strong interest in match day five on 22 October when the Black Ferns take on Scotland, with crowds expected to far exceed attendance targets.

“The quarter-finals on 29 October are also attracting strong ticket sales and as the tournament progresses we expect to see an uptick as fans take advantage of the opportunity to attend the last Rugby World Cup 2021 matches at Northland Events Centre.”

The USA takes on Italy in the first match in Whangārei at 12.45pm on October 9, followed by Japan and Canada, then Wales clash with Scotland in the last game.

On October 15, games at the venue includes Scotland against Australia, the USA taking on Japan and a mouth-watering clash between France and England.

The following Saturday, Australia will take on Wales and the Black Ferns play their only game in Whangārei against Scotland, while the Fiji-France match is also expected to draw a strong crowd to watch the Pacific Islanders.

Tickets are just $10 for adults and $5 for children and can be bought online at tickets2021.rugbyworldcup.com.

RWC2021 staff will be making a number of visits to Northland host venues before kickoff.