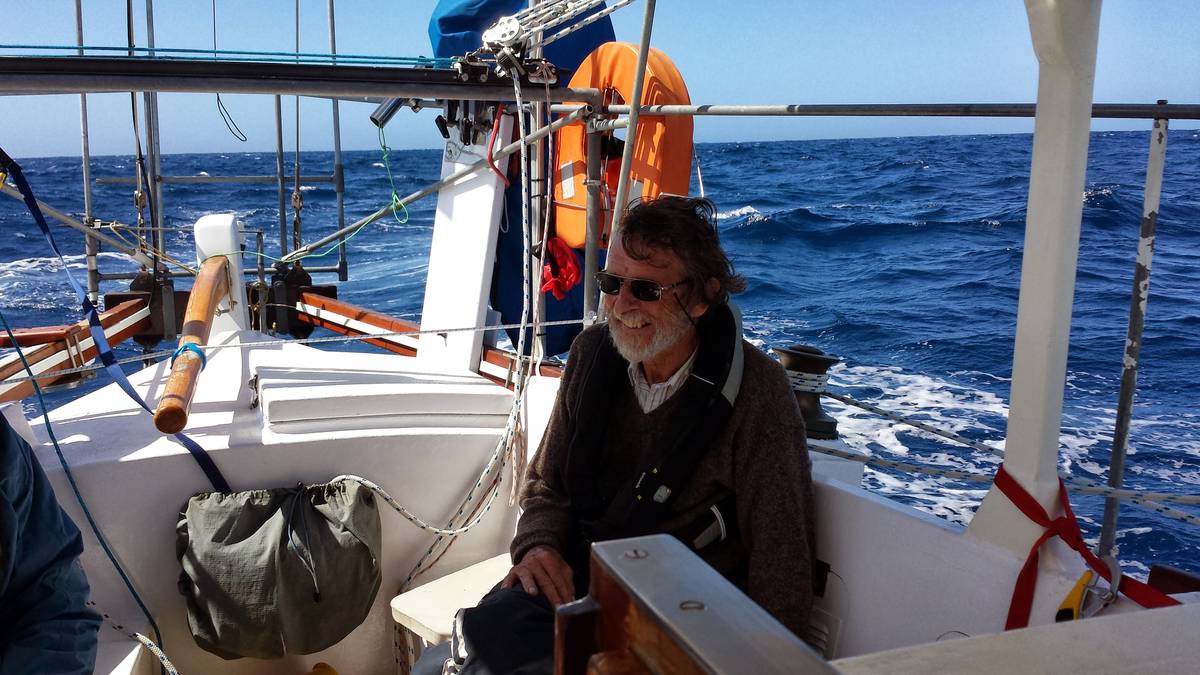 Howard Harris at the helm of Wind Wand on a return trip from Fiji in 2013.

But that iconic persona of the 77-year-old, killed after his car left the road at a notorious blackspot on Whangārei Heads Rd last week, is only one part of what made Harris so great, his adult children say.

“He did a lot of things, a lot of different jobs,” Nick Harris, the youngest of his three children said.

One of the most notable was Harris’ self-driven role as editor and reporter of magazine, Wide Wheels, created in May 1969 and devoted to all things cars.

“He was a motorsport enthusiast from a very young age,” son Russell Harris said.

Wide Wheels later became Driver before Harris wrapped the publication up in 1972.

“He complained quite badly about Allan Dick taking the name without even bothering to ask. Allan Dick being the editor of the new Driver magazine,” Russell joked.

The most recent prized possession of Harris’ – an avid Northland Vintage Car Club member – was his vibrant yellow Toyota MR2.

He had been excited by his yellow pride and joy being officially approved as a vintage car.

Before Driver was Heritage magazine, dedicated to Harris’ other love – folk music. Of which he was getting back into, said friend and neighbour of more than 50 years, Steve Nielsen.

Harris’ go-tos were the guitar and saxophone.

“But you know, saxophones don’t go with folk music all that well,” Nielsen joked.

“Nor do learner players,” Russell tacked on.

Russell said his grandmother once told him the story about when his dad first began to learn the saxophone in high school.

“His brothers and sister hated him playing it and practising and were constantly filling it up with socks.”

Harris’ extensive list of interests – which seemed to always lead to new skills and qualifications – included ham radios, boat building, IT, engineering, woodwork – he began as the audio and visual technician at what is now NorthTec | Te Pūkenga and ended up the as institute’s IT manager. He also taught science and maths at Whangārei Boys’ High School, was a mechanic, bred Angora goats, was a Sea Scout leader, plus plenty more.

“He spent 25 years building his own yacht,” Russell said.

“Depends where you put the finish line,” added Nick, who helped his dad build Wind Wand which the pair sailed to Fiji in 2013 with Harris’ wife Cathy and friend Mario.

“It was launched at about 20 years but the project carried on after that. It never finished,” he laughed.

Image 1 of 9: Howard Harris and second wife Cathy working on Wind Wand in 2002.

Daughter Julia said Harris had taught himself woodwork in his 30s – minus a stint in form two at intermediate school.

He built himself an impressive hutch dresser out of recycled timber as well as several more destined for sale.

He thought the dressers may have been an excuse to gather machinery to build the yacht – a long-held ambition.

Julia said he had been inspired by yachties Nielsen and Geri, who had been building their own boat when the trio met as neighbours in Wellington.

All the kids agreed, as did the Nielsens, that Harris had been a great storyteller with a “wicked sense of humour”.

“He was named after God, you know,” Nielsen said.

“He used to tell me that and that it was in the Bible. Our Father, who art in heaven, Howard be thy name.”

Nielsen said that was one of Harris’ favourite jokes.

The group described Harris as a family man – especially obvious when it came to his late wife, Cathy.

“She went through a long period of cancer,” Geri said. “And he was very attentive. That’s what always impressed me, he was there and willing.”

Harris completely honoured his vows, till death do us part, Nielsen said.

And since she her death, the happiest Geri had ever seen Harris was when he was surrounded by his family “fixing cars”, she said to much laughter.

Parents of Parua Bay School pupils who caught the Harris bus have thanked the late driver for the kindness and consideration he showed their kids.

A parent described how he would go the extra mile to make sure he dropped the kids off so they wouldn’t have to cross the busy road.

One time, a girl had been crying on the bus and Harris made sure to check if she was okay.

Long-time neighbour Aimee Harrison, whose daughter caught Harris’ bus, said he went out of his way to make sure the kids were safe and cared for.

He would be greatly missed, she said.

A celebration of Harris’ life will take place on Saturday at 10am at the Old Gun Club, near his Waiparera Rd home. A potluck lunch and BYO drinks will follow for those wishing to stay on.