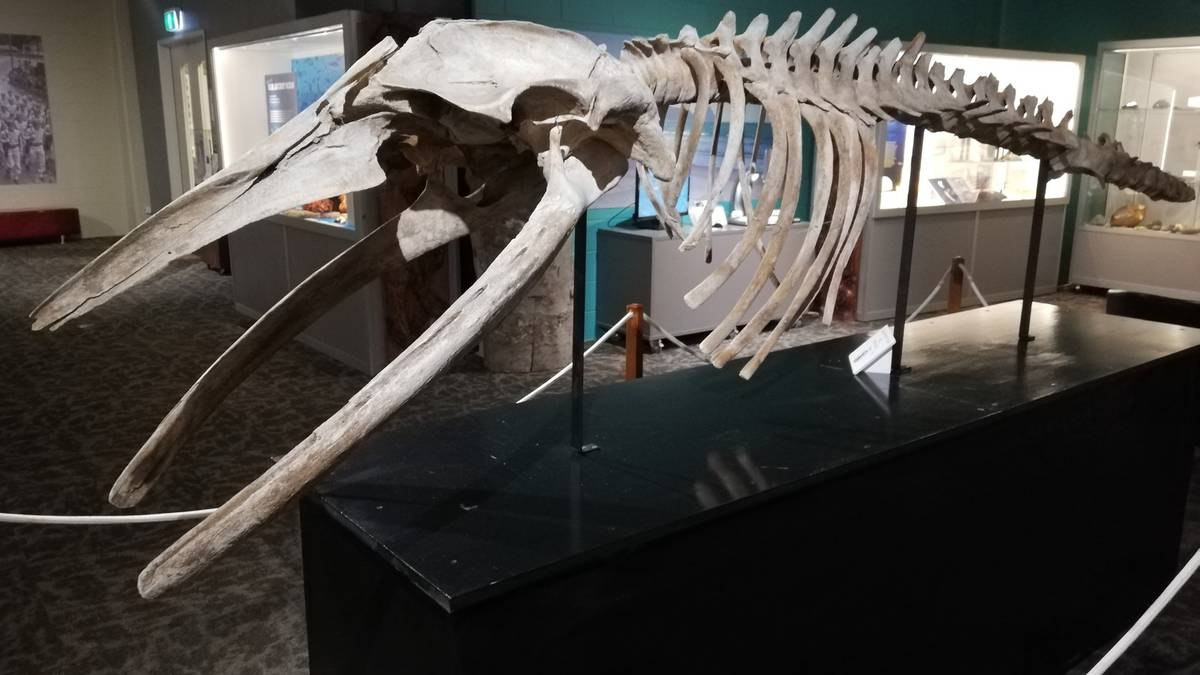 It’s easy to walk past things and not notice them. Every day at Kiwi North I walk past an almost complete skeleton of a whale, but while I saw it and knew it was there, it was only last week that I actually stopped and noticed it. I’m so pleased I did.

Minke whales are members of the baleen family which means they have baleen instead of teeth. Baleen is a filter-feeding system inside the mouths of some whales, used to sieve prey, like krill, from the water. It is made from keratin, the same protein that human fingernails and hair are made of.

This skeleton is what remains of a minke whale that was found stranded on a beach in Dargaville in 1980. It was a male, estimated to have been between 20 and 25 years old when it passed away, which is quite young as a minke whale has an estimated lifespan of 50 years.

It is not definitively known why this particular whale was found washed up on the beach, whether it was an accident or a purposeful beaching, but when a singular, live animal beaches itself it is often the result of sickness or injury. Bad weather, issues with navigation, deceptive tidal patterns, noise pollution and overfishing are also believed to contribute to the phenomenon.

When this minke whale was discovered on the beach, about 11km south of Glink’s Gully, it only had enough strength left to move one eye and it died shortly after. Its body was then buried by Ministry of Fisheries personnel behind a sand hill, away from people and out of reach of the tide.

This is where it lay for nearly five years. Not abandoned but being prepared by nature for its new purpose of educating people about his species.

In 1985 a group of men arrived at the burial site and prepared to exhume the remains of the 5.3m whale. This group included Bruce Young, director of the Northland Regional Museum; Don Young, supervising fisheries officer; Jim Rudolph, fisheries officer; Bill Ringer and Noel Hilliam, president of the Northern Wairoa Museum Society, among others.

Together the men dug deep into the sand and recovered the whale skeleton.

Decomposition was complete and the bones were clean of most organic matter. It was lifted and placed into a trailer of hay with a canvas cover and transported for processing.

Museum staff then spent the next week cleaning the remains of all root fibres and sand. Now it can be found in the museum here at Kiwi North having been reassembled with great care.

It might not have been the biggest of the whales to grace our coastline but when you really take notice of the skeleton on display, you’ll see a little whale with a unique story, preserved by nature and continuing to educate us more than four decades after joining us on land.