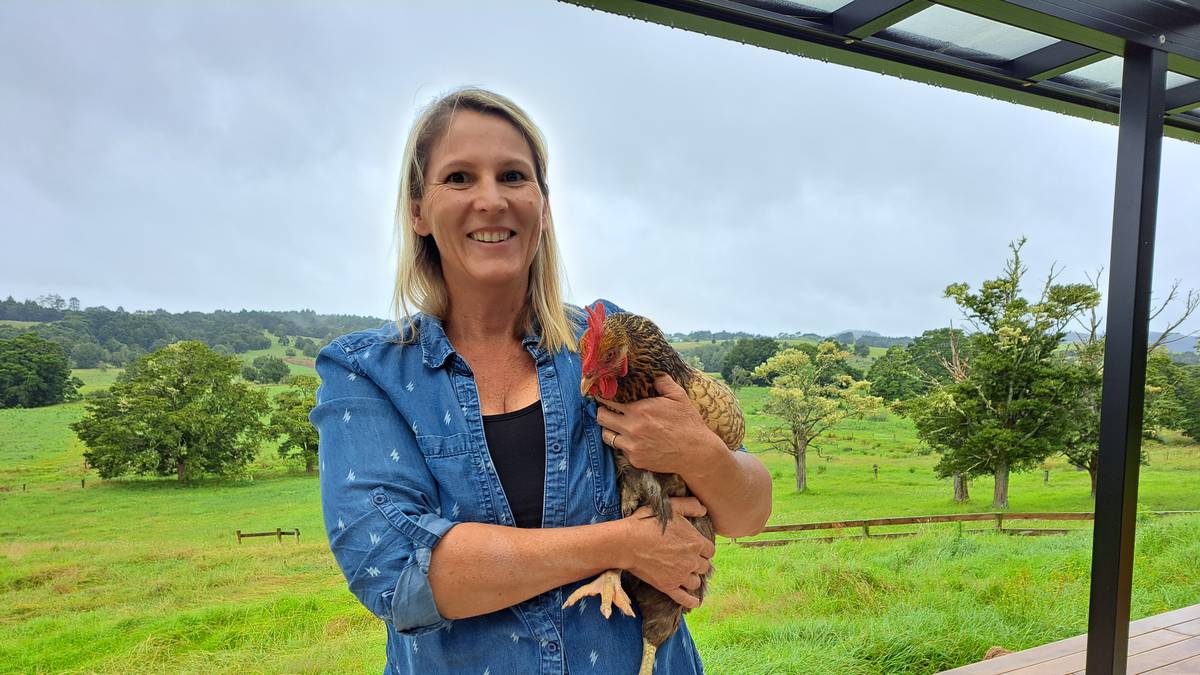 Candice Richards and Amelia Eggheart, one of her four laying hens who provide the family with four eggs a day. Photo / Jenny Ling

Northlanders thinking of getting a flock of chickens to combat the effects of the cost-of-living crisis, the rising price of eggs and a national egg shortage should think again.

That’s according to experienced chicken owner Candice Richards, who says looking after chooks properly ends up costing just as much as buying them from the supermarket.

The Kerikeri resident – who owns four heritage hens, two roosters and four guinea fowl that live in huge coop called Clickingham Palace – said with all the money she spends on chicken food and healthcare, along with time spent cleaning their coop, doesn’t equate to the handful of fresh eggs they produce each day.

“People think that having chickens is cheap and you get free eggs but that’s not the case at all,” Richards said.

“You have to feed them, give them a lot of protein when they’re malting, they need a lot more care. They need to be dewormed and checked for mites.

“It’s not a cost saving.

“It’s cheaper to buy eggs from the supermarket.”

Richards started keeping chickens four years ago and her flock quickly grew to around 50.

As a “rooky chicken keeper,” she learned how to take care of them from the internet and from a friend nearby who had chickens.

But Richards eventually found they were too much work, and ended up giving them to family and friends.

She downsized to the current four – Amelia Eggheart, Rosey, Sarah and Dianna – which produce four eggs a day.

Chickens need lots of fresh water every day, Richards said, and regular feeding. Richards uses ceramic bowls instead of plastic which tend to go slimy, and has auto feeders “otherwise sparrows and rats get in”.

Along with kitchen scraps and leafy greens, she feeds her flock Peck’n’Lay, which contains vitamins and minerals chickens need to produce eggs. It costs about $27 a bag and lasts her one week.

When you consider Richards gets four eggs a day – 28 eggs a week – and with free-range eggs now around $1 each, she is only breaking even.

The new regulations banning battery-caged hens came into place on January 1, pushing up the price of eggs and causing the current shortage.

The purpose of the legislation is to raise animal welfare standards, meaning egg producers can now only keep hens in larger colony cages, barns or free-range environments.

SPCA chief executive Gabby Clezy said people should ask themselves if they have the right environment, resources, and knowledge before getting chickens.

Along with plenty of water and quality food, the birds need a coop with a clean nesting box where they sleep, roost and lay eggs.

Chickens like to scratch, forage, and dust bathe, and outdoor areas should have shelter and protection from other animals, she said.

Because they are social birds, there should be a minimum of three chooks per flock.

“Chickens are lovely companion animals, but people need to be aware of the commitment.

“You’ve got to give them time and attention like all animals.”

Clezy said people should also be aware that some breeds lay eggs for a short period of their lives, and some slow down or stop laying during winter.

“They generally live longer than that; up to 10 years or longer, depending on the breed,” Clezy said.

“Like all animals, they have great benefits but there’s work you need to put in.”

Richards said there are many benefits of owning chickens; they eat bugs and pests and their poo can be turned into compost for the garden.

But for her, it’s mainly a labour of love.

“They work for their keep but they’re not cheap.

“I like that they give beautiful fresh eggs and I know where they’re coming from, and I know that they’re happy.”

A ban on battery-caged hens announced in 2012 came into effect at the end of last year.

The purpose of the legislation is to raise animal welfare standards, meaning egg producers can now only keep hens in larger colony cages, barns or free-range environments.

“Colony cages are a poor alternative and not one the SPCA accepts.

“They’re still in cages and don’t have room to move or exhibit natural behaviours.

“The best way to get healthy hens is to have free-range or barn-raised chickens.”

Clezy encouraged consumers to look for SPCA-certified eggs, which come from layer hens that live in comfortable, enriched environments where they are able to move around freely.