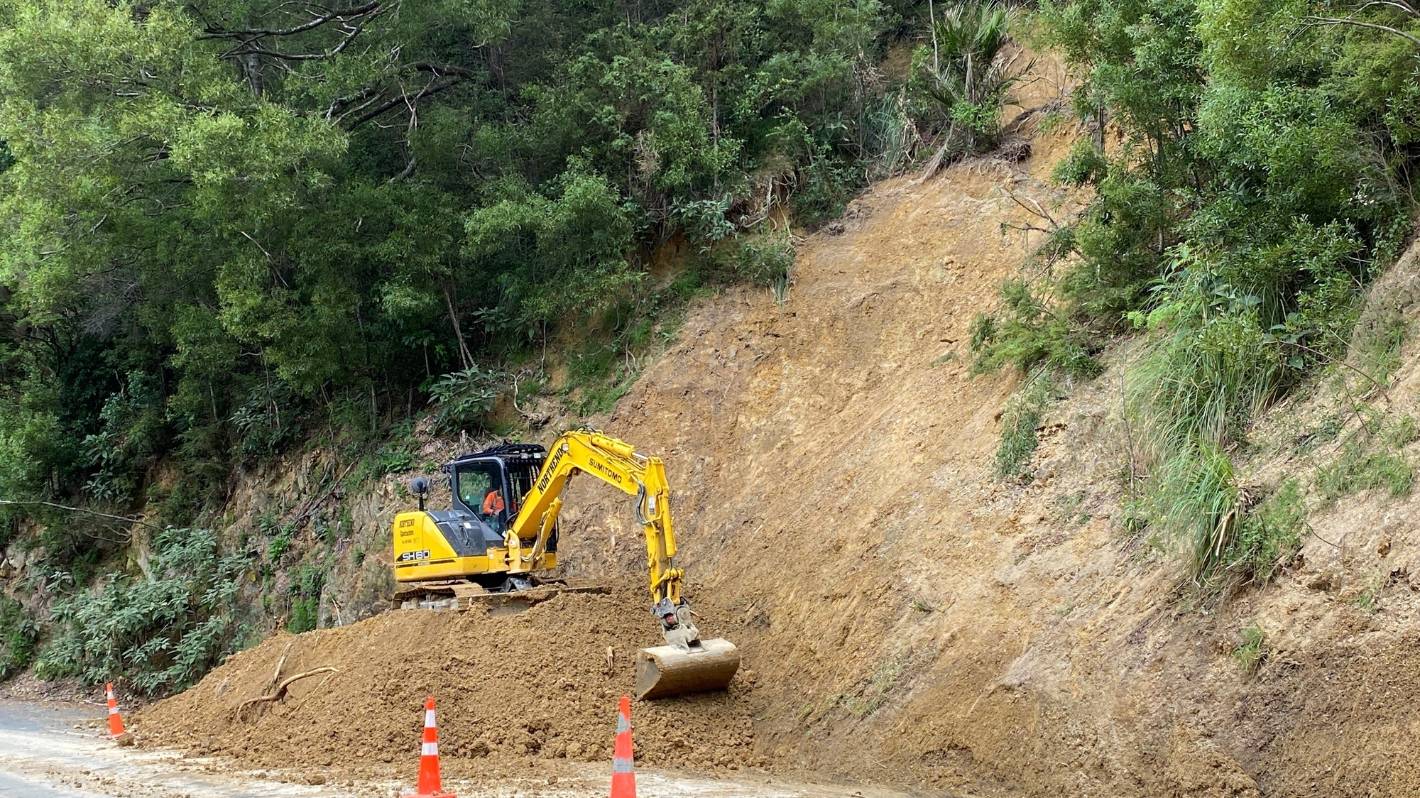 A digger works to clear a large slip on Russell Rd, between Helena Bay and Mōkau, on Tuesday. Slip repairs on this road are expected to take all week.

Heavy rain that caused weather chaos across the country has caused millions of dollars worth of damage in Whangārei.

“Torrential” rain overnight Thursday and into Friday caused slips and flooding across the district, including closing State Highway 1 at Whakapara overnight Friday.

The rain came just days after heavy rain on Tuesday also caused flooding in the area.

The flooding was so severe, Te Whatu Ora – Te Tai Tokerau Medical Officer of Health Dr Catherine Jackson issued a warning on Friday for people in Whangārei to stay out of waterways, floodwaters and harbours to avoid contact with contaminated water.

READ MORE:
* Weather: It’s going to be a showery week ahead, particularly for the North Island
* Heavy rain, severe gales to batter top half of North Island from Thursday night
* Reports of flooding in Northland as bad weather expected for rest of week

Residents are advised to stay out of the water until five days after the sewage spill, and not collect shellfish likely to be contaminated with human sewage for at least 28 days.

Whangārei District Council expected the clean-up costs would be in the millions, with 10 roads still impacted by slips on Tuesday, a spokesperson said.

Russell Rd, on the Oakura Coast, was expected to take all week to clear, with two large slips between Helena Bay and Mōkau.

At least 40 truckloads of material had already been removed, workers estimated.

Slips on Mount Tiger Rd, in Whangārei Heads, Whananaki North Rd and Rockell Rd were also due to be cleared this week.

Tree work would also be done this week on Murray Rd and Opouteke Rd in Pakotai, and Kauri Mountain Rd in Whangārei Heads.

At a slip site on Matapouri Rd near popular Sandy Bay beach, there had been road movement.

The road would be closed on one lane until the council could assess what happened and what action was required.

Finlayson Brook Rd in Waipū was still closed at a point where there was a substantial dropout during a storm earlier this year.

The clean-up was expected to cost Far North District Council less than $100,000 – making it minor in the district compared with storms earlier in the year.

State Highway 1 was still closed indefinitely at Mangamuka Gorge, south of Kaitāia, due to slips caused by heavy rain in August.