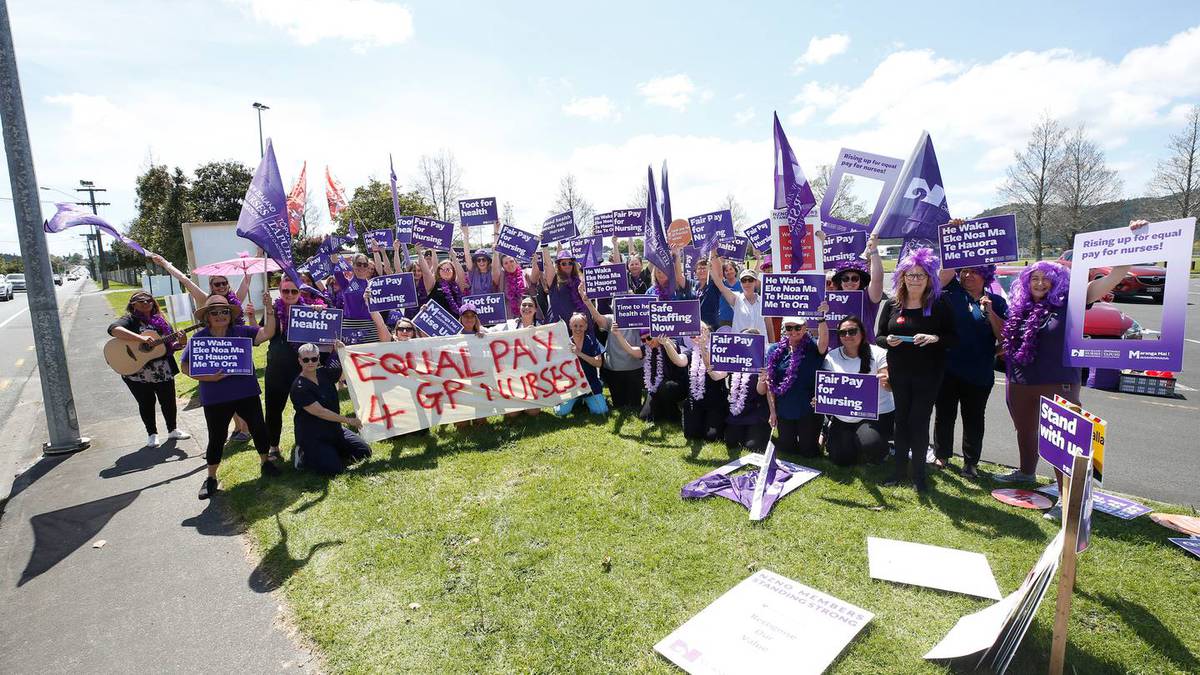 Community nurses gathered together in October to protest being paid less than their Health NZ counterparts. Photo / Michael Cunningham

Community nurses are in for a pay rise across Northland after the Government announced pay parity in the health sector, but General Practice nurses have been left out.

“… Cabinet has agreed to ongoing funding of $200 million a year so that thousands of workers in places such as aged-care facilities, hospices and Māori and Pacific health-care organisations can be paid more,” Health Minister Andrew Little said.

Little said the pay difference between nurses and healthcare workers in public hospitals and the funded health sector was the result of the Government’s earlier actions to lift the pay in the sector.

“Aged-care facilities, hospices, homecare support and Māori and Pacific healthcare organisations will be first, because there is clear evidence that that is where the biggest pay gap is,” Little said.

Little said the announcement would equate to 20,000 people getting a pay rise in health organisations across the country that have struggled to keep staff because they can’t afford to pay as much as Te Whatu Ora.

Aged Care Association chief executive Simon Wallace said the team was “so pleased the Government has made good on the promise.”

College of Primary Health Care Nurses chairwoman Tracey Morgan said primary health care and Plunket nurses currently earn up to 20 per cent less than those employed by Te Whatu Ora, and Māori and iwi provider nurses were paid up to 25 per cent less.

However, the announcement excluded nurses working in Northlands general practices who had been calling for a pay rise during strike action, but Little didn’t rule it out for future announcements.

“However, I have to be clear that this package will not mean significant change immediately for those working in GP practices,

“Decisions about what is paid to whom have to be based on hard evidence, and the data provided to me by both the Nurses Organisation and the GP organisation GenPro for that sector did not show any real evidence of pay difference at this point,” Andrew Little said.

“Practice nurses can get a 10.3 per cent pay rise by driving down the road, it’s pretty tough.

“From a practice nurse point of view we’re finding it really difficult to retain staff, we’re losing people to Australia, to the DHB and that’s really frustrating.”

Although she’s happy her colleagues across the industry are getting a pay rise, Nicole Little said practice nurses feel undervalued and the role is becoming undesirable for new nurses.

“Look at what practice nurses did over Covid, we worked our a**** off, we worked long we worked hard to protect the DHB services.

“The community pay for it in the end.”

“Small rural general practices and community-funded rural hospitals do not have the financial flexibility to be able to increase their wages to the DHB equivalent,” Bolden said.

The funding will get to the private and non-Government employers through changes to their contracts with Te Whatu Ora and with Te Aka Whai Ora – the Māori Health Authority.

“I expect these contract changes will happen in the first part of next year, follow by mental health and addiction facilities, organisations caring for the disabled and other types of residential care, and then other Government-funded health services.”