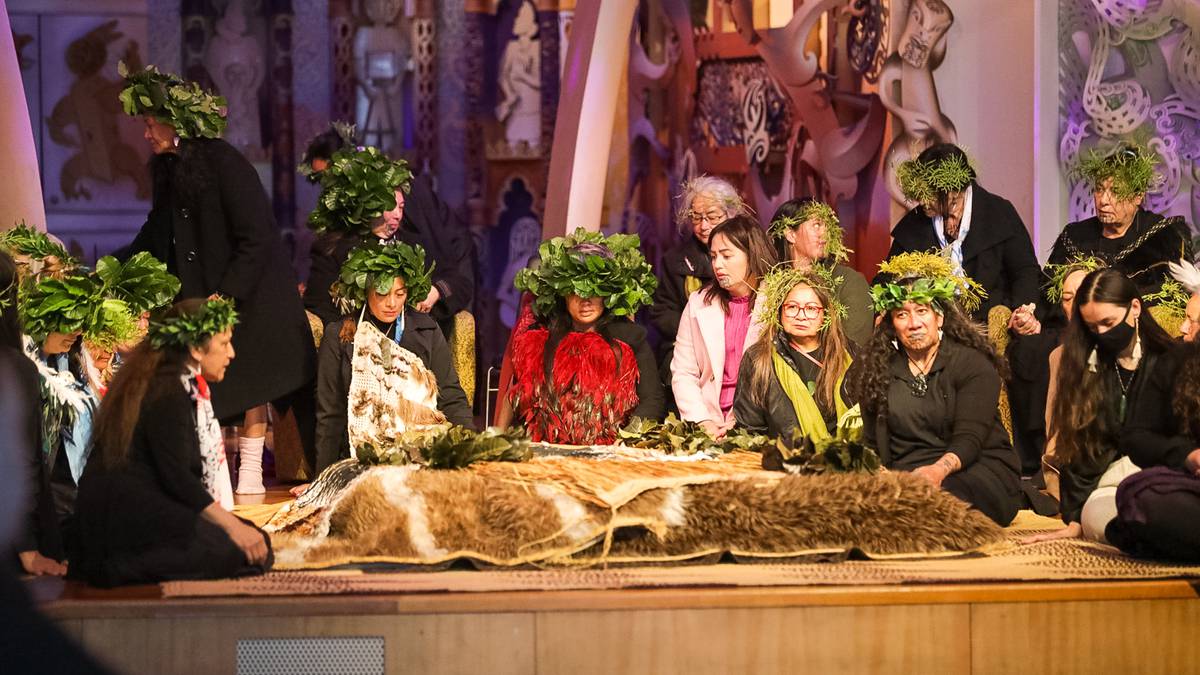 The tūpuna and karāpuna [ancestors] laid on Te Atamira [the stage] during the repatriation ceremony. Photo / Te Papa

One hundred years of waiting is almost over for Tai Tokerau iwi yearning for the return of their ancestors stolen by an infamous Austrian grave robber.

Seventy years of appeals and negotiations came to fruition on October 2 when 60 Māori and Moriori remains, swiped in the late 1800s by notorious Austrian grave robber Andreas Reischek, returned to Aotearoa.

Among them were 20 skull bones plundered by the taxidermist from Whangaroa, Waikaraka, Taiharuru, Waipū, Paparoa, Pahi, and from caves and crevices in Aratapu and Maungatūroto.

The kōiwi, stolen during Reischek’s 12-year stint in New Zealand, were kept in the Vienna Natural History Museum for more than a century.

Ngātiwai Trust Board chairman Aperahama Edwards said for more than 100 years the hapū, iwi, and descendants of the stolen ancestors have been asking and waiting for their return.

The way in which the taxidermist had helped himself to their ancestors made the return of the kōiwi “extremely significant”.

“They were stolen from their resting places in sacred sites across the district – deliberately, and the tapu and tikanga was violated,” Edwards said.

“The appalling thing is these are people, these are our ancestors but at least now they may rest.”

Edwards was overcome with emotion during the repatriation ceremony earlier this month.

“We could feel the yearning of those tūpuna to come home and we yearned for them to be home.”

At the ceremony were kaumātua in their late 80s who had grown up with the stories of kōiwi been taken, Te Rūnanga o Whaingaroa representative Raniera Kaio said.

“Even those most hardened kaumātua and kuia had tears in their eyes watching their tūpuna be returned.”

Kaio said the next step was to research where exactly in Whangaroa the kōiwi were stolen from. However, there were plans to host a meeting soon to select a date for their return.

“Early indications are that they are from Taratara on our maunga on the western edge of the harbour in Otangaroa.”

He said one good thing about Reischek – “a sort of saving grace or not” – was that he kept fastidious records.

“He kept almost the exact longitude and latitude of where he took the kōiwi from.”

Kaio said other ancestral remains had been taken from many caves around Taratara.

“It’s one of the reasons local hapū closed Taratara down from being traversed by just anybody and everybody. It’s our way of keeping our ancestors safe.”

Arguably, New Zealand first learned of these specific thefts in 1930 when Reischek’s son published his father’s diaries and manuscripts about his time in Aotearoa.

Hakiwai said the reality was museums and universities worldwide, under the guise of research for “enlightenment and Social Darwinism”, took kōiwi and that “was wrong”.

In July this year, the programme achieved the largest ever return of ancestors belonging to a single imi (iwi, tribe) in the Chatham Islands.

“Our ancestors were swapped, exchanged, stolen and taken overseas so the programme was established with the full intent of ensuring that the national museum [Te Papa] and other museums own our past with a view of reconciling and addressing the wrongs of the past,” Hakiwai said.

There was a long road ahead in terms of the repatriation work to be done given the large number of nations and museums around the world still in possession of ancestral remains, he said.

And not all of the museums were onboard.

“If you take the National History Museum in Vienna, when you consider that the ancestors were stolen and taken and looted… Andreas Reischek knew what he was doing was wrong but he did it anyway.”

In 2015 Te Papa asked the National History Museum for the kōiwi to be returned.

“The answer was emphatically no,” Hakiwai said. “That museum was hard against repatriation and that museum is not alone.”

But the repatriation programme perseveres.

“It’s something that must be done. There are still some museums that cling to the past and still don’t own their past which is really tragic because they must surely realise what their predecessors did was wrong – morally and culturally.”