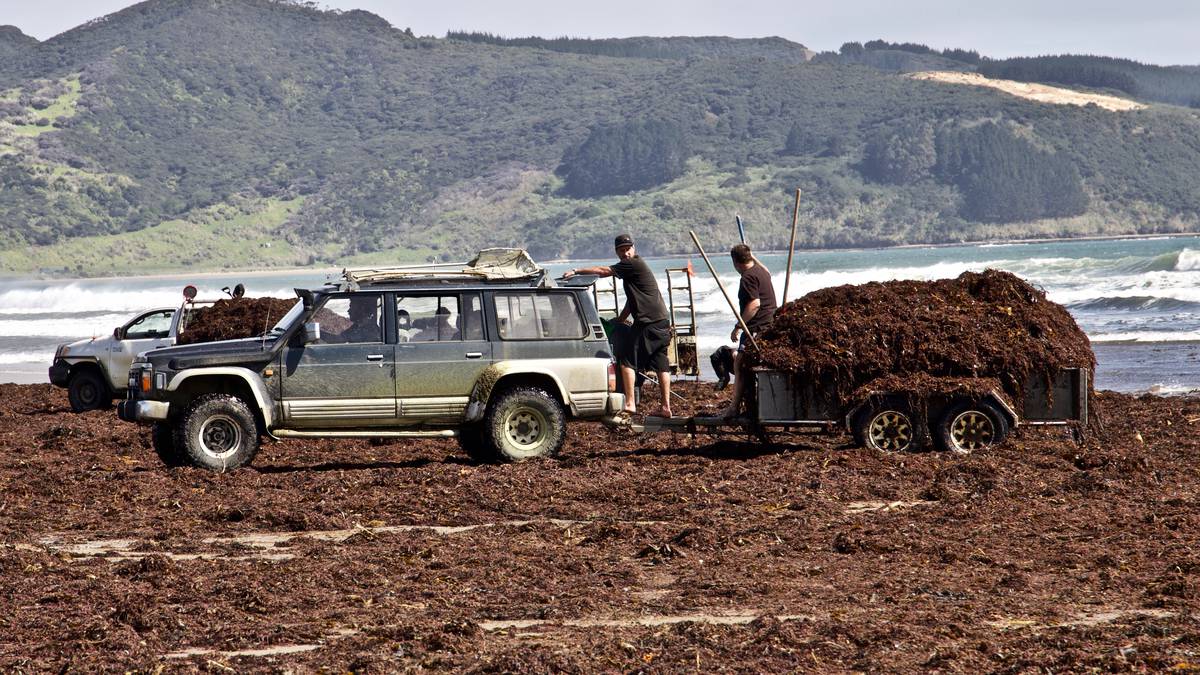 Collecting mussel spat on Te Oneroa-a-Tōhe/Ninety Mile Beach is a regular event, with the spat going to most of the country’s mussel farms.

But most of the mussels in New Zealand’s aquaculture farms come from spat collected at Te Oneroa-a-Tōhe/Ninety Mile Beach, that in turn came from other Northland sites, new research has found.

The mussels fuelling Aotearoa’s lucrative aquaculture industry come from reefs located around Te Oneroa-a-Tōhe/Ninety Mile Beach, according to Moana Project scientists who have just released their findings after three years of research.

Mussel spat collectors are seen regularly on the beach collecting tonnes of seaweed that contain the spat to sell to aquaculture farms, where they are grown then sold. Up until now, it had not been known exactly where the spat came from before washing up on the beach

“New Zealand’s green-lipped mussel aquaculture industry is worth $380m annually. The industry is largely reliant on wild-caught baby mussels, known as spat, that wash up attached to seaweed on Te Oneroa-a-Tōhe / Ninety Mile Beach. Until now, we had not identified the source of the spat, and that posed a threat to the aquaculture industry that depends on it,” Dr Romain Chaput, a postdoctoral fellow with Victoria University who conducted parts of the research, said.

“Knowing where the mussel beds are, agencies can work with hapū and iwi to establish a regime of protection that will benefit everybody,” de Souza said.

Chaput said mussels spend up to six weeks as larvae, which means that they can be transported hundreds of kilometres before they land on the beach.

‘’In the Moana Project, we used ocean modelling and genetic analysis to figure out the source of the spat that lands on Te Oneroa-a-Tōhe / Ninety Mile Beach,’’ he said.

“Mussel genetics demonstrate that the spat landing on Ninety Mile Beach are from nearby reefs. The spat from the local area are similar genetically, but distinctly different from mussels from other parts of Aotearoa.”

Chaput said this is supported by the ocean modelling done by the Moana Project.

“By tracking particles in ocean hydrodynamic models, we found that the spat landing on Te Oneroa-a-Tōhe / Ninety Mile Beach is most likely to come from mussel reefs off Ahipara and to a lesser extent from Tiriparepa / Scott Point and Hokianga.

“The research shows that although mussel larvae can theoretically be transported hundreds of kilometres at sea during their month-long journey, we now know that off the west coast of Northland they are not transported very far at all – the spat come from local mussel beds.”

Kevin Oldham, chair of the Marine Farming Association R&D Committee, said knowing the location of the mussel beds that the aquaculture industry relies on for spat allows resource managers and communities to safeguard them for future generations.

■ Green-lipped mussel) are indigenous to New Zealand and have a moderately complex life-cycle.

■ In the wild, they can live for several years and grow to 20 cm or more (shell length) but most have become reproductively active by the time they reach 4-5cm.

■ Adults release their gametes into the open water. Eggs, sperm and subsequent larval stages are planktonic. They will drift in the sea for approximately three to four weeks before becoming able to settle.

■ In the wild, they tend to settle first on fibrous material (seaweed and seagrass etc) in shallow/inter-tidal water and subsequently actively re-enter the drift before ultimately settling on firmer substrates (rocky and biogenic reefs, often in deeper water).

■ Crop-mussels are grown on so-called long-line systems. Each long-line system is comprised of a taught ‘backbone’ strung across a line of surface floats and anchored to the seafloor at each end.

■ At the sea-surface, the backbone usually extends across about 110 m and carries ‘dropper ropes’. The crop mussels are seeded onto the dropper, which is suspended from the backbone in a series of loops. Depending upon water-depth, each loop may extend to about 20 m.

■ A backbone may carry approximately 2.5km–3.5 km of dropper in total.