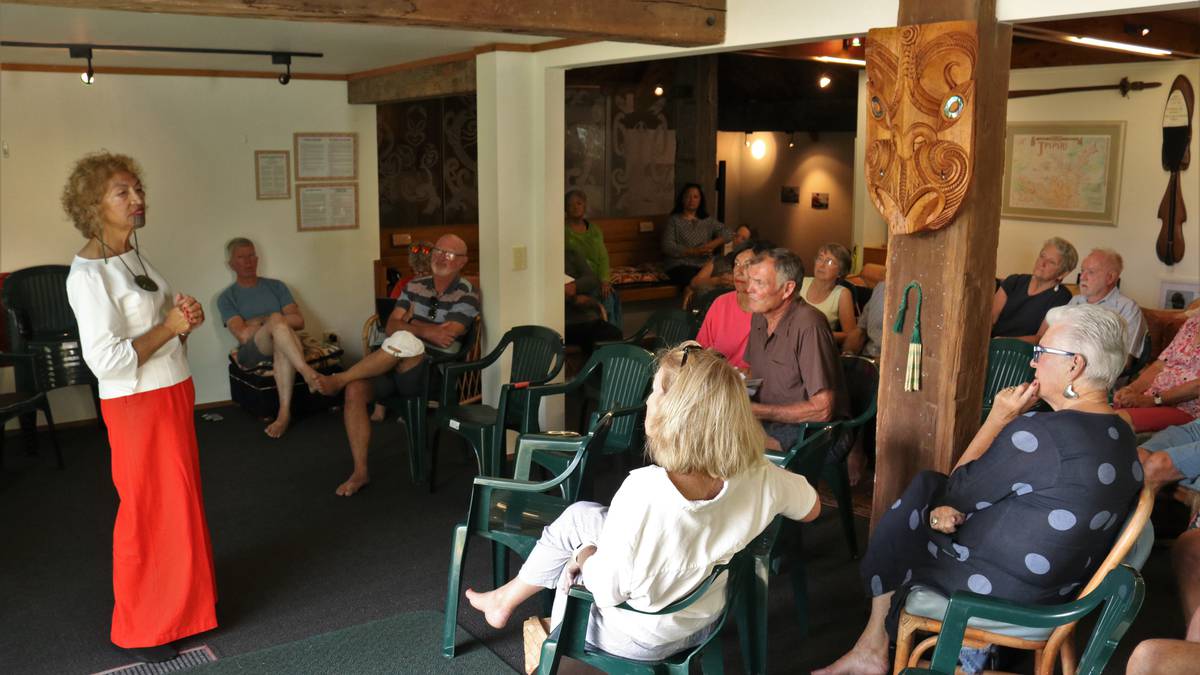 Should Russell’s name be decided by referendum?

Does the name debate risk dividing the sometimes fractious town?

Would striving to avoid division be pandering to a vocal minority on social media?

Those were just some of the issues debated in a series of public meetings today about a proposal to change the town’s name of 179 years back to the original Kororāreka.

Two other options — the dual name Kororāreka/Russell and the “alternative names” option of giving both equal status — were rejected by the New Zealand Geographic Board but remain on the table, depending on the outcome of public consultation.

About 30 people attended the first of three meetings today. They were a mix of Māori and Pākehā, business owners and retirees, kids and kaumātua, and even former Prime Minister Jenny Shipley.

Most were local but several travelled from Whangārei. One even drove from Waiwera after reading a newspaper report about the proposal.

A clear majority supported some form of change but some were concerned about the process or the debate’s potential effects.

Russell’s Ross Blackman, a former Team New Zealand boss, said a lot of work had gone into the proposal before it was made public, and it seemed the board had made up its mind already.

“Either I’ve been living under a rock or I just wasn’t made aware of it.”

Blackman said it could be hard for people to voice a contrary opinion so “the only completely inclusive way” to decide was by referendum.

Russell had been divided before and he didn’t want to see it split again.

“How are you going to communicate this to people out there who may see something on Facebook and form an opinion that’s not fully informed? How you bring them with you will decide how divisive this becomes,” he said.

Others also called for a vote to settle the name debate but Shipley said a referendum would miss out children.

They were likely to have a different perspective, especially with New Zealand history becoming part of the school curriculum this year.

“It’s not just a ratepayer question, it’s intergenerational to who we are and where we stand.”

She acknowledged concerns about social division but said that shouldn’t be allowed to silence debate.

“A small group of highly vitriolic people will create a crowd, which is amplified by the media, and then we start saying we are a divided nation. There is division in society but kow-towing to it is not a solution. Don’t give in to those who want to take us on a race to the bottom,” Shipley said.

Up to 70 per cent of properties in the town were occupied only a few weeks a year. A ratepayer poll could give those people a say while leaving out others who had strong connections but no property.

Besides, no vote was held and her tūpuna (ancestors) weren’t consulted when Ōkiato was renamed Russell or when the name was later transferred to Kororāreka, she said.

Other participants, including Kathy Williams, worried about the cost of a name change.

“Who’s going to bear the cost of changing everything? Will it be the ratepayer, or will it be the government? With the state of the country we can’t afford it.”

Marae trustee Howard Reti, however, said that didn’t compare to the “immense cost” of having the town’s original name taken away.

He likened the loss of identity to having a cloak from which a feather was removed each time someone called the town Russell.

“Now my cloak is bare and there is only muka [flax fibre] left. This is about putting that cloak back on my shoulders, for my children and grandchildren.”

Lodge owner Brad Mercer, who favoured outright change, said the proposal was a name restoration rather than a name change.

It was worth remembering, he said, Lord John Russell had never been to Russell, and that his name was originally given to Ōkiato. It was only after the capital moved to Wellington and Ōkiato burned down that the name somehow drifted north to Kororāreka.

The board’s proposal was just the start of the consultation process, Mercer added.

However, Ōpua resident Angus Ross, who supported the dual name Kororāreka/Russell, said Lord Russell’s lack of connection to the town was “a red herring”.

“The identity of Russell has surpassed Lord Russell. The name has been here for 180-odd years and there’s been a lot of history since then. We should cherish both names,” he said.

Some Russell residents told the Advocate the meeting should have been held in neutral territory such as the Town Hall.

Rewiri conceded it took courage for people unfamiliar with the marae to come into the very space that was driving the proposal.

However, holding the hui at the marae meant good standards of behaviour could be set.

Despite plenty of back-and-forth discussion the morning meeting was respectful and calm.

■ Submissions can be made until April 18 at linz.govt.nz or by emailing nzgbsubmissions@linz.govt.nz.