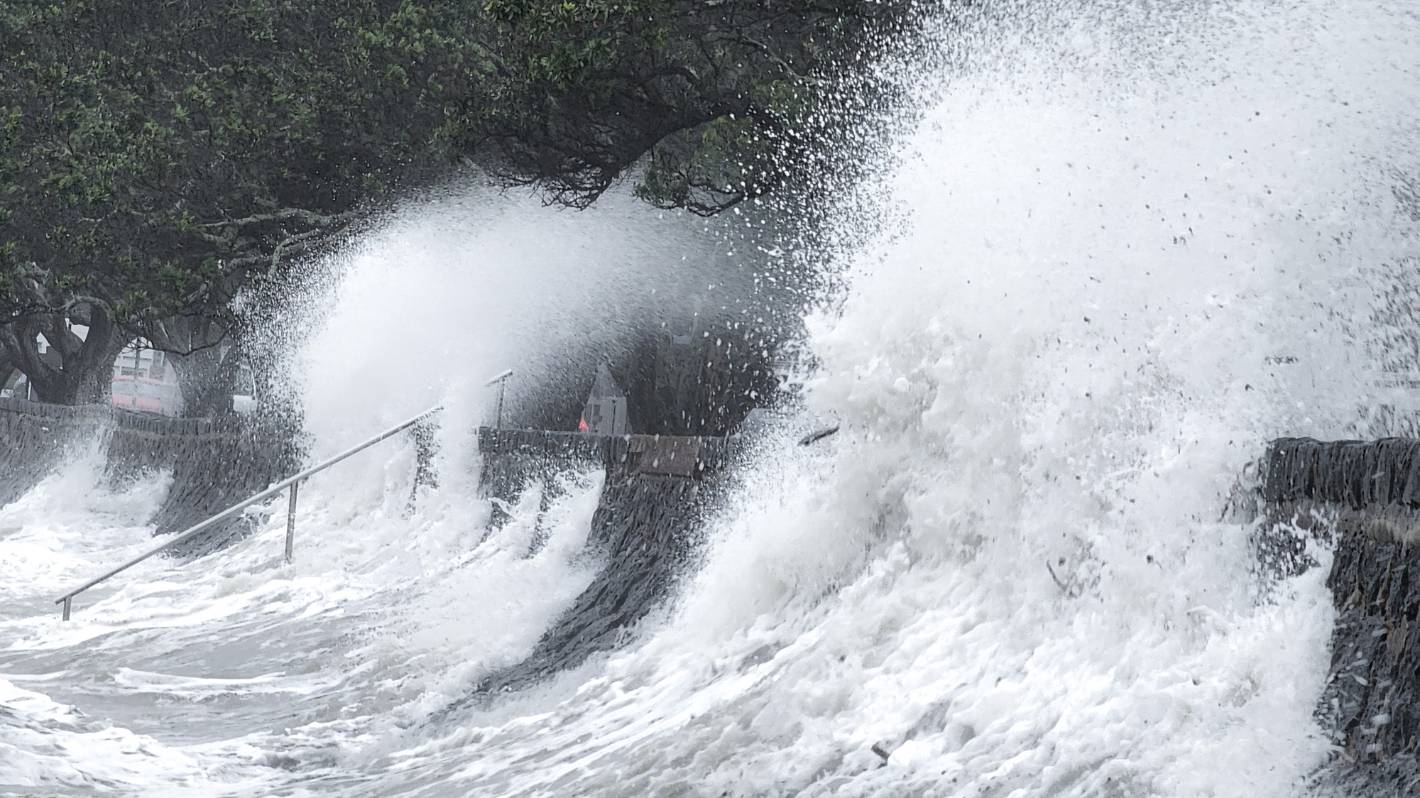 Tamaki Drive in Auckland gets hammered by waves on August 18. Heavy rain, severe gales and large waves forecast for Thursday evening and Friday will likely replicate these scenes.

Heavy rain, severe gales and large waves are set to batter the north and eastern parts of the North Island from Thursday night.

The low, which is due to bring significant rain and strong easterly winds, has led MetService to issue a severe weather warning for Coromandel as well as watches for a number of other regions.

Broadcast meteorologist Angus Hines said it was typical in spring for fast-moving weather systems to bring severe weather for a day or two.

“There’s an energetic low with a broad band of rain, which will bring another dose of fairly heavy rain to Northland and now spreading out to other regions,” he said.

READ MORE:
* Reports of flooding in Northland as bad weather expected for rest of week
* Dozens of communities at serious flood risk and unprepared – report
* Risk of summer dry spells, as La Niña brings more winds from east, northeast
* In pictures: Blood Moon seen from NZ and around the world

Te Tai Tokerau was hit by heavy rain on Tuesday, with up to 140mm falling in eastern spots like Ngunguru within 24 hours.

This weather system was forecast to move into Gisborne, north of Tolaga Bay, on Wednesday, with heavy rain forecast until 6pm.

The Hawke’s Bay ranges north of Hastings were also set to get heavy rain in the 12 hours from midnight Wednesday.

MetService warned rain on Thursday was likely to become heavy from evening and continue during Friday, with easterly winds approaching severe gale at times.

The low would then move to north Auckland.

Strong winds were expected to hit north of the Harbour Bridge, and Great Barrier Island from 6pm Thursday, with the easterly winds possibly approaching severe gales at times.

Hines said it was difficult to forecast the weather in Auckland for the Rugby World Cup final on Saturday night, but showers were expected in the area on the day.

Meanwhile, the Coromandel Peninsula was expected to get the worst of the rain, with 100mm to 140mm forecast in the 24 hours from 1am Friday.

As well as the orange heavy rain warning, the peninsula was under a strong wind watch for easterly winds approaching severe gales at times from 6pm Thursday.

The Bay of Plenty, including Rotorua, was set to get heavy rain in the 18 hours from 9am Friday.

Bay of Plenty, east of Whakatāne, and Taupō, east of Lake Taupō, would also cop east to southeast winds from midday Thursday, with speeds approaching severe gales at times.

Gisborne was also expected to get more heavy rain on Friday, with MetService due to issue either a watch or warning closer to the time.