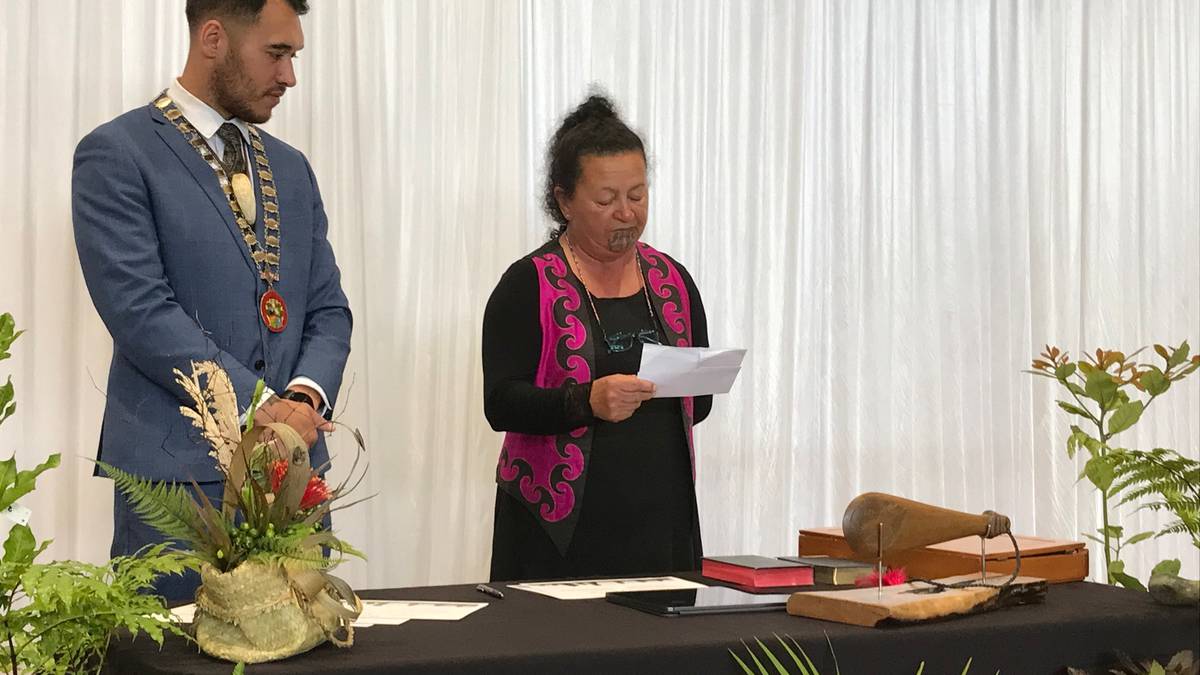 A Far North District councillor-elect who used her own unofficial document at the new council’s October swearing-in ceremony, will on Thursday sign her official declaration.

She read it out as her oath of office, her document sitting atop the council’s official declaration.

Halkyard-Harawira’s document was signed by herself and FNDC Mayor Moko Tepania in the hall after the ceremony.

Halkyard-Harawira, the Ngā Tai o Tokerau Māori Ward councillor-elect, is the only Northland council politician still to claim their place as a councillor from among more than 40 across FNDC, Kaipara District Council, Whangārei District Council and Northland Regional Council from among those who attended each council’s swearing-in ceremony. All others present used their councils’ official declaration forms.

Local Democracy Reporting Northland asked FNDC whether it was accepting Halkyard-Harawira’s document that was brought to the swearing-in, read out and later signed.

FNDC chief executive Blair King said as a result of signing her own document rather than the official council declaration, Halkyard-Harawira was not yet officially sworn in. She was still a councillor-elect.

“The declaration used by councillor-elect Halkyard-Harawira on October 27 is not the one required by the Local Government Act,” King said.

Tepania said he had signed Halkyard-Harawira’s document on the understanding it would be acceptable to do so, given that it included the required reference to the Local Government Act 2002 and the Local Government Official Information and Meetings Act 1987. It also included reference to the Treaty of Waitangi. However, subsequent FNDC legal advice was that Halkyard-Harawira needed to sign the official declaration.

FNDC meeting minutes from the livestreamed ceremony state Halkyard-Harawira had recited a declaration at the swearing-in ceremony that was legally invalid.

Halkyard-Harawira will be signing the council’s official declaration at Thursday’s council meeting in Kaikohe, King said.

FNDC councillors are elected from three designated geographic wards within the council’s 7324sq km territory – or in the case of its new Ngā Tai o Tokerau Māori Ward, from a single district-wide electoral area. The Mayor and all 10 councillors are required to serve all across the Far North’s 73,800 population, rather than only those in the ward from which they were elected.

“I Hilda Halkyard-Harawira declare that I will faithfully and impartially, and according to the best of my skill and judgment, execute and perform, in the best interests of the Far North district, the powers, authorities, and duties vested in, or imposed upon me as councillor of the Far North District Council by virtue of the Local Government Act 2002, the Local Government Official Information and Meetings Act 1987, or any other Act.

The following is Halkyard-Harawira’s October 27 document:

FNDC provided an English translation of Halkyard-Harawira’s document, after a Local Democracy Reporting Northland request. It is as follows: “I swear/declare that I will work hard for Te Tai Tokerau for the benefit of iwi/hapū in accordance with the Declaration of Independence. I will also pledge to support the people of the district in accordance with the values of the Treaty of Waitangi (by virtue of the Local Government Act 2002, the Local Government Official Information and Meetings Act 1987, or any other Act).”

Local Democracy Reporting Northland asked for FNDC comment on the difference in who Halkyard-Harawira was pledging to support in the two documents.

“Our induction process for all newly elected members provides a crash course on local government rules, regulations and expectations. There is always a lot to process,” King said.

King said that Tepania was fully aware of the requirements for councillors to declare the official oath as required under the Local Government Act.

Tepania had explained this to Halkyard-Harawira who had agreed to take the official oath at the council meeting on Thursday, King said.

In July 2011, Halkyard-Harawira’s husband Hone Harawira was thrown out of Parliament after Speaker Lockwood Smith refused to swear him in as MP for Te Tai Tokerau.

Harawira, the then new Mana Party leader, would not deliver his affirmation as dictated by law, attempting instead to read out an oath in which he swore allegiance to the Treaty of Waitangi rather than the then Queen.

He returned and swore allegiance to the Queen to claim his place as an MP several weeks later.