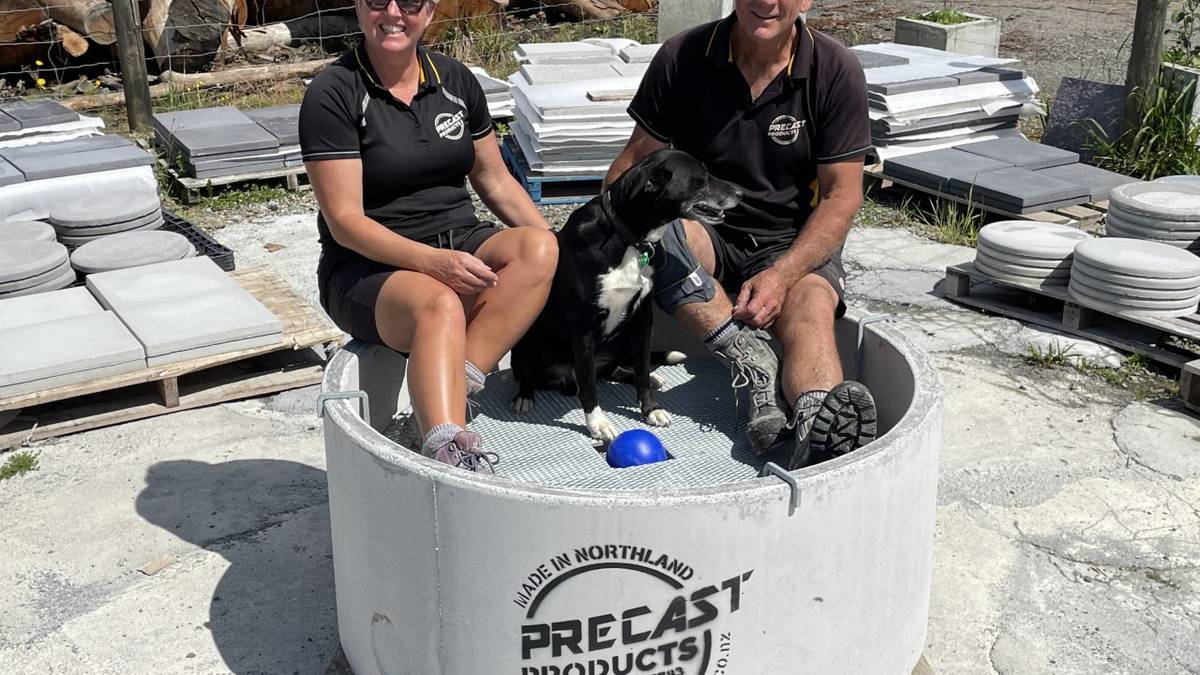 Justin Robb [right] and his partner Sandra are finalists at this year’s Innovation Awards at Fieldays after developing the Paddock Podium which stops lambs drowning in water troughs. Photo / supplied

A device that stops lambs from drowning in water troughs has earned a Far North business a chance at winning an innovation award at Mystery Creek Fieldays this year.

Justin Robb and his partner Sandra, from Precast Products in Waipapa, are finalists at this year’s Innovation Awards at Fieldays after developing the Paddock Podium, a steel grate that sits just below the water line, keeping playful spring lambs out of danger.

Robb said while not every farmer has the problem of drowning lambs, “some do and in large quantities”.

“They get together and play.

“They’re like half goat, they jump into the trough because it’s the highest point.

“I get lots of people saying I’ve lost five or six this year, it’s quite a problem.”

The Paddock Podium, which launched recently, is made of hot-dipped galvanized steel and is suspended from the top of the trough by strong hooks. They sit at a depth of 200mm below the water.

They have been designed to handle multiple wet animals, and are even strong enough for humans to stand on.

Robb said they are removable, so farmers don’t need one for every trough.

“They can be moved with the mob.

“My brief when we started to work on it was that you shouldn’t have to buy one of these for every trough on your farm.

“Many people put rocks in the trough to help the lambs get out, but when you get further south the water is freezing cold.

“They’ll get in and start panicking, another will jump on top of it and they can’t get out.”

Fieldays is the southern hemisphere’s largest agricultural event and is the ultimate launch platform for cutting-edge technology and innovation, attracting over 100,000 visitors and around 1000 exhibitors.

The event will be held at Mystery Creek Hamilton from November 30 to December 3.

Robb said the couple was thrilled to find out they had been accepted as one of 60 finalists.

“We thought what the heck let’s give it a shot and enter.

“We are looking forward to being part of the Fieldays and being able to meet with farmers.”

The couple, who lives in Opua, established their business designing and creating concrete products including livestock troughs, smokehouses, concrete pavers and dog bowls, in 2017.

Robb, who was raised on a farm in Pakaraka, came up with the idea of the Paddock Podium during a brainstorming session with Sandra.

It has been patented and trademarked and the couple is now advertising it “hard out”.

“It’s been a bit of a whirlwind,” Robb said.

“We’ve got one person in Invercargill who wants 50 of them, so we’re just trying to figure out how to make those for him locally.

“We’re aiming to work with farmers to get our paddock podiums made in more central locations for farmers to try and reduce costs.

“We understand that transport costs are crippling New Zealand industry at the moment and this is a big consideration for trying to get them built locally to farmers.”

Justin and Sandra will be at the Innovation Tent during Fieldays.