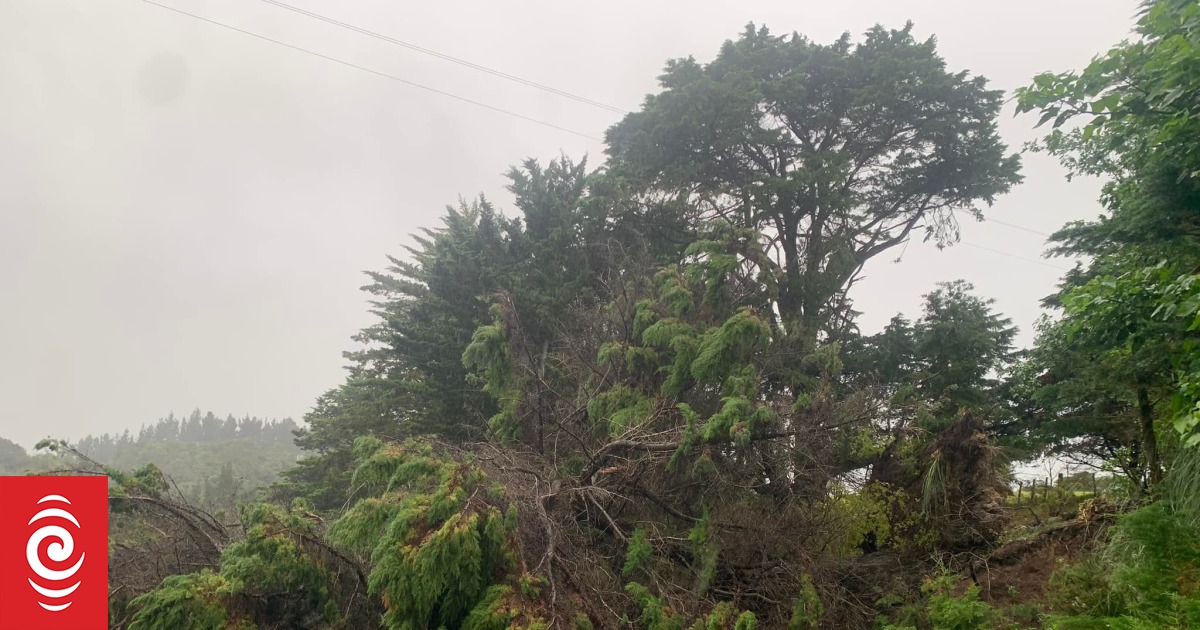 A tree is blocking both lanes of Nook Road in Parua Bay in Northland.
Photo: Whangarei District Council / Claudia Oliver

Cyclone Hale has made landfall on the East Coast with gale-force winds, 6m swells on the coast and heavy rain.

It swept over Northland, Coromandel Peninsula and Great Barrier Island on Tuesday morning, and is forecast to reach Marlborough and the North Canterbury coastline from Wednesday morning.

MetService said Northland and North Auckland have had nearly a month’s worth of rain in the past 24 hours.

The rain was predicted to peak in most areas on Tuesday afternoon, exacerbating flooding in the regions.

Heavy rain warnings remained in place for Northland up to the Bay of Islands, Auckland, Great Barrier Island, Coromandel Peninsula, Gisborne and the Eastern Wairarapa and Tararua ranges.

A strong wind warning was also in place for Bay of Plenty, with southeast winds expected to reach severe gales in places, gusting to 120kmh.

Cyclone Hale was forecast to move off New Zealand to the southeast late on Wednesday.

However, the clouds sweeping out from the low centre and spreading over the North Island are carrying bands of heavy rain and the winds are still strong pic.twitter.com/aMoGYldbDY

The past 6 hours of rain radar imagery shows rain with embedded heavy falls moving across much of the North Island from the east https://t.co/prKU7NLNY1 ^PL pic.twitter.com/N5wBI8SZTd

Gisborne District Council said rain models show the Hikuwai River, a tributary into the Uawa River, could peak at 13.5m at 10pm Tuesday – exceeding the record 12.4m reached in 2005.

Low-lying residents near the river in Uawa had been asked to prepare to evacuate, and farmers encouraged to move their stock to higher ground.

Civil Defence had been activated in all rural and coastal areas.

Shanan Gray from Uawa Civil Defence said anyone in the Tolaga Bay area stuck for an evacuation point could seek shelter at Hauiti Marae, on Hauiti Rd, just off State Highway 35, directly south of the township of Tolaga Bay.

Cyclone Hale was expected to continue to bring heavy rain and gales to the upper North Island.

Gray said the Tolaga Bay township was safe from flooding, and it was the surrounding farmlands that were at risk.

More than 100mm of rain fell overnight from Monday night into Tuesday night in the ranges near Gisborne, and about 40mm in Gisborne.

MetService said the region could expect a further 150 to 200mm millimetres of rain on top of what had already fallen.

Unpaved roads were closed, campers near the coast had headed home, and Tairāwhiti Civil Defence asked people to check on their neighbours.

State Highway 35 would be closed from 7pm Tuesday between Te Puia Springs and Ruatōria after some roads slumped.

Gisborne District Council urged extreme caution on the region’s roads after several people were rescued when their vehicle became stuck in a flooded stream.

The council posted on social media that police and the fire service were called to help those trapped in the vehicle after severe weather hit last night.

Southeast winds are picking up over northern NZ ahead of Cyclone Hale. Here are some of the highest gusts so far https://t.co/Yjbq0jgaoz ^PL pic.twitter.com/eI1wq46Ejr

Unsealed roads would remain closed to freight trucks in the region until 8pm Wednesday.

Tairāwhiti Civil Defence announced the closure, which kicked in at 8pm Tuesday, because of Cyclone Hale.

Forestry company Ernslaw One backed the decision. Regional manager Bill Wheeler said workers were meant to return from holiday on Tuesday, but that had now been delayed until Thursday.

Meanwhile, contractors were dealing with sewer manholes bubbling up due to the large volume of rainfall in the sewer network coming from properties.

Council 4 Waters operation manager Chris Hopman said the emergency valve at the Gladstone Road Bridge had been opened to release the pressure at 8am Tuesday.

“The Wainui Road pump station is at the highest level we’ve ever seen. We ask residents to please avoid unnecessary water use in the kitchen, bathroom and laundry.

“We need to open the valves into waterways to avoid wastewater overflows into people’s homes and through manholes on the street, which can cause health risks.”

Flooding and slips on State Highway 1 across upper North Island

Police advised motorists to avoid travel in Northland unless it was urgent.

Motorists faced detours on parts of State Highway 1 due to flooding and slips from the heavy rain.

A tree had fallen across the northbound lane of the highway near Dome Valley in Warkworth. There were no reports of injuries.

The southbound lane was open, but motorists travelling in the area should expect significant delays.

Further north, SH1 over the Brynderwyn Hills was partially closed in both directions due to severe surface flooding and slips.

Traffic was being diverted through the intersection between SH14 and SH1.

In Whangārei, Riverside Drive was down to one lane and smaller cars were warned to avoid Memorial Drive due to surface flooding, police said.

SH15 between Loop Rd, Otaika and Maungatapere, south of Whangārei was closed due to flooding.

Kokupu Block Rd was also closed due to flooding in Maungatapere.

Police said two vehicles stuck in flooding on Waiteitei Road in Wellsford had since made it out. There were no reports of injuries.

In the already slip-plagued Mangamuka Gorge, north of Kaitoke, another stretch of SH1 had to be closed due to multiple large slips and dropouts, Waka Kotahi said.

Motorists were advised to detour via State Highway 10 or delay travel wherever possible.

There were also flooding and slips on Aotea / Great Barrier Island.

Local board chair Izzy Fordham said there were a few slips being dealt with by contractors, but campgrounds on the island had already cleared out after last week’s storm.

The local emergency management team was on call and Fordham said residents were hunkered down, waiting for the storm to pass.

Emergency services were co-ordinating preparations and residents should stay home during the worst of the weather, he said.

The rainfall on the Coromandel Peninsula was getting heavier on Tuesday morning, with more set to come.

Thames Valley Civil Defence controller Garry Towler said a total of 400mm of rain was expected by 10pm, the equivalent of the total rainfall over the past week.

He said further road closures could be expected later today.

The state highway on the eastern coast of the Peninsula between Hikuai and Whitianga was likely to close, as well as SH25 going into Thames.

Towler said the damage to roads was as significant as a one in 20-year storm event.

MetService predicted the severe weather in the region would ease later Tuesday evening.

A heavy rain warning remained in place for the region till 7pm Tuesday.

The 309 Road across the top of the Coromandel Peninsula was blocked by a slip on Tuesday morning.
Photo: Supplied / Shanx Paarman

More than 100 homes in Coromandel were without power earlier.

“We had quite a lot of impact last night,” Towler told Morning Report.

“We’ve got widespread flooding, we’ve got a number of slips all the way from Hikuai all the way up to Whitianga. Widespread phone and power outages as well.

“The impact is quite dramatic in terms of what is still to come but also we’ve got to keep this in context because we had over 400mm of rain last week and there’s just no capacity to absorb some of this stuff.”

This Niwa screenshot shows how the weather will be affecting the upper North Island around 5pm today.
Photo: Niwa

In Whitianga, 136 properties in the town of Whenuakite had been without electricity since 2am on Tuesday. The network company was investigating the cause of the outage.

At 11am, police advised residents to stay indoors and away from the coast as high tide was due at 11.15am.

Several roads in Thames-Coromandel district were closed because of the storm.