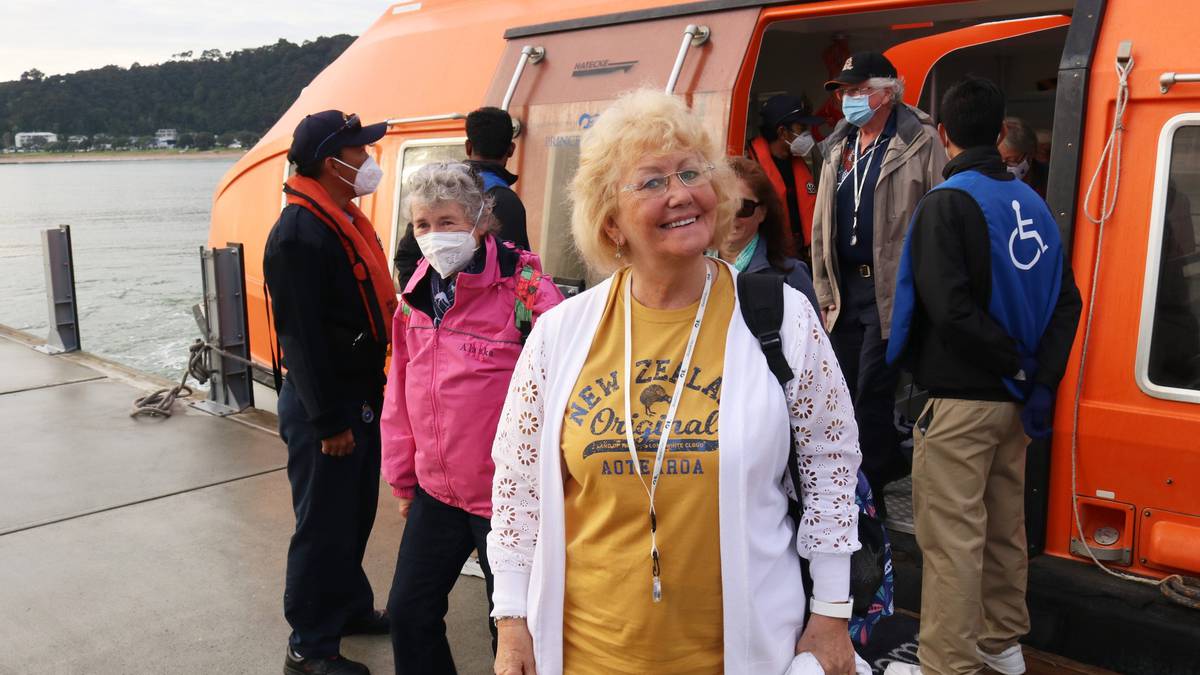 Janine Morton, from Atherton, near Manchester, is one of the first cruise ship passengers to return to the Bay of Islands. Photo / Peter de Graaf

The first cruise ship passengers in Northland since early 2020 have described a welcome by local hapū as “overwhelmingly beautiful”.

When the 3560-passenger Majestic Princess arrived in the Bay of Islands around dawn on Monday the destination of the first tender-load of guests was not the shops of Paihia or the historic sights of Russell but several rows of chairs at a Waitangi sailing club.

There they were offered a pōwhiri by members of Ngāti Kawa and Ngāti Rahiri, as well as a brief insight into Te Tiriti o Waitangi and some amusing anecdotes.

The ship’s hotel manager, Claudio Mazzoni, responded with a mihi in Italian and cruise ship envoy Albert Tana led the passengers in a waiata he was confident everyone would know: You Are My Sunshine.

Janine Morton, from Atherton, near Manchester, said she was on a 25-day trip from Los Angeles to Sydney, her first cruise since the pandemic.

The Bay of Islands was her third stop in New Zealand after Tauranga and Auckland, and she was “definitely” coming back.

“It’s been fantastic. Everyone’s so friendly, nothing’s too much trouble.”

Morton was moved by her first Māori welcome, which she said was sincere and “overwhelmingly beautiful”.

She planned to catch a ferry to Russell and spend the day exploring the historic town.

Julie Readitt, from Troon in Scotland, was first off the tender, making her the first cruise ship passenger to set foot on Northland in more than two years.

She had no doubt how she was going fill her day.

“We’re going on the monster trikes. We want to have some fun.”

Mazzoni said New Zealand was one of the last markets to reopen, and he was excited to be “returning to a new normal”.

Passengers were excited too, going by bookings that were close to 100 per cent, he said.

Te Tii Marae chairman Ngati Kawa Taituha said yesterday’s welcome was a return to the traditions of 200 years ago when local hapū would welcome everyone arriving in the Bay of Islands.

While the hapū still had some questions around the return of cruise ships — especially relating to environmental matters — a series of meetings with Far North Holdings, MPI and other agencies had allayed some of those concerns.

He was pleased the cruise industry wanted to build relationships with local communities, which included sharing the benefits with local conservation groups.

Taituha said the hapū were hoping to resurrect the pre-Covid Māori markets and considering what other cultural products they could offer cruise passengers.

A total of 53 ships carrying just under 94,000 passengers are expected in the Bay of Islands this season.