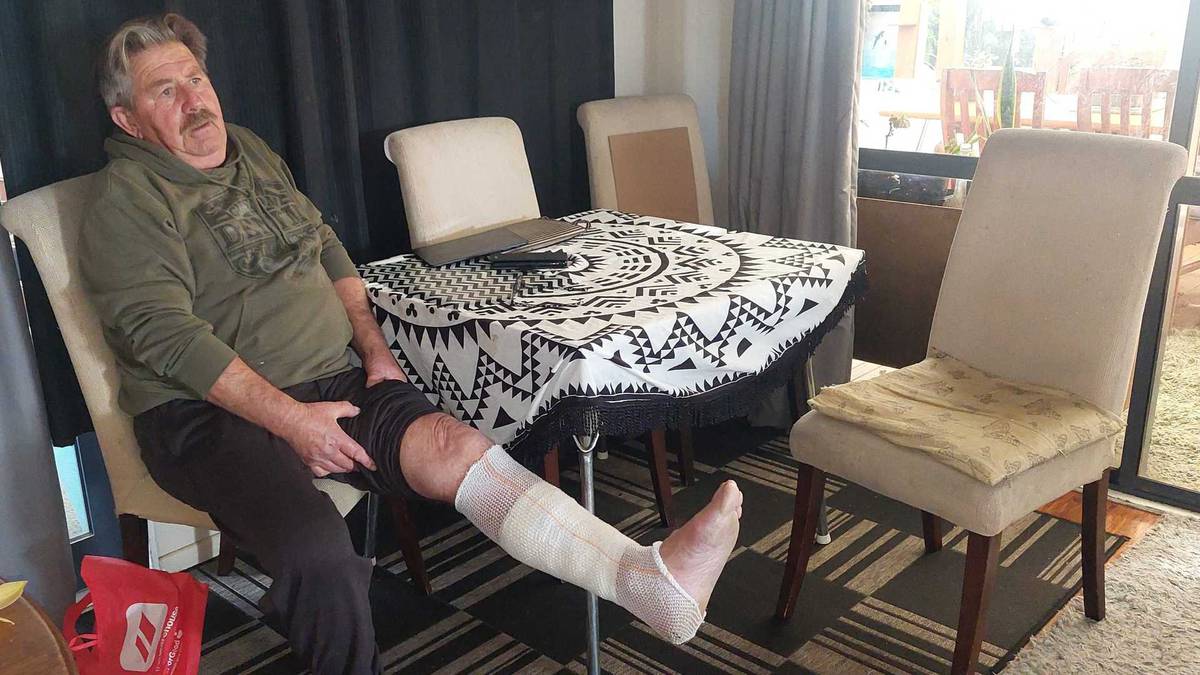 Seventy-six-year-old Chris Radich says he’s been left traumatised from a near-fatal dog attack and wants harsher action from FNDC against the dog owner responsible for the dog that attacked him. Photo/Myjanne Jensen

A Far North man says he wants harsher action from the council after narrowly surviving a vicious dog attack in Awanui recently.

Chris Radich has been left traumatised and unable to sleep after he and his dog Titan were mauled by a dog on their daily walk through the Far North township two weeks ago.

The 76-year-old pensioner said he and Titan were lucky to be alive, after both were seriously injured as a result of the incident.

Yet despite the seriousness of the attack, Radich said the owner allegedly escaped with just a fine.

“I’m furious,” Radich said, “and I want the council to charge the owner, otherwise I’m going to protest outside the Far North District Council office.”

Radich explained the dog, believed to be a pit bull mastiff, would often lunge at him as he walked along Duke St.

He alleged he’d warned the dog’s owner on several occasions about his concerns and how he was worried one day someone would be attacked.

“That particular day, for some reason the dog got off its lead, so all of a sudden I just saw it coming for me,” Radich said.

“It jumped up on me and threw me backward on to the ground and I had to use all of my strength to stop it from going for my throat,” he recalled.

“It then went after Titan and made a mess of him, so when I tried to kick it away, it grabbed onto my leg and ripped out my flesh.

“It made me bleed so much I started going in and out of consciousness, it was really scary.”

Radich explained the terrifying ordeal had left him on edge and had left him with back lacerations and a large hole in his left leg.

He said if it wasn’t for locals who came to his rescue, he doubted he’d be around today.

One of those people was local factory worker Simon Tomlins, who happened to hear Radich’s screams as the attack unfolded.

Tomlins said the dog would often bark at passersby and had even frightened him while working behind his shop.

“Every time Chris or anyone would walk past, this dog would go nuts,” Tomlins said.

“On that day I was outside when I saw Chris walking by and then all of a sudden, the dog went flying out the gate and straight for him.

“He was yelling help, help! My dog! And then the dog latched onto his leg.”

Tomlins said he grabbed an old rake which he used to pry open the dog’s mouth, releasing Radich’s bleeding leg.

The dog then went on to attack Titan under the deck of its house, making Radich ‘hysterical’.

Tomlins said a neighbour, also an alleged relative of the dog’s owner, was able to eventually get the dog back on its chain.

Others also came to Radich’s rescue, helping to keep his leg bandaged as they waited for emergency services to arrive at the scene.

Tomlins said the whole situation was very unsettling and would like to see some sort of system to ensure more responsible dog ownership.

“I had trouble a few nights after it happened and really lost my appetite, it was pretty traumatic,” Tomlins said.

“I feel safer now that the dog is not there and I’d like to hope the owner doesn’t get another similar dog.

“I’d also like to see the council stop these sorts of situations by following up on whether people have registered their dogs or by having some kind of system to see if they’re a competent owner.

“Like the gun laws, we don’t just let anyone go around with guns, then why should just anyone be able to own a dog, especially a dangerous one?”

The attack on Radich comes just months after a man was mauled to death by dogs living on a property in Panguru.

The attack led to a full police investigation into the matter.

This most recent attack was the second serious dog attack for Radich in four years, where in 2018 he was savaged by two pit bulls, leaving his hands seriously damaged.

In that case, both dogs were euthanised and the owner prosecuted.

In this instance, however, while the dog was put down, no charges have been laid against the owner.

“It’s the mental scars that have made it hard for me to get through the day and I don’t understand why FNDC has not taken harsher action,” Radich said.

“Apparently it was the owner’s first incident, but what if the dog had killed me?

“I see this dog’s face all the time and I’m now too frightened to go for a walk because when I see a dog coming I start to shake.

“I want to thank all the people who helped me that day and want to see the council to do its job. I could have died that day.”

Far North District Council Environmental Services manager Rochelle Deane confirmed the incident had been reported to the council and that Animal Management Officers had ‘investigated the matter fully’.

As a result, Deane said, the dog responsible was surrendered and was euthanised.

According to Deane, discussions that Radich previously had with the dog owner were not part of the investigation undertaken by the council, but no previous incidents involving the dog or the dog owner had been reported to the council.

“Every decision to prosecute a dog owner is on based a combination of factors considered together,” Deane said.

“This particular incident was fully investigated and a decision was made on appropriate enforcement action. That decision was based on the evidence presented.

“The council will prosecute a dog owner where it is believed that is the correct course of action to take.

“Enforcement action is decided once all evidence has been gathered, considered and the investigation is complete. Whether or not a prosecution is taken is decided on a case-by-case basis.”

Deane added while incidents involving children were always more challenging for staff, it was vital all enforcement decisions remained impartial and based on the merits of the case.

She said any breed-specific legislation change to the act would be for Parliament to pass and, where required, the council would apply those rules.