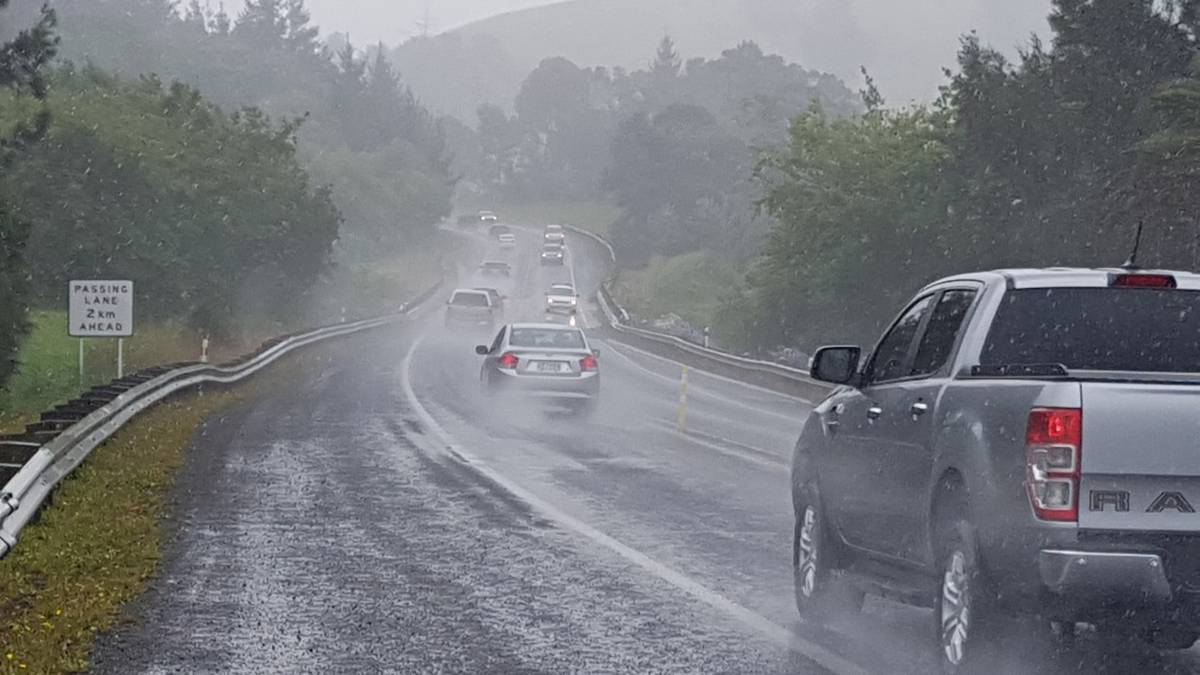 Foul weather has caused chaos on Northland’s roads, with police reporting a number of crashes across the region, including two people dying when their vehicle hit a tree that had fallen across the road in the Far North.

The double tragedy occurred as the vehicle was travelling towards the coastal town of Ahipara on Kaitaia-Awaroa Rd about 11.50pm on Tuesday.

The top of the tree was caught in high-tension powerlines on the far side of the road and left suspended about 2.5m above the ground.

The other end of the tree was just high enough to hit the roof of the ute and kill two of the three occupants. The deceased were a man in the rear seat and a woman in the front passenger seat.

The female driver was knocked unconscious.

The vehicle then continued another 100m towards Ahipara before leaving the road and hitting another tree.

All three occupants were believed to be members of the same family, including a wife and husband.

Ahipara chief fire officer Dave Ross said the deceased were victims of a random tragedy rather than driver error.

No alcohol was involved, everyone was wearing seatbelts, the near-new vehicle was in good condition, and in Tuesday night’s weather they had no chance of seeing the tree until it was too late.

“They did all the right things, but still we have two people dead,” he said.

Senior constable Warren Bunn, of the police Serious Crash Unit, said the accident occurred in the wet and dark in a 100km/h zone.

A motorist travelling in the opposite direction saw the tree across the road and raised the alarm when it was hit by the ute moments later.

The investigation was continuing, he said.

The accident happened about midway between Pukepoto and Ahipara, near Pukepoto quarry. The tree and the high-voltage powerlines greatly complicated rescue efforts.

Volunteers from Ahipara Fire Brigade were able to head straight to the crashed ute but emergency services coming from Kaitaia found their way blocked, so had to turn around and take a 35km detour via Sandhills Rd.

St John Ambulance responded with one ambulance and one helicopter. A spokesman said one patient was taken to Whangārei Hospital by helicopter in a moderate condition.

The incident cut power to 1136 households in Ahipara and surrounding areas. Power was restored at 4.30am.

Traffic on State Highway One south of Whangārei was disrupted several times yesterday, with a serious crash leaving one person in a critical condition.

Police said around 8.55am yesterday, emergency services responded to reports of the crash on SH1, near Prescott Rd, Ruakākā.

One person was transported to hospital via helicopter with critical injuries. The crash caused delays as the scene was cleared.

Around 2pm a horse float flipped on SH1, south of Doctors Hill Rd. There was no horse in the float at the time and it’s believed that strong winds tipped the float over. There were no injuries reported.

Emergency services were also called to a single-vehicle crash in Glenbervie, where a vehicle crashed into a power pole. The crash, on Ngunguru Rd was reported to police around 12.44pm, and cut power in the area.

Again, the crash caused delays while the scene was assessed and cleared. No serious injuries were reported.

Well over 1000 households elsewhere in the Far North were without power on Wednesday due to weather-related faults. As of 10am they included 850 homes in an area centred on Broadwood, between Kaitaia and North Hokianga; 295 households from Te Kao north to Cape Reinga; 88 on Kerikeri Inlet Rd; and 77 in an area west of Awanui. By 4pm 544 homes around Broadwood were still without power.

High winds also brought a tree down across one lane of Kerikeri Rd, near the intersection with State Highway 10, about 10.15am but in that case no one was injured. The road was cleared by the Kerikeri Fire Brigade.

The Ahipara deaths were the first on Northland’s roads for 2023 and brought the national holiday toll to 20. The official holiday period ended at 6am on Wednesday.

Northland’s other holiday road deaths included an 18-year-old woman thrown from a car as it careened about 60m down a bank off Kotata Rise in Morningside, Whangārei, on Christmas Eve. Another person died on December 27 when a car flipped in Tikipunga, also in Whangārei.

Meanwhile, Surf Life Saving Northern Region (SLSNR) is warning holidaymakers that extreme weather will create difficult conditions at beaches across the North Island over the coming days and beachgoers should take extra care.

Strong wind warnings have been issued for Auckland, Northland, Bay of Plenty, Waikato and the Coromandel, with torrential rain, gales and surging swells expected throughout the first week of 2023 on both eastern and western coastlines.

“We’ve seen a limited number of incidents since New Year’s Day at beaches across the Northern Region, a fantastic way to start the year,” he said.

“However, weather and surf conditions across the country have changed over the past few days as the tropically charged storm approaches and many beaches are already experiencing moderate to gale-force winds and choppy surf.

“We’d like to stress the importance of continuing the new year on the right footing, reminding beachgoers of the risks as the weather packs in.”