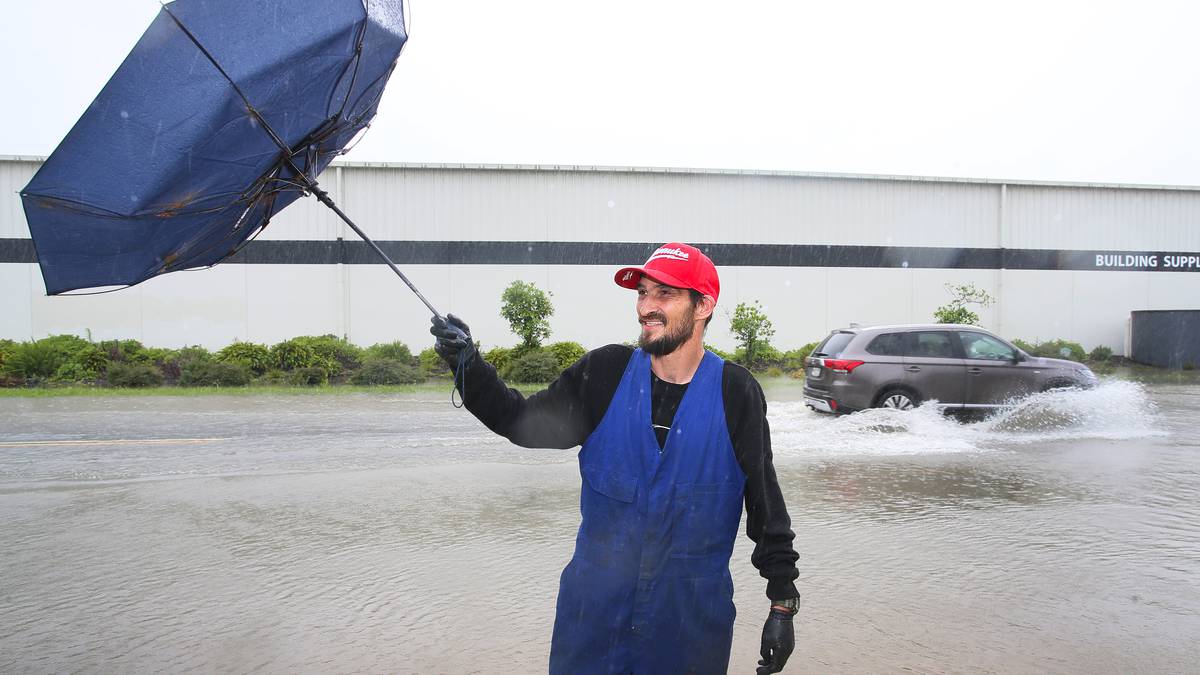 Eels swimming across the road might sound out of the ordinary, but for businesses down Kaka St, in Whangārei, it’s common when the street becomes inundated with storm water.

The road in Morningside is now infamous for recurrent flooding, and while it’s the butt of a joke for some, businesses are becoming increasingly “frustrated” and “disheartened” at the constant deluge of water.

Dean King has been managing BNT on Kaka St for less than 10 months, and he told the Northern Advocate he’s already seen the road flooded between four and five times.

He, along with other businesses along Kaka St, wants to see action from the council to fix the flooding issue.

“I imagine there is some magic they can do,” he said, “there has to be a logical answer.”

He said BNT have given up on insurance, and instead move stock to higher shelves when the water gets too high. King doesn’t wear normal shoes on rainy days either, instead opting for gumboots just in case the store floods.

“Every time it’s like this, when it rained last night, I’m coming into work going what am I getting into?”

He’s also tired of vehicles such as four-wheel drives and trucks flying down the street, spraying water and generating a wake that splashes into nearby businesses.

“Go play in the countryside,” he said, “don’t find a main street with shops and everything else and tear up and down it.”

Mike Smith of Downtown Tools said “idiots” quite often “race and flat out surf waves all over the place.”

He said the flooding is a problem that “won’t go away” on its own.

“It can’t go away until the problem is resolved,” he said.

According to a spokesperson from Whangārei District Council, it is looking into what’s happening on Kaka St, and how best to manage the underlying issues.

“The issue is getting the water that falls within the Morningside catchment into the harbour. The primary route is a pipe system that runs under Commerce St and into the Raumanga Stream,” the spokesperson said.

“A back up system, the Morningside flood relief channel, was installed in 2012 to reduce the extent of large flooding events by conveying water from the end of Rawhiti St, under the railway to discharge next to the railway bridge over Limeburner Stream. If these systems don’t work effectively water backs up in a drain that flows next to the Whangārei Football Club and causes flooding on Kaka St. There are three primary reasons these systems may not work effectively.

“Another issue is if the peak of the rain event occurs at the same time there is high tide, along with strong easterly winds that blow water up the harbour (storm surge). If this happens the tide can hold water up in the stormwater system. It is likely this was a factor with the flooding (yesterday).”

Wayne Stokes from Kia Tupato Security and Traffic said flooding seems to be becoming “more frequent” over the years.

“We took over the building three years ago and we had a big flood just before Covid.”

He said the water reached close to their knees. They also had a heavy whakairo (statue) out the front of their office, which was found floating down the road.

He said another random sight was seeing eels swimming down the road.

Stokes said even in the flooding, people continue to rush through the flood waters, flushing water onto the nearby buildings.

“It’s frustrating and annoying more than anything, that people can still come through (when it’s flooded).”

He said in three years he has noticed a change in the water movement when it floods.

“Three years ago, it was tidal, and water doesn’t run anymore,” he said, “at least it used to run in and out, now it just sits there.”

King of BNT believes the recurrent flooding is evidence of climate change.

“People wonder what old global warming is, turn the jug on and stand back,” he said, “you get to a point of “nothings happening, nothings happening” and then all of a sudden, it’s happening, and that’s where I think we’re at, we’re starting to see things.”

According to a WDC spokesperson, yesterday’s flooding was from the stream being over-filled, with nowhere for the water left to go.

In the past, bark from adjacent gardens at Mitre 10 has washed into Kaka St, blocking the system for water to clear out.

According to council, there are three “workstreams” under way to try to fix the numerous issues.

“The first is to make sure the existing system is operating as effectively as possible. We are working through a permit system to access Kiwirail land to clear the Morningside Flood relief channel with the aim to get this complete this month. The pipe system under Commerce St is cleared routinely. The work on the relief channel includes survey work to check that it is operating as designed in 2012.″

The second phase is to “model” how the stormwater operates currently and “what happens with climate change and sea level rise.”

Council noted that it is “not surprising” that the impact of climate change will exacerbate the flooding on Kaka St.

The final phase is to take the assessment findings for council to consider.

“Due to the impact of the tide it is likely that pumping will need to be one of the options considered. It is anticipated into will take three months to complete this evaluation and develop options.”

The council says it is liaising with commercial properties on Porowini Ave and Kaka St as well as residents on Rawhiti St.

“We are planning for a wider community discussion once the initial survey work is completed, likely in March.”