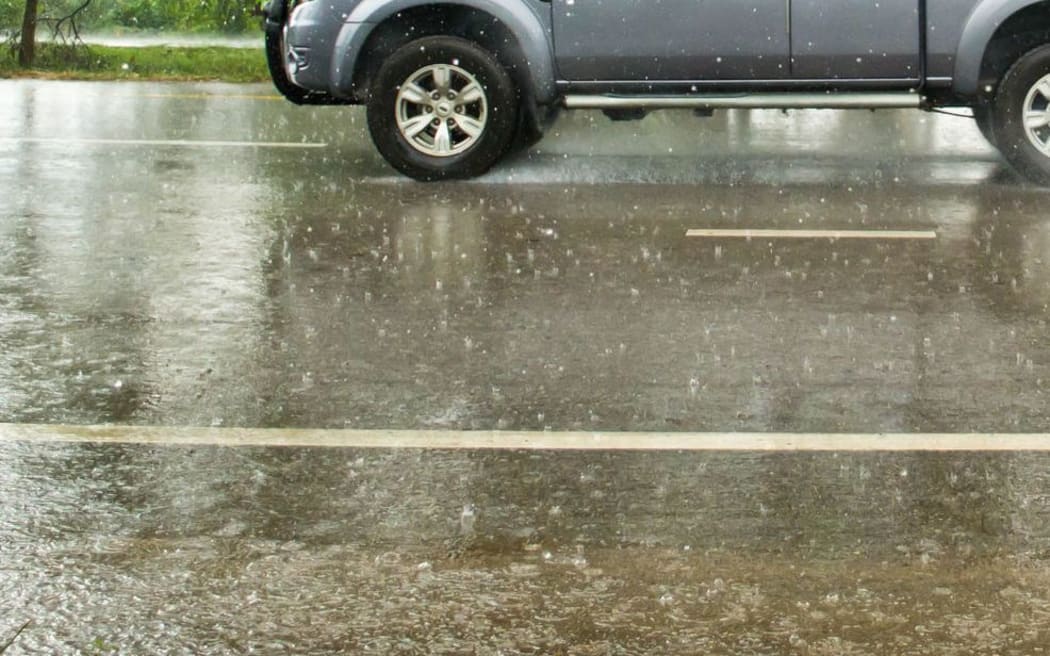 Drivers are warned to take care as heavy rain is forecast in the north and east of the North Island, and could cause surface flooding and slips.
Photo: 123rf

It is set to be a wet weekend, with heavy rain for northern and eastern parts of the North Island today.

Periods of heavy rain are forecast for Northland and Auckland, with an area of low pressure to the northwest of the country expected to bring a moist north easterly flow.

Showers will move east toward Gisborne and Hawke’s Bay, north of Napier.

MetService has warned that slips and surface flooding are possible.

A wet looking start to the weekend across the North Island.

It’s a drier and brighter start in the south but a chilly one. Temperatures last night got down to -5C at Manapouri.

Heavy rain warnings have been issued for the Coromandel Peninsula, Bay of Plenty, the ranges east of Whakatāne, and parts of the East Coast.

MetService said the Bay of Plenty east of Te Puke and parts of the East Coast could have up to 170 mm of rain before 1pm Saturday at rates of up to 25mm an hour, especially about the ranges east of Whakatāne.

The area is already soaked from earlier heavy rain.

And the forecasters warned the same areas could also have more heavy rain from Saturday evening into the early hours of Sunday morning – and the heavy rain warning could be extended.

For the Coromandel Peninsula and Bay of Plenty around and west of Te Puke, 100 to 130 mm of rain was expected until 2am Sunday, falling at rates of up to 20mm an hour.

On Saturday morning State Highway 2 was closed north of Napier due to a fallen tree, near Whirinaki.

Waka Kotahi said there was no detour available, so motorists should avoid the area.

SH2 TANGOIO, HAWKE’S BAY – FALLEN TREE – 6:20AM
Due to a fallen tree, the road is CLOSED between Whirinaki and Devil’s elbow. Please consider delaying your journey as there is no suitable detour available. ^SG pic.twitter.com/v7BB75PfFS

In eastern Bay of Plenty, State Highway 35 was closed at Omaio because of a slip.