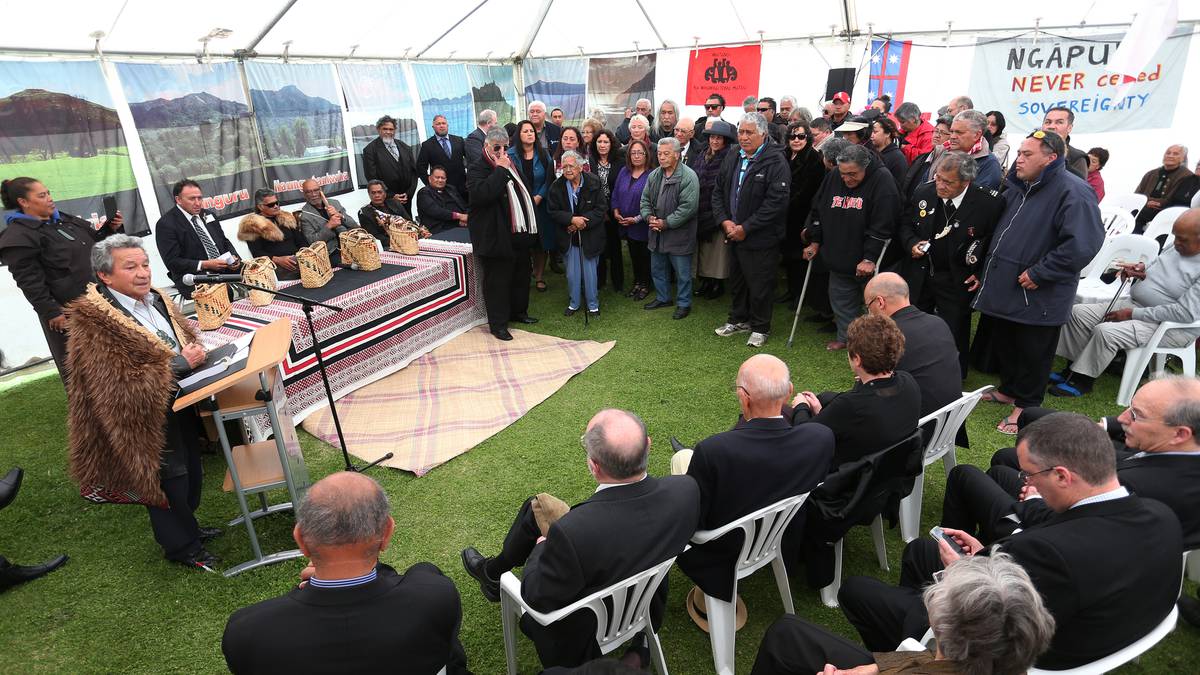 Hokianga academic Patu Hohepa speaks during the formal handover of the Stage One report of Te Paparahi o Te Raki (the Northern Inquiry) at Waitangi in 2014. Photo / Michael Cunningham

A hui attended by as many as 400 representatives of the hapū of Ngāpuhi has invited the Waitangi Tribunal to travel to Waitangi to formally hand over its momentous Northland report.

Saturday’s gathering, at Tahuaroa Conference Centre at Waitangi Treaty Grounds, was called in the wake of the December 23 release of Stage Two of Te Paparahi o Te Raki, also known as the Northland Inquiry.

The almost 2000-page report details the findings of the Tribunal’s years-long inquiry into Treaty breaches, land loss and military action suffered by Ngāpuhi between 1840 and 1900.

The report also urges the Government to return all Crown-owned land in Ngāpuhi’s tribal area — and to start talks with Māori about reworking New Zealand’s constitutional framework in the light of an earlier finding that Ngāpuhi chiefs did not cede sovereignty when they signed Te Tiriti [The Treaty of Waitangi] in 1840.

Saturday’s independent hui aimed to start charting a way forward for the tribe’s often-divided hapū as they seek to revive their Treaty settlement negotiations with the Crown.

One of the organisers, Nora Rameka of Bay of Islands hapū Ngāti Rēhia, said about 200 people attended in person, with a similar number following the discussion online from as far away as Sydney.

Attendees resolved to write to the Tribunal’s presiding officer, Judge Craig Coxhead, and invite him to lead a formal presentation of the Stage Two report to the hapū of Ngāpuhi by the end of March.

Waitangi would be the appropriate place for a handover “because that’s where it all started”, Rameka said.

Ngāti Hine leader Pita Tipene said two days should be set aside for the presentation, to allow time to discuss the report’s contents and to pay respects to those who had passed away before it could be completed.

They included Tribunal members Kihi Ngatai, Ranginui Walker and Keita Walker, and those who gave evidence at the hearings such as Erima Henare, Rudy Taylor and Bob Ashby.

Tipene was also keen to see acknowledgement for those who had worked hard behind the scenes to organise and “strategise” the Stage Two hearings.

They included Willow-Jean Prime (before she became an MP), Season-Mary Downs, Rowena Tana and Moana Tuwhare.

A formal handover of the Stage One report of Te Paparahi o Te Raki — which famously concluded that Ngāpuhi had never ceded sovereignty — was held on the grounds of Waitangi’s Te Tii Marae in 2014.