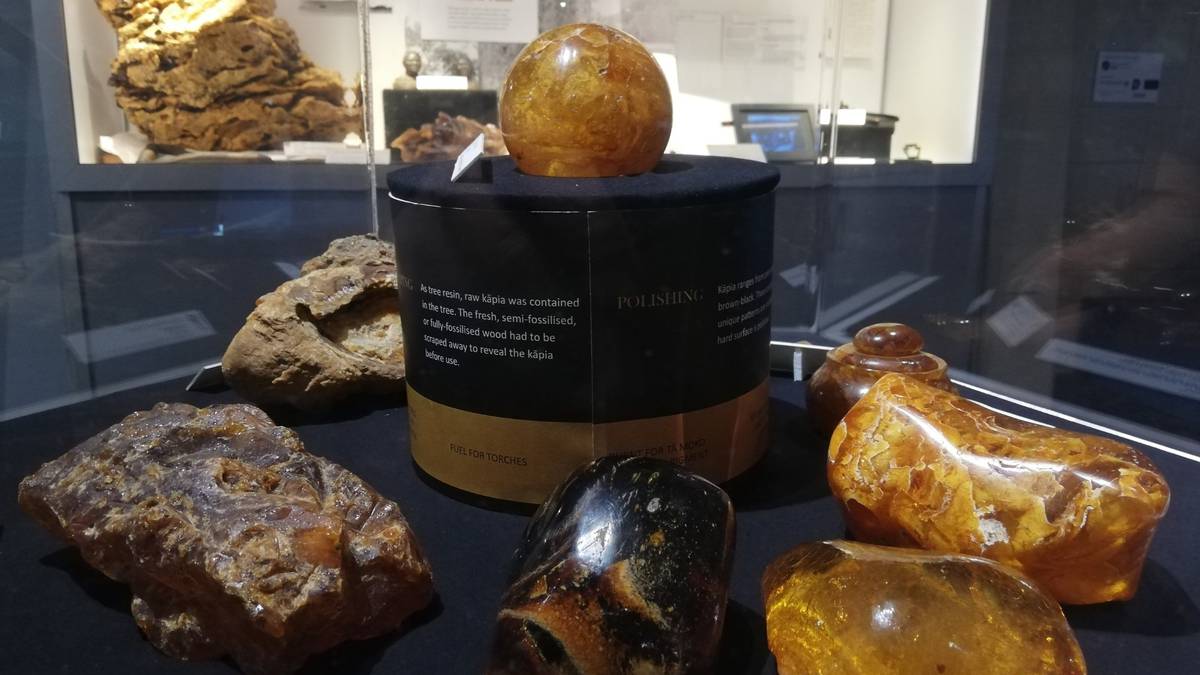 It weighs a whopping 38 kilograms, and was discovered in Hukerenui by Mr Potter, and every time I see it, I have a sudden craving for hokey pokey.

Far from edible however, this golden stack is a massive piece of kauri gum. Kauri gum is the fossilised resin of a kauri tree.

The resin seeps from the tree as a thick, sticky substance that hardens when exposed to the air. These pieces often fall from the tree to the ground where they are covered by soil and forest litter. Some falls to the earth on bark that is shed from the tree as it grows and some seeps through holes and hollows in the tree itself.

Throughout history Māori have used kauri gum in many ways. By burning the gum and mixing the soot with fat or oil, a dark pigment is created which was used to tattoo moko. As it burns so easily it was used to light fires and as torches on the end of sticks. It was used to create jewellery and adornments and was even chewed like gum, giving new meaning to the term “chewing gum”.

The kauri gum industry officially began in 1814 when the first shipment was sent to London. Far from being an instant success, that first shipment wasn’t considered desirable and was dumped in the Thames River.

Despite this initial stumble however, kauri gum would soon be a highly sought-after commodity which saw hopeful prospectors from around the world descending upon New Zealand in search of fortune. Gum diggers were men and women who worked tirelessly in the gum fields.

They tended to be transient people who sent most of their income offshore. This prompted the government to pass the Kauri Gum Industry Act in 1898 which meant gum fields were reserved for British subjects and all other diggers required a licence. However, by 1910 only British subjects could hold a licence.

Gum digging was a major industry for Northland and was by no means restricted to diggers living rurally. In fact, some Auckland families and professionals would spend their weekends in the gum fields searching for their own golden windfall.

In the museum at Kiwi North we have many stunning examples of kauri gum on display. In addition to the giant imitation hokey pokey stack, there are several polished and unpolished specimens, finely carved ornaments, pendants and busts and even a trinket box which upon very close inspection reveals a beetle, trapped by nature in a golden casing, making the whole Jurassic Park concept seem unnervingly viable.

There are some beautiful examples of kauri gum for sale in the gift shop at Kiwi North too, the perfect gift perhaps for that hard to shop for person … a one-of-a-kind piece of natural history, dating back hundreds of thousands of years.