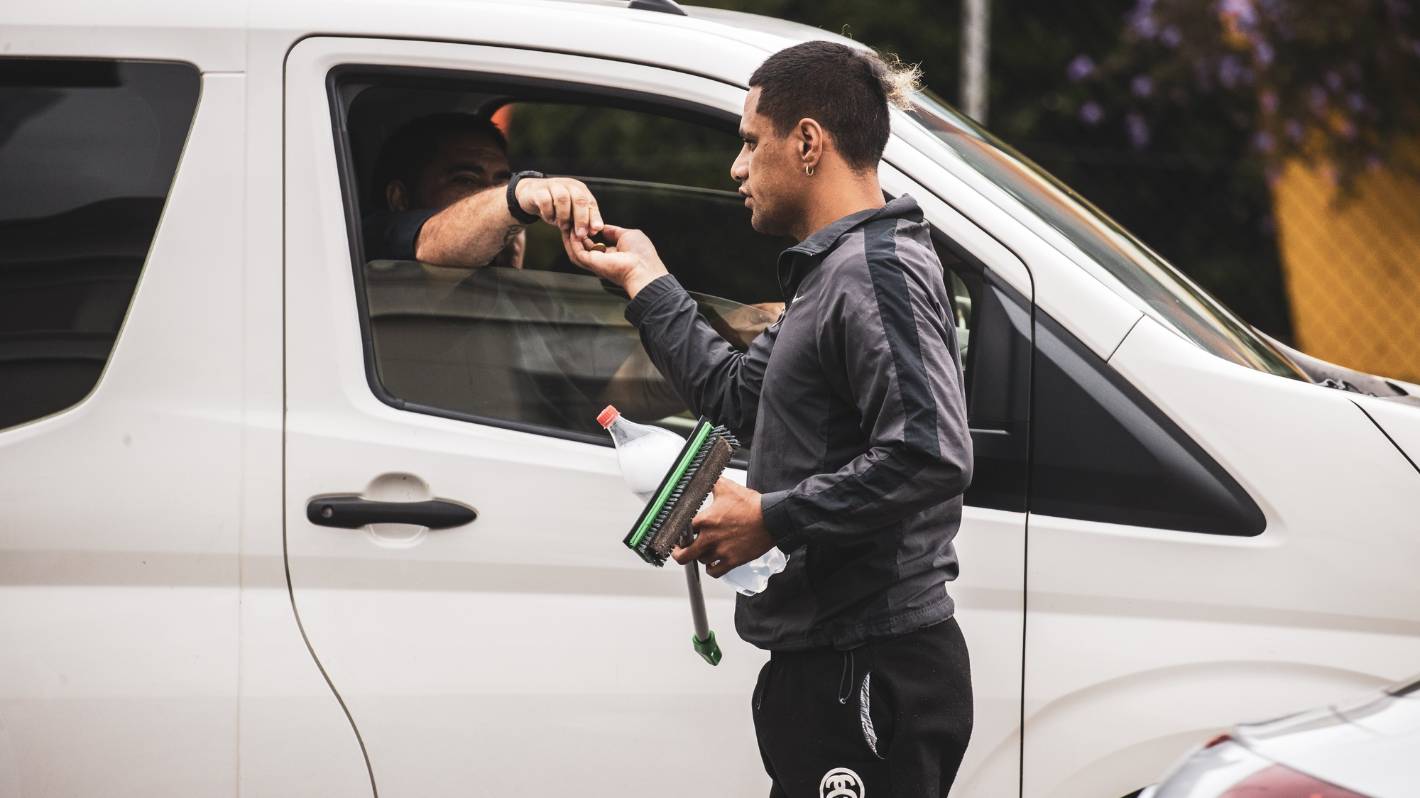 On the corner of Manukau Station Rd and Great South Rd in south Auckland is a busy intersection flanked by Rainbow’s End on one side, and a residential high-rise on the other.

In the middle of the intersection are two slight men, ducking between cars with a big soapy plastic bottle in one hand and a squeegee brush in the other.

They only have one brush between them – so while one makes the money, the other stops to talk to us.

He’s not keen on being named or photographed, but he does want us to know that window washing on the busy streets of Manukau is his choice.

“I don’t know what freedom is, but this is more freedom,” he said.

This window washer has been working his brush for about two years. Before that, he had a couple of shifts a week at an international mail company.

When he’s not out scrubbing windshields, he’s mostly relaxing and drinking. And once the pair have collected enough coins, he ducks into the nearby liquor store for “brunch” – a New Zealand lager.

The pair have at least four run-ins with police the morning we’re out with them. The first time, a cop in a marked car winds their window down and asks them to stop. The second time it’s an officer in an unmarked car, who asks if they’ve had lunch yet and would either of them like sushi.

Finally, another marked car tells one of the guys to “just get off the road” – not that they do.

Even though roadside window washing was made illegal in August 2017, clearly, it’s not been stopped.

According to police data, 2157 people have been caught plying the trade since then.

Over half of those come from one police district – Counties Manukau in Auckland (the window washer we spoke to thinks he’s been caught at least 35 times).

Those who do get caught are typically charged a $150 fine. But in the past five years, just six people have paid up – three more since 2020.

Even compared to the rest of Auckland, offences in Counties Manukau far outstrip elsewhere in the super city.

In Auckland and Waitematā combined, there were just 202 cases of window washers caught by cops over the same five years.

Since 2019, there have been just 23 window washers caught in the region.

Counties Manukau isn’t even the biggest policing district by population – Waitematā is bigger – but still has a higher number of tickets.

Auckland councillor for Manukau, Alf Filipaina, said he suspected the number of infringement notices under-represented how many people were still out on the roads window washing.

Counties Manukau was one of the busiest policing districts in the country, he said. Chances are, staff were busier with more serious crimes to be ticketing illegal window washers.

“It’s all good having the enforcement powers but when do you have the staff not busy for them to do that enforcement?” Filipaina said.

He said he wasn’t surprised by the numbers for Counties Manukau.

It might be because it was still fairly profitable, he suggested.

“Our community out in Counties Manukau are willing to give a dollar here and there to the window washers.

“It’s quite profitable for them, so that’s the other issue.”

He said while there were several community and grassroots organisations trying to help people out of precarious work, people couldn’t be convinced to change if their current situation was working for them.

“I go back to one thing – if you find what you’re doing is profitable, you’ll continue to do it no matter what interventions are put in place.

“If you sat at one of the coffee bars on Cavendish and Great South Rd, you’ll realise how many people work it.

“I believe you’ll be astounded at how many people are working that intersection.”

When police spot window washers, they fine them $150.

But in five years, police say just six people have paid up – five from Counties Manukau and one from the Central policing district, from Taranaki to the Manawatū.

Filipaina said he suspected many unpaid fines would be turned into community service hours.

He said if police didn’t have the ability to fine window washers, the problem would be even greater.

“If we take the offence away, it’s going to be open slather and our intersections are going to be blocked with people.

Stuff asked police for an interview, but no-one was made available.

In a written statement, Counties Manukau inspector Adam Pyne said tackling the issue was a job for the wider community, as well as police.

The reasons behind people doing it weren’t just a matter for police, but also other groups.

“Police continue to see a range of age groups involved in window washing.”

Aucklanders tell us the last time they saw a police officer out walking the beat, and whether higher police visibility would ease safety worries for retail workers.

Pyne said tickets were just one way police deal with the situation.

“Depending on the circumstances and the ages of those involved, referrals are sometimes made to other organisations,” he said.

“Our advice to the community continues to be to avoid endorsing this type of offending by not giving any money to window washers.”