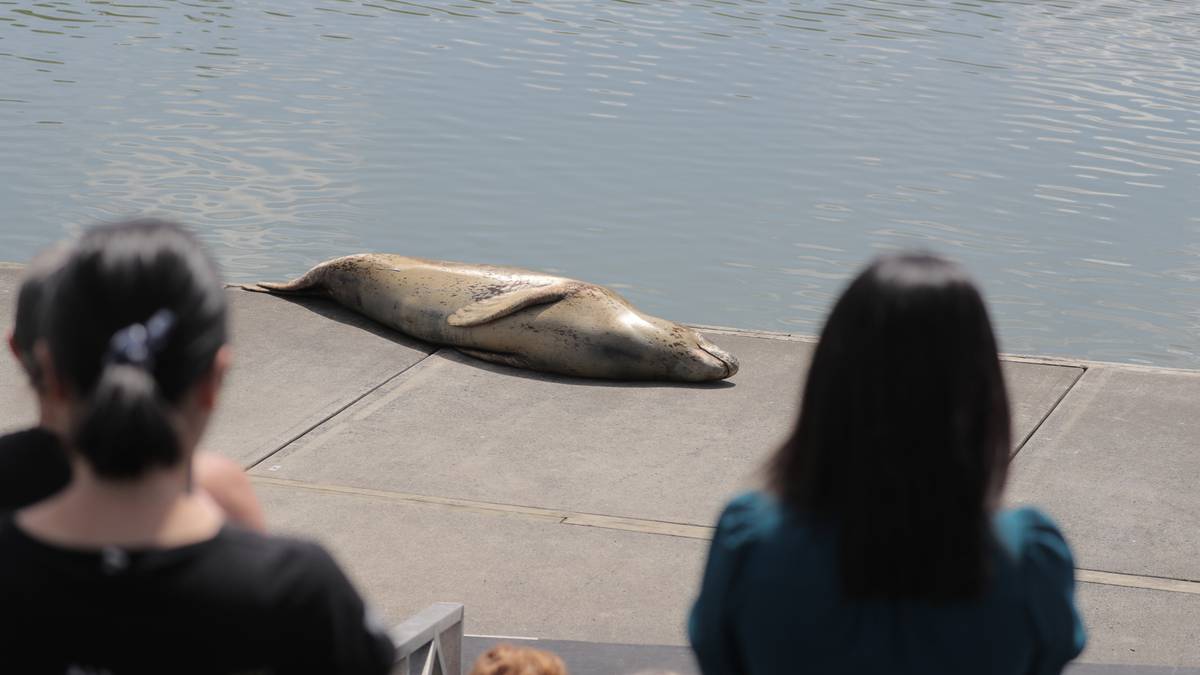 Owha the leopard seal is a regular visitor to Northland and Auckland, delighting people with her presence, but new research shows that the seal can change her spots. Photo / NZME

While it’s said leopards can’t change their spots, it turns out leopard seals can.

The research on the leopard seals’ markings is the first of its kind.

According to the paper – Can a leopard seal, Hydrurga leptonyx de Blainville, 1820 (Mammalia Phocidae), change its spots? – at least one female can, producing extra spots on her body.

Visser and her team studied extensive footage and photographs of Owha – a 3m long adult female leopard seal who has frequented New Zealand waters regularly since 2012 – before reaching their conclusion.

Visser, the lead author of the study and co-founder of LeopardSeals.org, said the team was interested in exploring the importance of leopard seal spots.

Specifically, they wanted to know how reliable spot patterns were for matching individuals.

“Just like us, leopard seals can be individually recognised – think of these spots as their version of a fingerprint,” Visser said.

Counting individual spots may sound peculiar but Visser and fellow researchers did just that.

Researchers used a baseline of 40 spots on one side of Owha’s face and were able to show they remained stable.

The technique, Visser explained, had been successfully used for leopard seals for more than 20 years.

“We wanted to know if there were long-term spot changes and, if so, did they matter,” Visser said.

By studying one body zone on Owha – when she was both wet and dry – researchers were able to map the spots in her fur and watch what happened over time.

Sarah Richard, who started out with LeopardSeals.org as a volunteer and is now a co-author on the scientific publication, became excited as they matched spot after spot.

“[…] it became clear to us all; every spot could still be seen four years and eight months later.

“By mapping an abundance of spots, over a long period, we verified the methods used by scientists around the world,” she said.

Researchers were also intrigued by an additional 10 spots, none of which obscured the 40 original spots.

Visser said a few spots may not seem a big deal, but they are vital for the conservation of the species.

“[…] They act like natural tags that don’t fall off and using them allows us to monitor individuals over time to better understand how long they live, follow their movements as they travel, as well as understand behaviours such as hanging out in urban areas.”

Visser hoped they could share their fascination and respect for the species as people become more aware of leopard seals and the science conducted by the team continued.

As little is known about leopard seals, studying individuals could allow for major scientific breakthroughs internationally.

The public is urged to report any leopard seal sightings by calling 0800 LEOPARD for via www.leopardseals.org.

People should try and take a photo or video during the sighting along with noting the time and location.

But adhere to Department of Conservation guidelines by staying at least 20m away and remember to move gently when taking photos and use a zoom lens with no flash, remain quiet and do not feed or touch the individual.

■ Leopard seals have a long, slender body and a spotted coat. They have huge heads with enormous jaws.

■ Diet: Leopard seals are well known for preying upon penguins. However, their diet is in reality highly varied and changes with seasonal and local abundance of prey. Leopard seals will consume krill, fish, squid, penguins, seabirds, and juvenile seals including crabeater, Southern elephant and fur seals.

■ Range: Leopard seals are widely distributed in Antarctic and sub-Antarctic waters of the Southern Hemisphere, occurring from the coast of the Antarctic continent northward throughout the pack ice and at most sub-Antarctic islands. They are not commonly found in New Zealand waters.

■ Habitat: Leopard seals haul out on ice and on land, often preferring ice floes near shore when they are available.

■ Population: Currently a widespread and abundant species. The latest studies estimate a population of at least 35,000 individuals but that estimate is probably low.

■ Predator: The orca is the only known predator of leopard seals