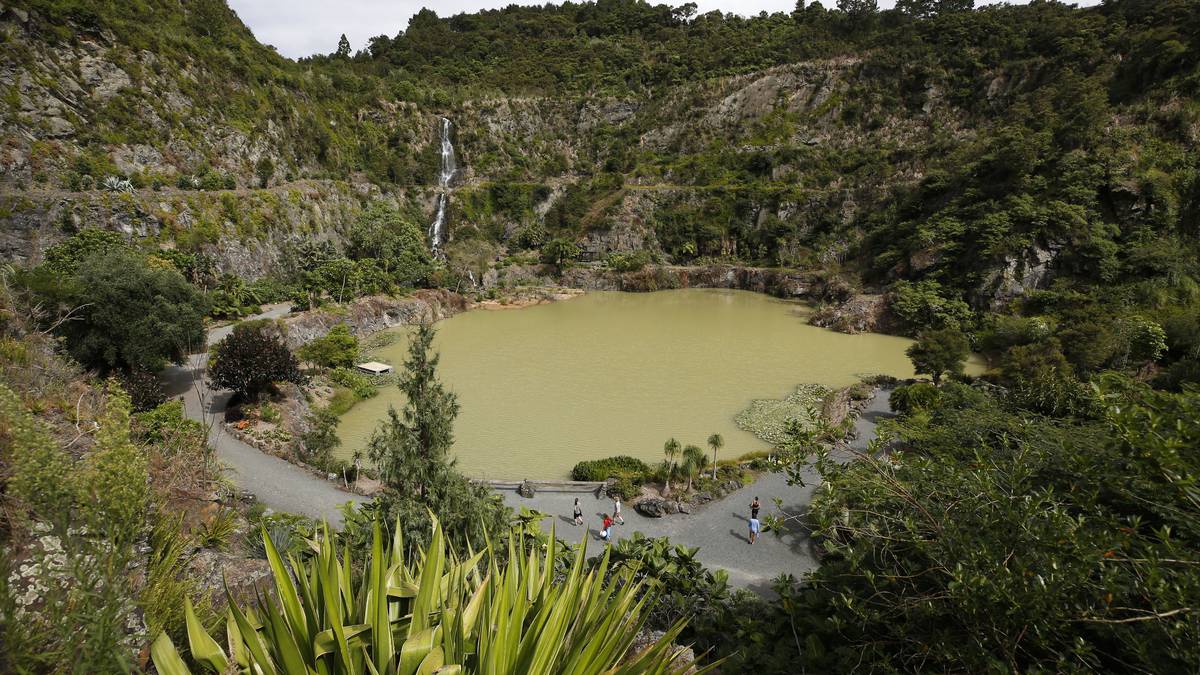 In the Western Hills of Whangārei City, Whangārei Quarry Gardens are full of colours, birdsong, towering rock faces, and a range of subtropical plants.

At first, it looks like a natural valley, but a further stroll through the roughly 15-hectare gardens reveals industrial remnants of a quarry.

The concrete is a reminder of the quarry’s rich history, and how far it’s now come in its 25 years as a community project.

So far in fact, it’s now gained a five out of six star recognition from the New Zealand Gardens Trust.

The impressive achievement has put Whangārei firmly on the map, a massive feat from a group of passionate volunteers.

Gardens manager Guy Hessell described himself, the volunteers and trustees as “ecstatic” about the news.

He said visitors after often in awe of the gardens when they visit.

“They’re never seen anything like it really,” he said, “they’re sort of in awe of what we’ve done with a disused quarry.”

Reminders of the heritage of the area are seen throughout, from crumbling remains to rusty wheels.

Even the bluestone that covers the paths through the quarry was originally mined there.

Visitors can either walk through the gardens themselves or book an hour-long golf cart tour. There are waterfalls, quarry ruins, tunnels, forest trails, a lake and of course a range of subtropical plants to admire.

There are more than 200 types of camellia to admire, a range of native plants, and a five senses garden that is often a hit with the kids.

Around 70,000 people visit the gardens each year, but Hessell said more are expected after upgrades to the carpark, which will allow tour companies more room and easier accessibility.

The Garden Discovery Trail and Sculpture Northland also brings in visitors, who have often never visited the gardens.

Reaching five stars wouldn’t be possible without the dedicated volunteers, but Hessell explained many of the volunteers take their work seriously.

“They’re quite passionate and involved with it,” he said, “some of them have seen its full development and have a vested interest to make sure it reaches its full potential.”

Many volunteers who have worked on the gardens have been there since their inception, including Albert Blumhardt.

He’s been there from the beginning, and his favourite thing about the gardens is “the camaraderie, and the fact that we’re actually achieving something for the city”.

The old quarry site is a constant work in progress, with ongoing improvements, changes to gardens, and fixing of issues.

A garden based in an old quarry might sound ideal, but the area has suffered its fair share of setbacks, including multiple slips and drought.

“The weather and topography of the land makes any rainfall event a bit of a challenge,” explained Hessell,

“We’ve just had one big slip in the Arid garden, we’re really up against it, it’s us v nature,” he said.

The gardens also suffered a series of arson fires in 2005 and 2006, which saw 2.5 hectares of native bush, including young kauri trees, burned to the ground.

A 19-year-old man was charged with six counts of arson, with four relating to the Quarry Gardens fires.

Covid-19 was a new threat, but Hessell said they had permission for some volunteers to come in and water the gardens.

He said it took a “couple of weeks” to get the gardens up to standard after the month-long lockdown, “it wasn’t too bad,” he said.

Another dedicated gardener, Lorraine Young, said she likes volunteering because “you can’t do this kind of big stuff at home by yourself in a quarter-acre section.”

“So it means you can extend what you’re doing, both physically and mentally.”

Marion Buckler said when she began, the site was “just rocks and weeds.”

“There were no plants here,” she said.

Her mother, May Hansen, played a major role in creating the gardens. She continued to volunteer until she was 94, with her daughter now carrying on the legacy.

“I like it all,” she said, “in general it’s just a lovely place to work, and there’s the family of volunteers.”

Bev Foggarty, who is in charge of keeping the Arid garden up to scratch, has spent roughly 15 years volunteering at the gardens.

She enjoys talking to the people that come through, as well as seeing the end result of hard work.

“It’s been slow progress,” she said, “I try to keep it true to succulents and cacti only. When I started here it was all overgrown, there wasn’t much in here.”

Foggarty took on the gardens seven years ago, which now draw in California Quail which she likes to watch “toddle down” in the mornings for dirt baths.

Hessell said future plans for the gardens include looking at creating a “virtual tour” of the garden, as well as having a gravity fed irrigation system, which would give more time to work on the gardens themselves.

The immediate priority, however, is reaching the six star mark.

“That would bring it up to international level,” said Hessell.