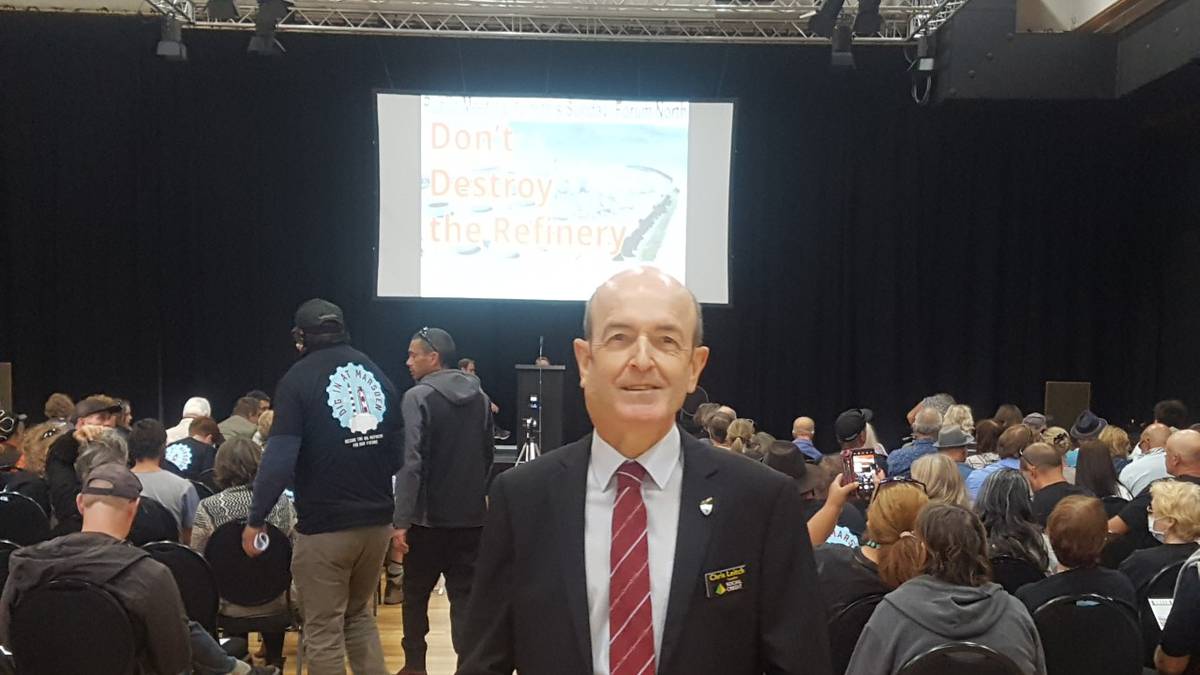 Social Credit leader Chris Leitch, pictured at a Save the Refinery meeting he organised in Whangārei in April last year, will be remembered with a celebration of his life on February 4.

Celebration of the life of Chris Leitch

A celebration of the life of Social Credit leader Chris Leitch, from Whangārei, who died last week, will be held next month.

Leitch died on Friday, after a battle with neck cancer, and a celebration of his life will be held at In Step Dance Studio – where he taught dancing to many Northlanders – from 2pm on February 4.

It will be a gathering to share favourite memories and dance, if people wish, in his honour.

Leitch, who was 70, is survived by his wife Anne, son Andrew Leitch, step-daughters Tracey and Darian, and brother Tim Leitch.

Leitch was a long-time activist for Social Credit, having held just about every position in the party since he first became involved in 1972, a feat for which he was awarded life membership in 2012. His father was a candidate in the 1960s and his brother has also been a candidate several times.

Northland could get yet another bout of heavy rain, just in time for the long Anniversary Weekend holiday.

MetService says a weak ridge will cover central New Zealand on Wednesday, moving slowly eastwards, while an easterly flow affects northern New Zealand. On Friday, a sub-tropical low is likely to approach the country from the north, with the potential for heavy easterly rain to affect Northland from Friday onwards. There is low confidence that warning amounts of rainfall may eventuate.

A touring multi-media exhibition that amplifies Māori women’s voices around Aotearoa is coming to Hihiaua Cultural Centre, Whangārei from January 28 to March 4. The exhibition, called Wāhine, offers our communities the opportunity to be enriched by their life stories while fostering mutual understanding.

Through personalised sound stories and portrait photography, Wāhine is an immersive exhibition inviting communities to come together, be inspired, and learn from the raw, honest, and vulnerable stories of Māori women.

An almost $500,000 project to upgrade three carparks in a Doubtless Bay summer hotspot has been completed. The work included sealing a gravel parking area and installing concrete kerbing to prevent vehicles parking on the grass verge at the Cable Bay beachfront opposite the dairy; enlarging and resealing the northern Cable Bay car park, opposite Stratford Drive, providing a large area suitable for campervans; and sealing and marking the carpark outside the Cable Bay public toilets. The $476,000 project was co-funded by the Far North District Council and the Government’s Tourism Infrastructure Fund.

Park upgrade back on track

A $750,000 upgrade to Memorial Park in Kaikohe is back on-track after supply chain disruptions halted work at the end of last year. The new playground will include a wheelchair-accessible merry-go-round, in-ground trampolines, slides, a sand play area, swings, and an ‘eagles’ lair’ rope-climbing tower. The slides, swings and a samba drum were installed at the end of last year. The eagles’ lair will be installed from February 1 to 3 and will require the closure of one corner of the playground. Also part of the revamp are new entrances, upgraded footpaths, a learn-to-ride and balance bike track, a toilet block and a loop track linking all areas. Next week, park seating and picnic tables will be installed, with a crane to be used to shift existing concrete picnic tables. Barbecues will also be installed, but will not be ready for use until power is connected in early March. The playground will close from February 13 to 24 while a rubber safety surface is poured and allowed to cure.