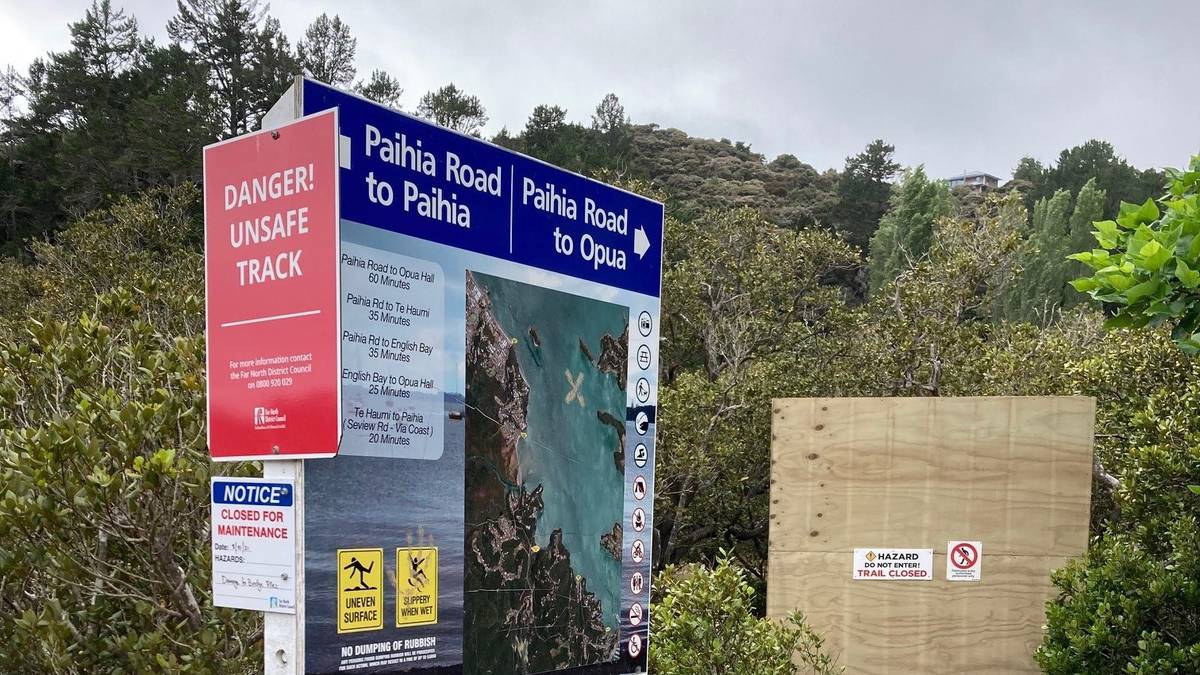 The Ōpua-Paihia Coastal Track, which forms part of the Te Araroa long-distance trail, has been closed since late 2021

A popular walking track in the Bay of Islands has reopened just in time for the summer holidays — but more work will be needed in the New Year. A section of the Ōpua-Paihia Coastal Track, near the entrance to Paihia Top 10 Holiday Park, closed in late 2021 when a bridge and boardwalk were found to be unsafe due to rot and marine worms. The track is popular with dog walkers and provides the only pedestrian link between Paihia and Ōpua. Rebuilding was delayed due to wet weather in November and the discovery that more piles needed replacing than originally thought, but contractors have now completed the new bridge and boardwalk and installed temporary safety rails. They will return to the site on January 9 to install permanent rails and complete other elements of the job, which means the boardwalk and bridge will be closed on weekdays for three weeks from that date. It will, however, be open during weekends. Council infrastructure manager Andy Finch thanked Steve Bowling Contractors for their efforts to make up for lost time and get the track open before Christmas. “Obviously, we all would have liked to see the job completed in full, but I appreciate that some delays were beyond their control. They understand how important this pedestrian link is to both locals and visitors, and I’m grateful that it will be open over the peak holiday period.” A staged upgrade to the entire track would start in 2023.

Police who disrupted a mail thief in Northland have compiled a variety of stolen items in the hope of reuniting them with their owners. A 49-year-old man has been arrested and charged with multiple counts of theft, following numerous incidents where items have been stolen from letterboxes at addresses between Whangārei and Mangōnui. Police now need to identify the owners of the property, so they can match up stolen items with rightful owners. Anyone who has had property stolen from the mail is encouraged to get in touch with police, and provide a description of their item. Please contact david.reynolds@police.govt.nz with proof of ownership to reclaim your missing mail.

Northland is in for a warm and wet start to the New Year. MetService said today should start out fine but showers should descend on the region from this afternoon and evening. Tomorrow will likely see more showers, particularly along eastern Northland, with more showers on Monday and Tuesday, with some of them heavy downpours. However, while the region will have a wet start to 2023, it’s also going to be warm, and muggy at night. Overnight temperatures will be up to 17-19C over the next few days, with daytime highs in the mid 20s.

Dog owners heading to Far North beaches this summer are being urged to be extra vigilant for the New Zealand dotterel (tūturiwhatu) because the birds nest above the high tide line at this time of year, making them extra vulnerable. Taupō Bay, on the east coast between Totara North and Mangōnui, is hugely popular with holidaymakers but is also a favourite nesting ground for tūturiwhatu, so dogs are prohibited all year round at the southern end of the beach. Dogs can use the rest of the beach with some extra restrictions during summer. A Far North District Council spokesperson said animal management officers would conduct random checks at popular holiday spots to remind dog owners of their obligations. Once widespread and common, today only about 2500 dotterel remain, making them rarer than some species of kiwi.

A Go Fund Me page has been set up to help a Whangārei family whose homestead was completely destroyed in a Boxing Day blaze caused when fat dripped on to a deck from a barbecue. Olivia Heremia, 59, who was raised in the Portland home alongside her siblings, said the family had lost more than 70 years of memories in the fire. The two family members living in the home at the time had lost everything, she said. People can make donations by visiting www.gofundme.com and searching for Boxing Day tragedy. See bit.ly/3C9VAjb or alternatively, email editor@nzme.co.nz to arrange dropping off donations.