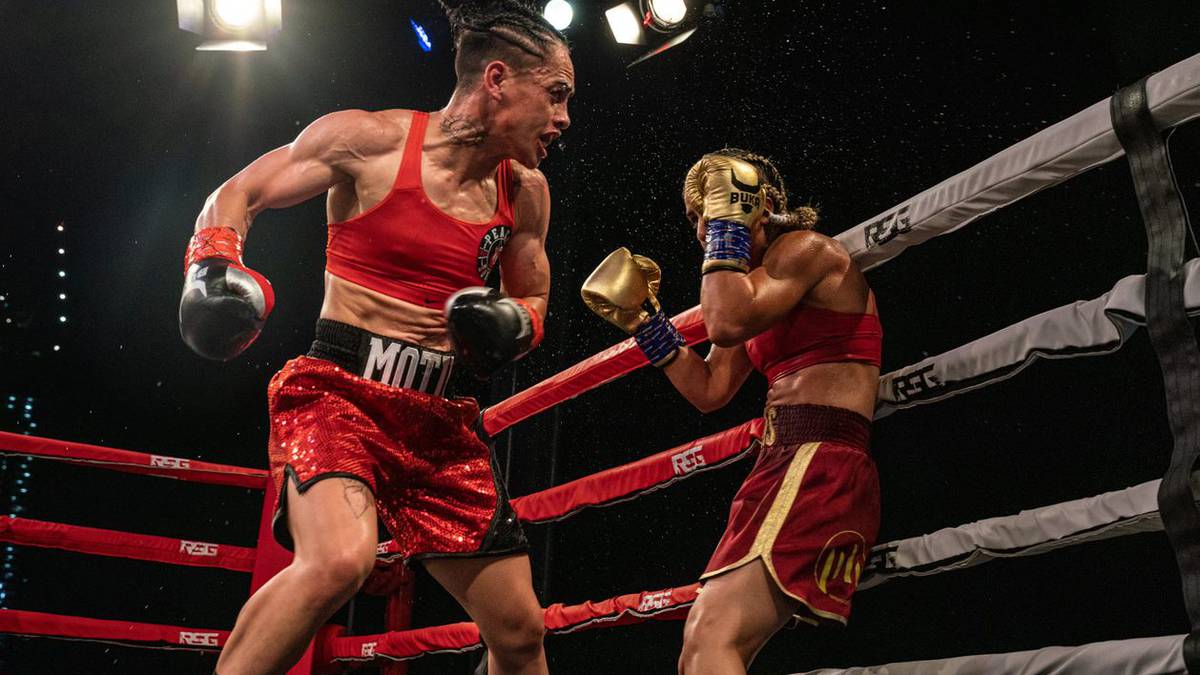 Beneath a canopy of stars in the sweltering heat at the Hilton Palm Jumeirah in Dubai at the weekend, Motu, who hails from Kaitaia, captured the title after overcoming Iran’s Nastaran Fathi via a split decision.

The final scorecards read 77-75, 77-76 for Motu, with one judge scoring the contest 77-75 for Fathi. The win took Motu’s record to 15-0, 6 KO, as she handed the previously undefeated Fathi the first loss of her career.

The explosive eight-round encounter won the Fight of the Night award, with both fighters giving everything they had, knowing that a title and a WBC world ranking were on the line.

Motu got the ball rolling right from the outset, landing several heavy shots in the opening round. The hard right hands that Motu connected with staggered Fathi and stopped the Cuban Boxing Club-trained fighter from establishing her offence.

The 32-year-old Motu displayed her trademark aggression throughout the bout, despite an early head clash leaving swelling over her eye. Fathi, to her credit, maintained her composure in the face of Motu’s constant pressure but continually came off second best throughout the exchanges.

The pace of the fight meant that neither woman was allowed an opportunity to catch their breath in the oppressive heat, and Motu was as relieved as she was happy to have her hand raised in victory following the bout’s conclusion.

The mother-of-five was emotional following the win, thanking her trainer, Isaac Peach, and her team in her post-fight interview.

“I have had a hard life, and my coach and his wife saved me. I am just so grateful for all the people bringing me here,” she said.

“I want to say a big thank you to Mum and the biggest thank you to Alina [Peach]; she is back home, and it was really hard to be here without her. She has worked so hard for me, and I love her and my family back home in Pukepoto. My kids are my strength.’’

This fight was undoubtedly Motu’s toughest test to date, as she overcame not only a highly regarded opponent in the form of Fathi but also the Dubai weather, which was a battle in itself.

“I am glad that it’s over, but gosh, I just had to bite down because of the heat; it felt like a heatwave,” she said.

“She [Fathi] was definitely trying to give it, but I felt like I was stronger. So I had to not box and just get ruthless and fight.”

Peach had nothing but praise for his fighter, who was competing outside of Aotearoa for the first time in her career.

“It was tough. After the first round, Mea’s energy was down, the time difference, and everything was a bit harsh. It was hot, it was difficult, but I thought we won most of the rounds, and after four rounds, they [the judges] came back and had it even. So it started getting really difficult,” he said.

“We had a terrible head clash in the first round, it was a big swollen lump, and we got a terrible cut above her eyelid; nothing went our way. So for Mea to dip deep and bring it out was amazing; I’m very proud of her.”

Motu’s win should earn her a ranking with the WBC, and she is also currently ranked with the IBF. The IBF and the WBC are two of the most prominent sanctioning bodies in world boxing, which will see even more doors opening up for Motu in the coming months.

“This was a big learning curve, and now it’s just only up from here,” Motu said.