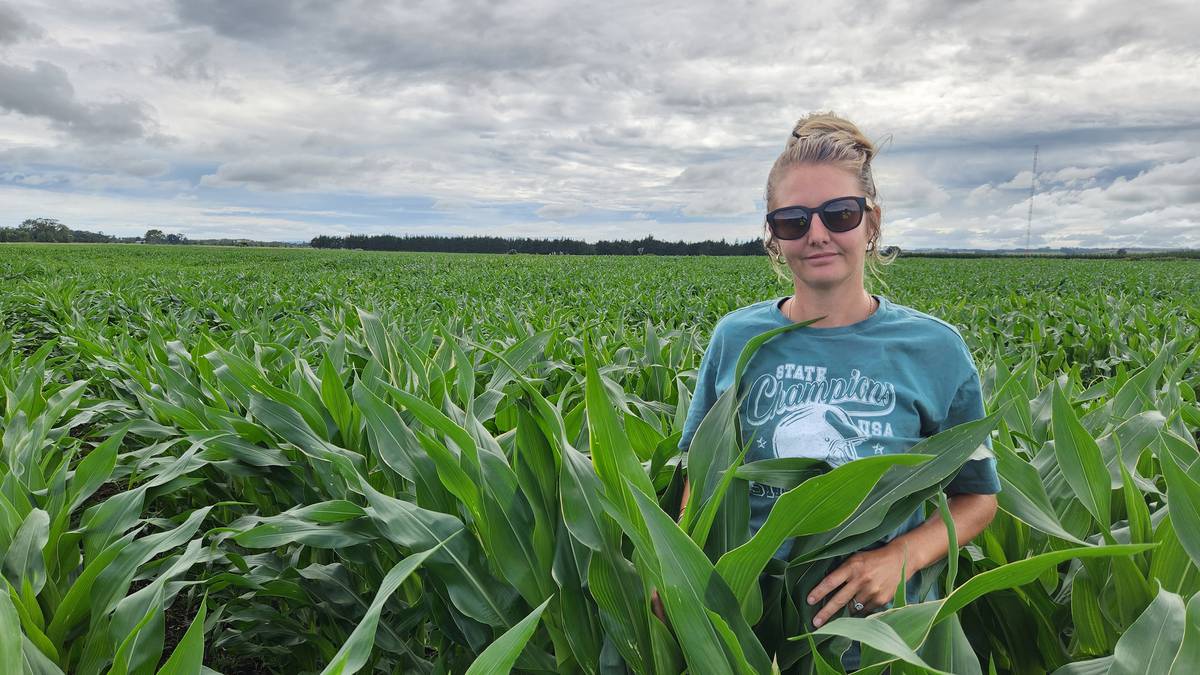 Awanui dairy farmer Leah Frieling is one of many Far North farmers who have had issues with last year’s crops which were harvested in March. Photo / Supplied

A nasty plant pest from across the ditch may be “annihilating” Far North farmers’ maize crops, but Biosecurity New Zealand says fall armyworm can’t be eradicated and is here to stay.

Fall armyworm was detected in New Zealand in February after being carried on storm fronts from Australia, and is now causing concern for farmers as it’s hiking the cost of growing the essential feed while also producing devastatingly low yields.

Since September 1, there have been 24 confirmed new positive detections of the pest which have spread from Kaitaia down to Whanganui in both maize and sweetcorn, Biosecurity New Zealand said.

Awanui dairy farmer Leah Frieling said she’s one of many Far North farmers who have had issues with last year’s crops which were harvested in March.

While she and her husband usually get a 500-tonne crop, which they grow to feed their 750 cows during winter when grass growth is reduced, they were lucky to get 300 tonnes, and one crop only had a seven-tonne yield.

“It was annihilated,” Frieling said.

“We thought it was the normal cosmopolitan armyworm going through the maize.

“I had to spend a lot more money and buy more concentrates in, the cost was huge.

“I don’t know if MPI took it seriously enough knowing we had it in last year’s crop.

“We still don’t have any on-label products to help us battle it now.”

The Frielings got a pest control company in and set traps, catching two moths which they sent to MPI in February.

The moths were confirmed to be fall armyworms.

Frieling said Far North farmers have received “limited guidance” from MPI about what to do, and many are trialling different sprays “to see what works and what doesn’t”.

“They said they didn’t expect it to last the winter… it would have been flooded out of the ground.

“But it’s here full strength and it’s very early on in the season. People are planting and their crops are riddled with it already.

“Every farm I know with maize has been monitoring it closely with traps – I haven’t heard of anyone that doesn’t have it.”

Fall armyworm is a plant pest that can feed on over 350 plant species, preferring grasses and cereals, especially sweetcorn and maize.

MPI says there have been “isolated detections” since it was found in New Zealand with most finds happening over summer and autumn because the pest thrives in warmer climates.

Frieling said the worm burrows deep into the whorl of the plant, making it hard to kill with spray.

A common armyworm might eat the top inch of a plant, “but these burrow and eat nearly 80 per cent of the cob.”

Mark Dunham from Northland Seed and Supplies said the “majority of maize paddocks we service north of Kaitaia are infested with fall armyworm”.

“And we have found more isolated populations through the rest of Northland.

“There is a sense of frustration from farmers. It is sometimes taking over two weeks to get identification of moths back from biosecurity and the solutions and control methods are held back from farmers due to regulations.”

Will Tye said he identified fall armyworm on his maize crop two weeks ago.

The pest was currently at a “moderate level” on his Awanui farm, he said.

“But it’s probably something that’s going to be expensive because we’re going to have to do it again and again.”

Tye said if he doesn’t have success with the spraying methods he’s currently using, he will consider not growing maize in future.

This will mean he’ll have to buy imported feed “or find feed from somewhere else”.

“The cost to your crop over the whole year goes up a lot and your yield can be a lot lower.

“If left unchecked it’ll take out your whole paddock.

“Fall armyworm in particular can be quite devastating to the crop. It’s another thing to worry about.”

So far 300 pheromone traps have been deployed across Northland, Auckland, Waikato, Taranaki, Manawatu, Marlborough, and Canterbury as part of the better border biosecurity research programme.

The programme was established to understand the survival, distribution, and potential impacts of the moth pest in New Zealand.

“These are being monitored weekly by growers, industry representatives, and research staff,” Biosecurity New Zealand’s director of readiness and response John Walsh said.

“Because it has been windblown from Australia, this is likely to repeatedly occur.

“However, because of New Zealand’s relatively mild climate, fall armyworm are not likely to have the number of breeding cycles in a season as they do in the tropics.

“Due to this, they are not expected to be as problematic a pest as they are in the tropics.”

People who suspect they’ve got a fall armyworm problem are urged to take a photo (of caterpillars at least 2cm long) and call Biosecurity New Zealand’s Pest and Disease Hotline 0800 80 99 66. Or report it online at report.mpi.govt.nz/pest.

What is fall armyworm?