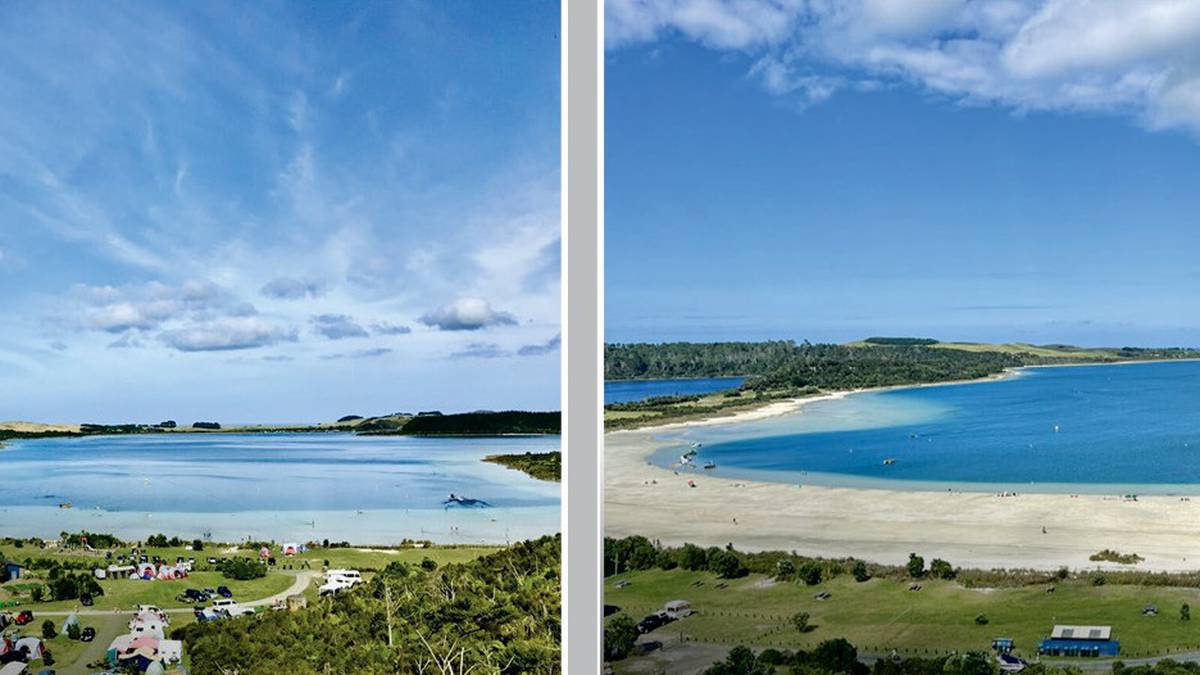 Photos taken by holidaymaker Jodi Bennett show the difference in Lake Taharoa’s water levels. From left: the lake in 2018, and again in 2023.

The ebbing water in Kai Iwi’s largest lake has kindled concerns among people that one of Northland’s natural jewels is vanishing.

Despite the relentless deluge of rain, drier weather is likely to blame for Lake Taharoa’s lower-than-average water levels.

Holidaymaker Jodi Bennett alerted the Advocate to the potential worry after it showed up on her radar on her trip north this month.

The water level at Northland’s deepest lake was the lowest Bennett had ever seen it in the 15 years she had been making a summer pilgrimage to Kai Iwi Lakes to camp.

Bennett said Lake Taharoa had fluctuated year to year but not to this extent.

“This year we were driving up thinking it has been such a wet and rainy summer that the lake would be super full.”

But as the lake fell into view on the final stretches of the family’s journey, Bennett was shocked.

“It was like the plug had been pulled out,” she said. “I’ve never seen it that low.”

Bennett wasn’t the only person concerned about the lake’s water level. The other families camping alongside hers were also asking questions.

“Is it going to keep getting lower,” Bennett said. “What is happening?”

The smaller lakes on either side of Taharoa – lakes Waikere and Kaiiwi – were still “chocka”, she noted.

Ruben Wylie, Pou Tiaki Taiao – group manager of environmental services, said the lowest water level at Lake Taharoa since 1995 was recorded in May 2022.

“We believe lower than average rainfall over the last several years is likely to be a key reason for the decrease in the water level recorded in the lake.”

This may come as a surprise given Northland recorded its wettest November since 1943 as more than five times the monthly average rainfall doused the region.

But regional council data showed a 28 per cent reduction in rainfall last year at the lakes compared with the long-term median.

The recent spate of downpours may have faded the memories of a prolonged drought that plagued Northland from 2018 to 2020.

A draft council report assessing Lake Taharoa’s water levels stated: “Evaporative water loss has increased since 2003 as a consequence of dry weather while rainfall over the lake has decreased since 1986.”

During February 2021 and March last year, the lake’s level fluctuated over a range generally less than half a metre in response to rainfall and evaporation patterns.

Although the lake has a vast depth – a 38m drop at its deepest point – a shallow shelf hugs its perimeter.

“This means that a small reduction in water level can result in quite a large reduction in the surface area of the lake,” Wylie said.

“The lake’s large surface area means a large amount of water is also lost due to evaporation.”

“There are no consented farm takes from the lake.”

But he said the Kaipara District Council does hold two existing water take consents. One is for the Kai Iwi Lakes Campgrounds water supply and the other is for the public toilets at Promenade Point.

“The combined effect of these water takes on the lake level is very minor, even during periods of dry weather, when compared to natural variations in the lake level.”

Abating waters put the shallow habitat at the lake’s edge at risk of decline.

Wylie described the fringe of the lake as home to native plants and animals that included a population of rare fish species – dune lake galaxias.

“We will continue to monitor the lake both in terms of water quality and water levels to ensure we have a good understanding of the health of the lake over time.”