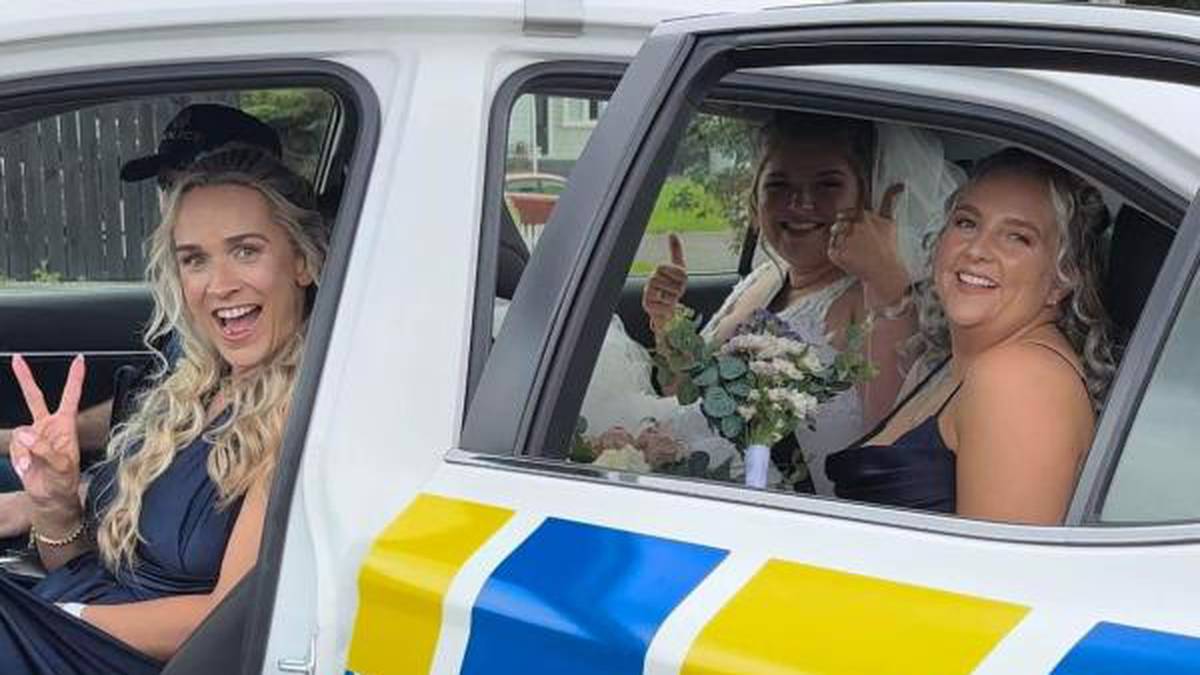 The bride and her bridesmaids were pretty stoked to be delivered to the ceremony thanks to Senior Constable Adam Groves. Photo / Supplied

Senior Constable Adam Groves has had a career full of emergencies but it was a first when he delivered a bride and her bridesmaids to the ceremony after they were left stranded on State Highway 1 in Northland.

Newlywed Paige Cradock describes being in a pickle on the side of the road at Springs Flat after the wedding car, a gleaming yellow Chevrolet, came to a grinding halt on the way to the ceremony at Glenbervie – 8km away.

“A minute before this I was just saying how great it was to have the wedding as we had to cancel due to Covid restrictions last year.”

She had also previously postponed the wedding a year before as she and her partner Scott, now husband, had decided to use the money to buy a house instead.

“The hood was up and my partner’s uncle was trying to get it started again but it wasn’t going to happen.”

Enter Groves in a shiny white, yellow and blue police car. He was on his way home after attending the Hikurangi Christmas parade as part of the police team that helped with traffic management and a display promoting police and our partners.

“Adam drove past and saw us on the side of the road in a pickle. Luckily, he turned the car around and had a chat to my aunty who explained what had happened. He offered to drop me and my bridesmaids off to the wedding.”

A member of the public had also stopped and offered help and was able to take two of the four bridesmaids.

“Adam said he was clocking off so we really appreciated his kindness and generosity to be able to take us. It was my first time ever ride in a police car. It’s nice to know the police help out people like me, in need, on the side of the road.”

As a former mechanic, seeing the classic car with its bonnet up on the side of the road piqued Groves’ interest.

“I saw the car broken down and as an ex-mechanic, I stopped to see if there was anything I could do to lend a hand,” Groves said.

His technical mechanical assessment: “The car was shot.”

Fortunately, the patrol car had been cleaned and vacuumed for the Christmas parade so it was fit for a bride and her entourage.

“I offered to take them and delivered them to the reception.”

There were a few surprised faces when the bride and bridal party arrived with red and blue lights flashing.

“It was a case of third time lucky,” Cradock said. “It’s one for the books and will be a great story to tell my two girls when they are older.”

Kamo Station Sergeant Paul Nicholas said: “This is typical of Grover going the extra mile […] he’s a bloody credit to the community.”