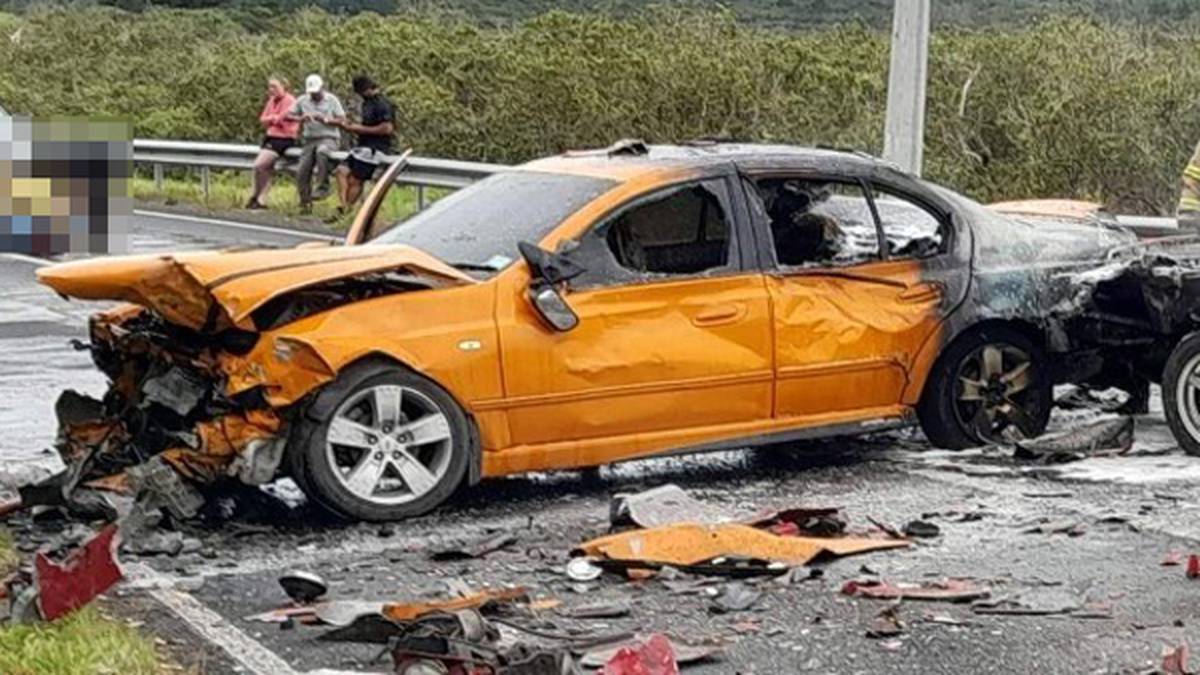 One vehicle, a 1974 Corvette Stingray, was completely destroyed in the head-on crash and ensuing fire. Photo / supplied

Two Rawene hospital workers are being hailed as “absolute heroes” after dragging three people from the burning wreckage of a head-on crash.

Saturday’s horror smash has prompted police and emergency services to again call on motorists to slow down and make sure they stay alive to see their families this Christmas.

A 1974 Corvette Stingray and a Ford Falcon collided on Rawene Rd about 1.25pm.

The fibreglass Stingray ignited on impact and the flames then spread to the other vehicle. Both cars were engulfed and the sports car completely destroyed.

Rawene fire chief Zak Bristow said he was amazed no one had died in the crash.

Among the first people on the scene were two “exceptional heroes” who dragged all three patients away from the flames, then provided first aid.

They remained with the injured when medical treatment began and did not leave their sides until all three had been taken to hospital.

Bristow said the pair worked at Hokianga Hospital in Rawene but were administration staff, not doctors or nurses.

“They are normal run-of-the-mill Kiwis but they got in there, they got the people out, then stayed with them the whole time. I think they are absolute heroes.”

He believed the woman driving the Falcon was on holiday. She had lost all her belongings, down to her phone, in the fire. The firefighters had been in touch with her at Whangārei Hospital, he said.

Bristow said the crash happened on a corner with a 55km/h recommended speed.

The injuries in both vehicles were “horrific”, he said.

Firefighters from Rawene and Kaikohe responded along with two ambulances, two rescue helicopters and police.

“People just need to slow down. It’s Christmas time. Have your fun around the Christmas tree, not out on the road,” Bristow said.

A spokesman for St John said two patients were taken to Whangārei Hospital by helicopter, one in a serious condition and the other moderate. The third patient was taken to Bay of Islands Hospital by ambulance in a moderate condition.

Margareth Broodkoorn, the chief executive of Hokianga Health, said the whole organisation was “very, very proud” of how the staff members — one a community worker, the other a manager — had helped the injured motorists.

With the Northland road toll at 35 – eight higher than at the same time in 2021 – he said driver behaviour needed to change urgently.

“The trauma our staff are seeing on Northland roads as a result of vehicle crashes is completely unnecessary. We say it time and time again that people just need to slow down.”

Police would be out in force over summer and focusing on four of the most common factors in Northland crashes: restraints, impairment, distraction and speed, or RIDS for short.

“Then there’s the issue of people being patient and tolerant on our roads, especially over the summer holiday period when there’s an influx of holidaymakers and Northlanders returning home. With a big increase in road users there will always be delays but there’s no rush to get to your end destination.

“We want people to arrive at their destinations safely. We don’t want a loss of life or injury through impatience, inattention, distraction, impairment, not wearing seatbelts, speeding, or dangerous passing manoeuvres,” Korach said.

“None of us want to be picking up the pieces at a serious or fatal crash because those incidents scar families for a lifetime. Every time there’s a needless crash on our roads, emergency services in Northland can’t attend to other incidents, leaving more people vulnerable.”

“We see the trauma, and it’s sad and upsetting. We’re all part of the community and don’t want to see harm to our children, family, friends or work colleagues,” Davis said.

“What we’d like to see this summer is people taking far more caution on our roads and not putting themselves or others in danger,” Couchman added.

The summer holiday period is usually the busiest time of year for the rescue helicopter with up to nine flights per day.